"We are taking the surface and subsurface tests at the exact same time so we have a true understanding of what is coming off the surface water under different conditions and how much is coming out of the tiles," McClure said.

There are 32 water-monitoring sites across Ohio. The state has moved to get a better handle on how phosphates move in the soil and the connection between rainfall events and lost nutrients.

Ohio is just one example of a drive to embrace soil-health practices that may be the saving grace for voluntary conservation on farms across the country.

University Extension staffs and local soil districts, meanwhile, are mapping watersheds and using GreenSeeker technology and other strategies to identify hot spots for nutrient loads in waterways. Government officials, utilities and others want farmers to commit to practices that reduce nutrient loads and potentially create a viable market for water-quality trading projects.

Water quality is in the spotlight in Iowa for various reasons, most notably a federal lawsuit by Des Moines Water Works against upstream drainage districts and counties over high nutrient loads, mainly nitrogen. Iowa's nutrient-reduction strategy calls for a 45% reduction in nitrogen and phosphorus loads in water. That requires a suite of practices across the state to be implemented. Farmers are about halfway toward the goal when it comes to no-till practices but fall short in areas such as cover crops, wetlands and bioreactors at the end of tiling lines to lower those nutrient loads.

Bill Northey, director of Iowa's Department of Agriculture and a farmer from northwest Iowa, said farmers need to be shown that implementing conservation practices can provide economic benefits. The public also needs to know that voluntary conservation is translating into better water quality.

"We have got to be able to measure the number of practices we are doing on the ground," Northey said. "That engagement and measuring of the activities that improve water quality are going to be important. Some of those are easy to measure, but some are tough to measure."

Dean Meyer farms near Rock Rapids, Iowa. As chairman of the Iowa Corn Growers Association committee that oversees stewardship, Meyer sees the need for conservation practices to remain voluntary. Farmers across Iowa face a range of seasonal challenges that may make it easier for farmers in one area to grow cover crops but not in another, Meyer noted.

"We have to look at the long term of what does regulation cost us or what does not having the soil for posterity cost us? So I think we all need to be advocates," Meyer said.

"We can't propose one regulation for the whole state, because what we do in Lyon County is very different than what they do in Keokuk," in southeast Iowa.

Meyer sees a growing number of commercial tools for farmers to measure nutrient needs in the soil throughout the growing season. Fertilizer recommendations from programs such as Climate Corp., a Monsanto company, and DuPont Pioneer's Encirca, which was developed through a partnership with DTN/The Progressive Farmer, are helping growers pinpoint recommendations.

Given that a high percentage of Iowa farm ground is rented, conservation also needs to be part of the discussion when farmers negotiate rental agreements, Meyer added.

Farmers in other states are already facing more regulatory oversight. In Vermont, a battle over phosphorus loads in Lake Champlain has prompted widespread criticism that voluntary conservation practices aren't working.

An EPA Total Maximum Daily Load order going back to 2011 has put pressure on Vermont farmers to reduce phosphorus levels. The reductions can be as much as 80% in some smaller watersheds feeding into the lake. A new law on phosphorus loading passed after a five-year battle. The law basically ratchets down on management at all dairies.

"This means almost every farmer in that watershed has to do things differently," said Vicky Drew, Natural Resources Conservation Service (NRCS) state conservationist for Vermont. Farmers are looking at different ways to apply manure on farm ground or use riparian buffers or grazing land that could better reduce runoff into the lake.

In Minnesota, state lawmakers passed a controversial law at the behest of Gov. Mark Dayton requiring 50-foot buffers around all public waterways and wetlands in the "Land of 10,000 Lakes" by November 2017. Another law in the state requires every ditch financed through government bonds to include a 16.5-foot buffer between cash crops and the ditch. Eventually, a 50-foot buffer will be required around all public waters, as well.

In South Dakota, Gov. Dennis Daugaard has also been pitching legislation to offer landowners tax breaks for creating 50- to 120-foot buffers along waterways.

Farmers in Minnesota complain that officials are frequently "moving the goalpost" on conservation practices and regulations. In response, the Minnesota Department of Agriculture created a state agriculture water-quality certification that provides producers some certainty against new mandates for at least 10 years if the farmers show they already meet a standard on best-management practices for their farms.

More than 250 farmers with roughly 140,000 acres have been certified under the program. Another 400 or so farmers are somewhere in the certification process, as state regulators are having a hard time keeping up with the requests for certification.

"We work with farmers to determine which best-management practices [BMPs] meet their needs," said Dave Frederickson, director of the Minnesota Department of Agriculture. "I think it's catching on across the state. It's voluntary, and if we have BMPs on the vulnerable working lands, I believe we have a better state."

Frederickson said the issues over water quality, water volume and water-holding capacity of land will continue to be a major challenge for farmers.

"Over the next 25 years, there are three things we're going to be dealing with, and that's water, water and water," he said.

TRADING ON THE BENEFITS

While the tax-incentive approach is being considered, the pitch for applying soil-health practices to water quality increasingly includes the possibility of water-quality trading. The idea is farmers could get paid for installing those best-management practices, such as no-till, buffer strips or cover crops, to keep nutrients in the field.

Generally, trading programs have been slow to develop, but they're gaining more traction, particularly in watersheds facing more EPA scrutiny. Major industries are looking to farmers to offset their own nutrient-loading issues.

"If demand is not there through permitting, then there is no trading, said Peter Hughes, president of Pennsylvania-based Red Barn Consulting. "Trading needs a regulated driver. Somebody has to be in pain to make a program work. That's all there is to it."

Trading, though, can be a potential way for farmers in a watershed to diversify their operations and get paid for environmental benefit compared to the alternative of mandates with no financial reward. "We need to start thinking about conservation as a commodity," Hughes said.

Groups such as the National Association of Conservation Districts (NACD) and American Farmland Trust have partnered on a USDA Conservation Innovation Grant to examine how conservation districts can create models for water-quality trading programs.

Data such as McClure is gathering in Ohio are important.

A 2016 study on the Western Lake Erie Basin by the Nature Conservancy, The Ohio State University and USDA's Agricultural Research Service concluded that increased environmental stewardship on farms was critical to dealing with excessive nitrogen, phosphorus and sediment throughout the watershed.

The monitoring during the past three or four years or so has gone through at least one full crop rotation to establish a baseline of nutrient loads. "The goal is to understand what we are losing in terms on nutrients," McClure said. "What is the issue, and what can we change?"

Experts in McClure's basin are pushing for a 40% reduction in phosphorus flows to ideally reduce the problems with algae blooms that have plagued Lake Erie in recent years. The goal for farmers is simply to try to keep more nutrients on the fields. McClure noted every individual farmer -- each facing different soils and slopes -- is tasked with reducing the phosphorus loads in a 4-million-acre watershed. The finicky nature of rainfall only adds to the challenge -- 2015 was one of the wettest years in history in western Ohio, while 2016 was much drier in the first half of the year.

"The point is we're not losing much on any given acre in any given year but the multiple effect of 4 million acres going into the Lake Erie basin, which is a perfect petri dish," McClure said. "We need to get everybody on board, because every acre is contributing. Some acres more than others, and some years more than others.

"This is about doing the right thing to keep nutrients on our land to make sure we're not part of the problem," McClure continued. "Or, at least we do as much as we can to keep it on the land. It will never be zero. There will never be zero nutrients leaving through our drainage, but we do need to make it better than we have now."

Ohio farmers have already seen several regulatory changes. Spreading a fertilizer of any kind requires certification -- a requirement farm groups in the state supported. "That's our way of saying on the farm that we want all of our peers to have a basic understanding of the 4-R application method," McClure said. "We think that's been proactive, and, in the state of Ohio, we actually supported that."

Ohio has also banned application of nutrients on frozen ground and before a forecasted rain event, unless it's worked into the ground. "I think if Ohio has a story, it's that everybody has been working together to solve the problem," McClure said. "Agriculture needs to do its share, but we just think it needs to be collaborative versus adversarial."

NACD has a heavy emphasis on connecting soil-health strategies to conservation. The group also stresses keeping conservation practices voluntary. "In agriculture, you aren't trying to get rid of your nutrients, because that is what makes your crops grow," said Lee McDaniel, a Maryland farmer and NACD president.

McDaniel noted there is a growing chorus of environmental groups and agricultural critics demanding more regulations on farming practices. Some are unwilling to give producers in a state or watershed more time to adapt even though producers have reduced phosphorus loads by 50% and sediment loads by 70% in the Chesapeake Bay watershed since 2009.

"Some people who are critical want instant gratification," McDaniel said. "When you are dealing with non-point source issues, sometimes there is a time lag, and you don't see results immediately. And in our society, instant gratification is getting to be pretty important." 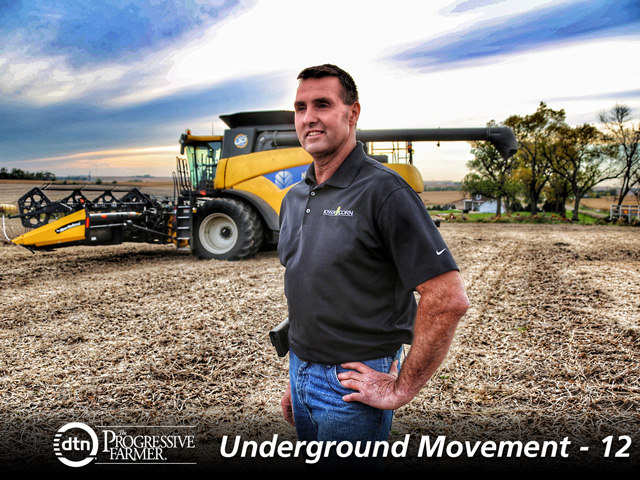