A group of farmers in northern Iowa's heavily tiled Rock Creek Watershed are voluntarily taking proactive steps to keep nutrients from leaving their land. This farmer-led watershed project in Mitchell County is resulting in a lot more green fields and a lot less tillage.

The state's Nutrient Reduction Strategy goals include a 41% reduction in nitrates and a 29% cut in phosphorus in waters leaving the land. Since 2006, Rock Creek median nitrate levels have been mostly 8 to 9 parts per million (ppm), about 2 ppm above 70 other streams sampled in Iowa. On the other hand, the flat topography has held Rock Creek median phosphorus loads to less than half of other monitored streams in Iowa.

The project's goal is to eventually have every farm in the 45,000-acre watershed under no-till or strip-till, and using cover crops. Early on in the planning process, Adam Kiel, operations manager with the Iowa Soybean Association Environmental Programs and Services team, assessed the watershed and discussed options to reach nutrient-reduction goals with about a dozen local farmers.

"When we started developing the project, a group of us who had been no-tilling, strip-tilling and experimenting with cover crops thought we were on the right track," said Dean Sponheim, of Nora Springs, Iowa. "Most of us saw water quality as an added benefit. I started strip-till and no-till to get away from spring tillage and soil crusting, and to save time, fuel and labor. But less tillage brought soil-health benefits and environmental benefits, too."

All but 40 of the 600 acres Sponheim farms with his son Josh are in cover crops. "We're seeing better soil health and higher organic matter with strip-till, and cover crops speed that process up," Sponheim said. "We can build soil in half the time if we get a consistently thick stand of cereal rye cover crop." Sponheim experimented with radish, annual ryegrass and crimson clover for two years, but now uses cereal rye as his cover crop.

KEEP IT FOR THE CROP

Adam Norby has observed his father, Steve, and uncles, Dana and Randy, strip-till all their corn since 2005, and experiment with cover crops since 2008 near Osage, Iowa.

"I've watched how that combination stopped soil erosion and built soil for them," Norby said. They no-till about 70% of their corn and soybeans and strip-till the rest. Despite tighter crop margins, they put cover crops on all their cropland last fall.

"After what we've seen with soil improvement and what we hope to get in N [nitrogen] capture, we want to keep going with what we've started. We'd set back what we've done to build soil structure if we tilled," Norby said. "And we've found the extra microbial activity we get with cover crops really helps to break down crop residues."

Norby has seen better water infiltration and soil-structure improvement with cereal rye cover crops, strip-till and no-till. "We don't have trouble with ponding after heavy rains, and we drive on a firm soil. It's firm but not compacted, so we get into our fields as soon as anyone else," he said.

With buffer strips and grassed waterways in place, bioreactors planned and plans for more spoon-feeding of nitrogen, Norby said he feels comfortable with the direction the family is taking. He sees less fall application of anhydrous in his area and said that he has no desire to ever go to a fall N program.

"There's just too much potential to lose it [N]," Norby said. "I'd rather apply liquid N with the planter and then sidedress in one pass, or I may spoon-feed N even more using a high-clearance machine in the future. I want to do as good a job as I can to manage erosion and nitrates on my own before someone tells me how to do it," he said.

Wayne Fredericks, of Osage, Iowa, was the first farmer in the watershed to install a bioreactor. It allowed him to measure nitrates coming from tile water as it entered the bioreactor. Fredericks didn't terminate the rye cover crop in that field until early May, right before planting soybeans.

"Our nitrate levels had been up and down over the past years, averaging 13.5 ppm," he explained. "But by letting the cover crops grow longer, the nitrate count at that bioreactor was down to 4.5 ppm when we looked last June. The bioreactor took the nitrate levels to almost nothing. If we could do this across the Iowa landscape, there wouldn't be a water-quality issue."

Fredericks' long history with no-till and strip-till has also increased his soil organic matter levels by 2.5%.

Rock Creek project coordinator Tracy Church said the project offered farmers an incentive of $20 an acre, up to 200 acres, to use cover crops this year. It offered $10 an acre up to 250 acres for conversion to no-till or strip-till. Incentives for most edge-of-field practices were for 75% of the cost, Church said, but a grant secured by the Iowa Soybean Association will finance 100% of the cost of the 25 bioreactors and saturated buffers called for in the project.

The implementation schedule is for about 20 years, with a gradual increase of practices each year. The plan calls for all cropland to have cover crops and no-till or strip-till by 2038, as well as 25 strategically placed bioreactors or saturated buffers; seven nitrate-removal wetlands; and 3,000 acres of drainage-water management.

The Rock Creek project is an estimated $5.5-million infrastructure investment combined with a yearly operating investment of $1.3 million to achieve all goals identified in the plan. 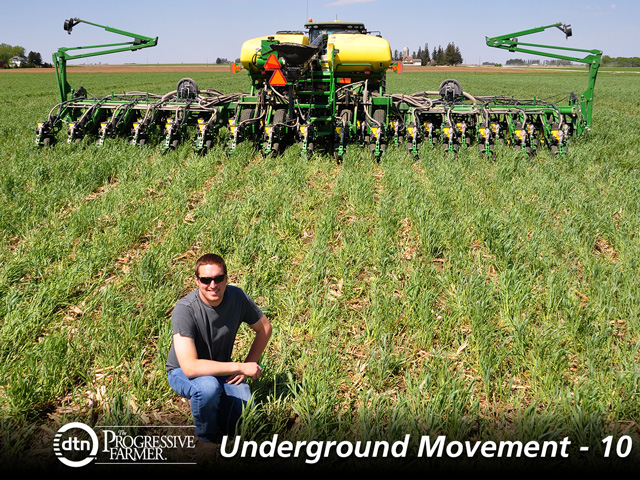