Nick Vinje didn't grow up hearing, "This is how we've always done things." That left the self-described city kid more open to change.

After 16 years of conventional farming, Vinje transitioned to no-till and cover crops in 2013 on most of his 1,700 acres in Gardner, North Dakota, to cut expenses and improve the odds of surviving wet springs.

He watched poorly drained "gumbo clays" evolve into healthy, crumbly soils that support equipment when it's wet and store enough moisture to carry a crop through a dry late summer and fall.

Vinje began farming full-time in 1997 with old machinery and strong financial pressures. With a family to support and no off-farm income, it took some guts to change up farming practices. He dug into research, used tips from other no-tillers and looked to support from the Cass County Natural Resources Conservation Service (NRCS) and Soil Conservation District, and North Dakota State University Extension soil-health specialist Abbey Wick.

In this land of 90-day corn, some say spring comes too late to allow the heavy soils to warm sufficiently to consider no-till. "If you don't make mistakes, you're not pushing yourself hard enough," Vinje said. "Cover your bets by limiting trial size and scope."

As Vinje made the transition from conventional to no-till farming, here are 12 valuable lessons he learned along the way from the land:

"Don't try it for a year or two, and then say it didn't work. You learn so much from mistakes," Vinje stresses.

He has kept one 350-acre crop share field as a conventional-tillage benchmark. The first two years, the conventional field yielded best, but by the third year, the crops planted on no-till ground were equal in yield. In 2016, Vinje's no-tilled fields yielded 44 bushels per acre compared to 38 bpa for conventional. "It's possible the 6-bushel-per-acre boost resulted from the no-till ground having saved enough soil moisture to get through a dry summer," he said.

Vinje joined a North Dakota State University (NDSU) "no-till support group" that brings no-till farmers from the eastern and southern parts of the state together regularly to learn from one another. Meeting monthly through the winter, the group shares technical advice, mentoring and encouragement among roughly 15 farmers.

When unrelenting rain prevented planting on 450 acres in 2013, Vinje seized the learning opportunity to seed cover crops in July and watch them fully mature. He witnessed their value of using moisture, anchoring soil and breaking up heavy clay soils. "If you can walk in your fields after a big, drenching rain, you must be doing something right," he said.

"Chisel plows are not the answer to these wet springs," Vinje said. Eliminating tillage has led to dramatic improvements in soil structure, he noted. Tiling would make life easier on his heavy ground, but it's not in the budget right now and also "isn't a cure-all."

It's tough to wait when neighbors are planting, and you're waiting for soils to warm up and dry out, Vinje admitted. His lesson in patience came with two 80-acre wheat fields -- one conventionally tilled, one no-tilled, planted a week apart because it had rained so much. In the end, they yielded within 0.5 bushels per acre and were able to be harvested the same day.

"No-till doesn't look as nice [as conventional] through the growing season; the wheat is behind in ripening, but they combined the same," Vinje said.

Planting green into standing, mature cover crops as an experimental practice isn't sanctioned by USDA's Risk Management Agency. However, last year, Vinje tried seeding soybeans into still-growing cover crops (wheat/ cereal rye) and liked having a mat of material to run on in the spring. The covers were killed back following planting. NDSU Extension soil-health specialist Abbey Wick recommended "planting green" to provide a reliable green mat to drive on in very wet springs. (See videos of this practice at http://bit.ly/… and http://bit.ly/…)

Vinje doesn't recommend planting green with cereal rye in corn because of allelopathic concerns. He has seen that practice ding his corn yields by 40 bpa.

Vinje was raised by an economics professor and is particular about penciling out crop budgets. He documents new practices using check strips and divided fields.

He admitted his yields aren't always the highest in Cass County, but he strives for profits. Fewer field passes, less machinery and older machinery get him there. Vinje's corn yields generally top out at 160 to 175 bpa and average 120 to 135 bpa, within 5 to 10 bushels of the county average.

His current system saves about $30 per acre in fuel and machinery expense, with two to three fewer passes per year, he said. He uses an older John Deere single-disc 1850 no-till drill. His main tractor, a Cat Challenger 85C, dates back to when he needed 370 hp for conventional tillage, but it's paid for.

Labor savings doesn't necessarily mean time savings. "I spend as much planning time managing my cover crops and no-till as I save from tillage-pass reductions," Vinje said. "Initially, it's a management-intensive way to farm, but it will get easier once there's more research and established routines.

"No-till replaces predictable, consistent routines [tillage] with decisions on individual circumstances," he addded. "With conventional tillage, if you can physically get across a field, you feel like you're making progress."

He also has different weeds, such as dandelions. "Some fields turn yellow in spring. Without tillage, you're left with two or three spring preemerge herbicide options or using 2,4-D in the fall to kill them," he said.

Have something growing constantly has improved Vinje's heavy clays' soil structure and productivity. Root activity and the microbes that live among them build soil aggregates that aerate and drain his soil, and store carbon that feed microbes.

Cover crops fill in between four crops in rotation. This provides these major microbe "food groups":

Fitting in a cover crop after wheat or peas is easy because they come off relatively early. But corn's later harvest poses a timing challenge and "interseeding is a must," Vinje said. He tested a Hagie interseeder mid-July to provide the radish/cereal rye cover crop a jump-start on growth before corn harvest. He plans to build his own.

Vinje also broadcast N-fixing crimson clover (which grows slowly) between his winter wheat crop rows mid-season to establish it by harvest. Before soybeans, he seeds cereal rye or winter wheat to anchor soil during the following April, when wind erosion is rampant in the Northern Plains. After soybeans, he thoroughly eradicates weeds with 2,4-D fall burndown.

It's hard to set one rotation for all fields. "Ideally, my rotation is corn [warm-season grass], then soybeans [warm-season broadleaf], then wheat [cool-season grass], then peas [cool-season broadleaf and legume for N carryover before corn or wheat that follows]," Vinje said. However, each field's harvest timing, seasonal labor demands and uneven market demand for different crops sway decisions.

The reason much of Vinje's land is planted to wheat and soybeans is to avoid having too many peas to sell and too much corn to harvest at one time. If wheat harvest comes early enough, that allows time to establish a more diverse cover-crop mix. If not, he follows it with winter wheat or cereal rye, which will establish reliably before winter and not cost very much.

Small grains present a late-summer opportunity to seed cover-crop cocktails, which help to control weeds, anchor soil and nutrients, and diversify soil-microbe food sources and rooting depth and life spans. Buckwheat was a great addition for attracting pollinators and beneficial insects, and is a P scavenger, but the cash market for buckwheat is flooded for now, he said.

No-till helps to manage weather risk through improved soil-moisture management. "But it will never be cut and dried like conventional farming," Vinje said. "You're constantly adapting to individual weather and field circumstances. The logistics and details can be time-consuming but fascinating.

"I personally love the challenges that no-till and cover crops provide. It has brought back the fun and enjoyment that I experienced when I first started farming." 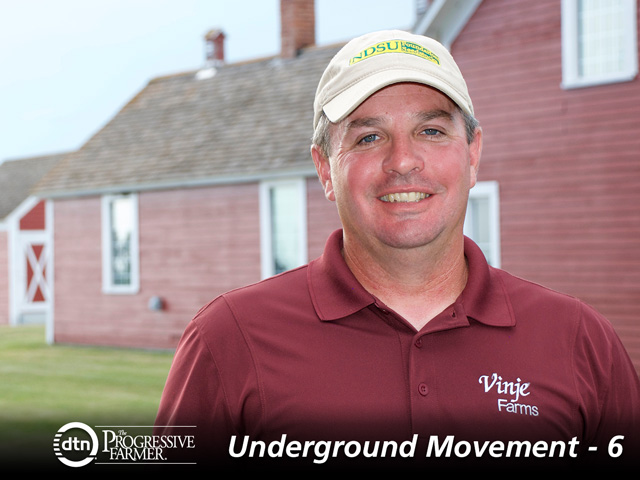