"Cover crops are your first step to freedom!"

Ray Archuleta makes this declaration all the time and believes it. A 33-year employee for USDA's Natural Resources Conservation Service (NRCS), Archuleta is one of the agency's leaders in emphasizing soil health. His message: Many modern farming practices are hurting the soil and farmers' pocketbooks.

"Our farmers are running on ancient carbon, and it's how we're growing broke," he says, pointing to the reliance on fossil fuels. "We want our farms to run on new sunlight."

Archuleta seeks a farming system built more on ecology and less on the reliance of chemical fertilizers and pesticides. Such farming emphasizes more diversity while limiting the biological, chemical and mechanical disturbances of the soil.

"All of these tools that we have -- fertilizers, tillage, herbicides, pesticides -- all have unintended consequences," Archuleta explains. "But you cannot become economically resilient until you become ecologically resilient."

ON A SOAP BOX

With lectures and demonstrations that border on fervor, Archuleta is on a quest to change agriculture by changing the way farmers, agronomists and federal programs treat the soil. Archuleta calls on farmers to embrace "bio-mimicry" -- how to mimic nature when they farm. Doing so, he argues, will reduce some of the stress producers face now to cash-flow their inputs. He argues that farmers who adopt no-till production with a multispecies cover-crop mix can improve the biology and nutrients in their soil to the point they will reduce their fertilizer and pesticide applications.

NRCS officially rolled out its soil-health campaign, "Unlock the Secrets of the Soil," in 2012. Archuleta feels the campaign had been a long time coming. The conservationist started questioning NRCS tactics in the early 2000s. At the time, he was working in Oregon and Idaho, and witnessed sediment turning the ordinarily emerald Snake River the color of chocolate despite millions of dollars being poured into conservation practices. Seeing farmers forced to sell their land left him questioning practices that depended heavily on tillage, irrigation and inputs.

Archuleta believes the soil-health movement began in Burleigh County, North Dakota, (Bismarck) where several farmers and ranchers began diversifying their rotations with multi-cover-crop mixes and grazing. Some of those farmers had caught presentations from cover-crop champions such as Brazil's Ademir Calegari at events such as No-Till on the Plains.

Gabe Brown, who farms near Bismarck, embraced the concepts early and has mentored many other growers. Brown says people "get an earful" when they are around Archuleta.

"That's one of the things that endears me to Ray is he is one of the few government employees who tells it like it is," Brown says. "Ray has caught a lot of static from that."

Archuleta's superiors at USDA headquarters have heard complaints in the past from lobbying groups that don't want to hear an NRCS staffer talk about farm practices that reduce inputs such as fertilizer or other chemicals. Yet, Archuleta is in such demand that NRCS can't exactly keep him tucked away in a basement office somewhere, Brown says.

While he once might have been considered on the fringe of a movement, Archuleta is now viewed as someone who got the cover-crops movement where it is today. Even he marvels at the transformation that has led to hundreds of thousands of acres of cover crops, for example. Workshops and field days have helped drive the adoption, he says.

During these events, Archuleta often demonstrates the way soils respond to water under tilled and no-till systems. The demonstrations show how water is absorbed and how soils and nutrients are lost with heavily tilled soils.

"We're selling concepts of soil health," Archuleta says. "I want them [farmers] to see so they can never forget."

He often preaches that the job of a NRCS conservationist is not just to ensure farmers have a conservation plan on their operation. The traditional mind-set is to focus largely on USDA programs and farm bill mandates, he says.

He'll also pull out recent photos of dust storms on the Plains and in western states, and compare them to the Dust Bowl era. "Can you see the conservation plans blowing? Can you see all the programs and billions of dollars blowing? Isn't that amazing?" he asks.

As Archuleta explains, no-till farming stops the destruction of the soil, while cover crops feed the factory workers in the soil, which range from microbes to fungi to insects and worms that build the soil.

Archuleta, though, is ready for a change. He has plans to retire this coming June and form a soil-health consulting business in partnership with Brown and Ohio farmer Dave Brandt. He believes he might be able to reach more innovative farmers by working in the private sector, though he also says he thinks NRCS will continue to carry the torch for soil-health practices after he's gone. 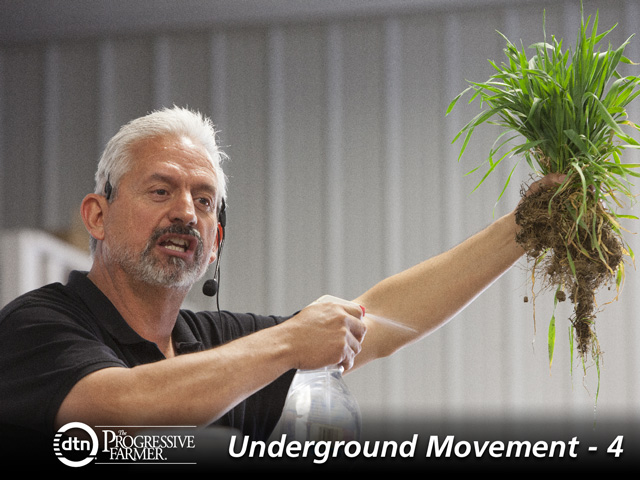