OMAHA (DTN) -- With tight crop margins and increasing yields, it's easy to overlook the importance of potassium (K) applications.

Soils deficient in K will limit yields and quality. Farmers can face several different issues with how much of an investment they make with nutrient applications.

Each state may have its own recommendations of optimum potash levels based on each state's different soil types, so knowing the K levels for your soils would be the first place to start.

"I know farmers soil sample, including using precision sampling, but maybe they only do this every four or five years," McGrath told DTN. "Fields in that optimum to slightly below [range] need to be monitored more closely."

Despite the general knowledge of the importance of keeping nutrient levels in optimal ranges, a 2016 study from DuPont Pioneer shows managing both phosphorus (P) and K levels remains an issue. In the study, 22,000 soil samples across 12 Corn Belt states showed P/K levels were deficient in a "significant" number of tested fields.

The study shows that P/K deficiencies can affect both yield potential and grain quality so developing a fertility management plan is important.

"Growers often think of nitrogen management when they consider soil fertility decisions, because of its important influence on corn production," Andy Heggenstaller, DuPont Pioneer agronomy research manager, said in a press release. "However, deficiencies in P and K can inhibit yields over the long term in both corn and soybeans, limiting profit potential over time."

The study also pointed out that negative balances of P and K may be further exacerbated by the higher nutrient requirement of today's more productive hybrids and varieties. Many states have modified recommendations in recent years, and growers need to make sure their programs are keeping up with these changes, according to DuPont Pioneer.

McGrath said this indeed has been an issue in his region. The higher yield removed from the field need more nutrients to replenish soil levels of P and K.

Heggenstaller said phosphorus deficiency can cause issues with early root and shoot growth and can reduce tolerance to drought, disease and temperature stresses. Potassium is vital for water regulation and enzyme activation, and it also promotes stalk strength and late-season standability.

"There are many things growers can do to ensure that their crops are getting enough P and K each season," he said. "We encourage growers to make sure they conduct soil testing at the right frequency and use the most current soil fertility standards."

McGrath said applying both P and K are long-term investments for producers, but their own particular operation's situation might make this nutrient investment more difficult. For those who rent the majority of their acres, the consideration of building nutrient levels in the soil only to lose the rented land has to be part of the investment decision.

For these farmers, they need to find a "sweet spot," balancing applying K on rented land, he said.

"I hear this a lot when I have meetings," McGrath said. "I understand their hesitation (to invest), but there are other things that can be done like educating the landowner and maybe even things like flex leases so the landowner can be rewarded."

SOME APPLY K, SOME DON'T

Differences in K applications are apparent across the Corn Belt.

Michael Cline, a New Ross, Indiana, corn and soybean producer applies K annually to his soils. He has rotated more soybean acres into his central Indiana operation in recent years. During fall of 2015, he did soil tests and they showed his fields were deficient in K.

"Since having gone back to a corn-bean rotation we have opted to spread potash in front of our bean ground and DAP/MAP in front of our corn ground so that we can also spread urea in front of the planter easily," Cline said."

That puts the respective fertilizer ahead of the crop with the highest removal rate for that nutrient. His application rates also are set to build up some K levels on his poorer testing clay/silt loam soils.

This application schedule also spreads out the fieldwork load. Cline said he picks up his own fertilizer so fewer trucks are needed at one time.

At the western end of the Corn Belt, K levels in soils are rarely even an issue and applications are fairly limited.

Ryan Overleese, an agronomist from Kearney, Nebraska, said his clients don't apply much K as the majority of the fertile Platte River valley soils are plentiful in K. Many soils in the region have 400 to 600 parts per million (ppm) of K, he said.

"We must keep in mind that these high numbers don't always mean that much is available to the plants in-season," Overleese said. "There will always be a portion that the roots cannot extract."

Overleese said some area growers have begun doing trials, applying potassium thiosulfate on soybeans through the pivot, and they are seeing some good results. He's still learning about the in-season availability of this nutrient with changing soil temperature, moisture and tillage systems, he said. 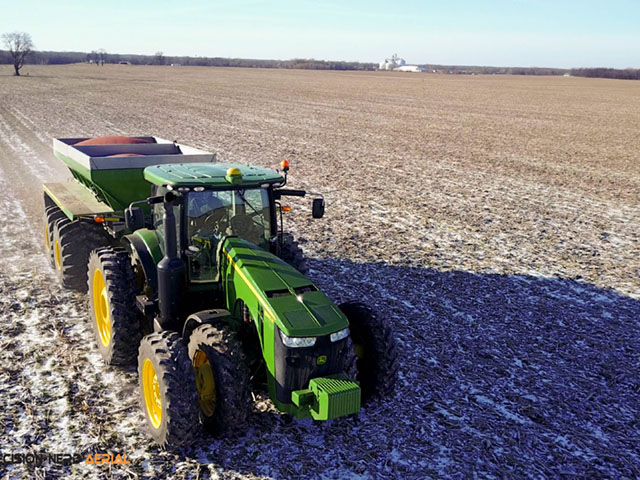