DECATUR, Ill. (DTN) -- Farmers clamoring for a dicamba formulation to use in soybean and cotton crops genetically engineered to tolerate the herbicide finally have their wish. The Environmental Protection Agency (EPA) announced Wednesday that it is registering Monsanto's herbicide known as XtendiMax with VaporGrip Technology for the 2017 season. However, the registration comes with important spray requirements.

It is a two-year conditional registration that would allow the agency to let the label expire or easily make necessary changes if problems with resistant weeds or pesticide drift are detected. In the release, EPA acknowledged that this formulation is different than the dicamba products that were allegedly used illegally and caused damage to sensitive crops in 2015 and 2016. The agency also indicated it continues to investigate the dicamba drift issues that occurred this season. Read more at http://bit.ly/….

The label also comes with a lengthy list of drift mitigation measures that includes no tank mixing and the use of a specific spray nozzle (Tee Jet TTI11004 nozzle with a maximum operating pressure of 63 psi); buffer zones to protect sensitive areas when the wind is blowing; no application from aircraft; no application when the wind speed is over 15 mph or below 3 mph; and boom height restrictions of no more than 24 inches above the crop canopy are some of the other requirements.

University of Illinois weed scientist Aaron Hager told DTN that his biggest concern is that spray applicators understand that herbicide volatility and physical drift are different. "The need to carefully follow label directions and keep this product physically on-target will be critical and require a lot of attention to detail both during application and clean out of sprayers," Hager said.

"It doesn't take much of dicamba to cause damage to sensitive crops and we have a lot of sensitive crops to consider. Having a reduced-volatility formulation does not eliminate physical drift," he added.

XtendiMax herbicide is a diglycolamine (DGA) salt -- the same salt used in Clarity herbicide. Monsanto has told DTN in past correspondence that it is the VaporGrip additive that prevents the formation of dicamba acid and lowers volatility, based on company tests. However, university weed scientists have complained that they've not been allowed to test the new formulations to compare to older products such as Banvel and Clarity.

DuPont has signed a supply agreement with Monsanto for a DGA-based dicamba plus VaporGrip called FeXapan. BASF is also awaiting registration of a dicamba herbicide to be used in-crop with Xtend crops. Branded Engenia, it is a BAPMA salt with a molecular structure said to be more effective at binding dicamba spray to plants and soil, reducing potential volatilization of the herbicide. BASF representatives told DTN they expect Engenia registration within weeks and in time for the 2017 season.

However, some states are considering more stringent protocols. Proposals currently under review in Arkansas, for example, would prohibit dicamba sprays between April 15 and Sept. 15.

Monsanto has said it expects the seed technology will be deployed on 15 million soybean acres and 3 million cotton acres in its seed brands in 2017. The technology has also been licensed to more than 100 additional brands. DuPont Pioneer does not reveal acreage figures, but did an introductory launch of about 30 Roundup Ready 2 Xtend soybeans varieties across a broad range of maturities this year and expects to ramp that up in 2017. In addition, Syngenta will release Xtend soybean varieties in 2017 for the first time.

Canadian farmers already have access to the Xtend trait and herbicide platform for 2017. Farmers in Canada held off planting the trait in 2016, except for experimental plots, because it lacked EU import approvals at planting time. The Xtend trait now has the international approvals needed for launch.

EPA proposed this dicamba herbicide decision on March 31, 2016. EPA's final regulatory decision and supporting documents, including a response to public comments, are available in docket number EPA-HQ-OPP-2016-0187 at www.regulations.gov.

Other spray requirements for XtendiMax include:

-- Do not make an application of the product if rain is expected in the next 24 hours.

-- No tank mixes have been approved at this time for use with this product.

-- The maximum combined quantity of this product that may be applied for all preplant, at-planting, and preemergence applications is 44 fluid ounces (1.0 lb. a.e. dicamba) per acre per season for both cotton and soybeans.

-- The maximum application rate for a single, preplant, at-planting, or preemergence application must not exceed 44 fluid ounces (1.0 lb. a.e. dicamba) per acre for both cotton and soybeans.

-- The combined total application rate from crop emergence up to R1 must not exceed 44 fluid ounces (1.0 lb. a.e. dicamba) per acre for soybeans per year.

-- The combined total application rate from crop emergence up to seven days' pre-harvest must not exceed 88 fluid ounce (2.0 lb. a.e dicamba) per acre for cotton per year.

-- All applications for both cotton and soybeans must not exceed 88 fluid ounces (2.0 lb a.e dicamba) per acre per year. 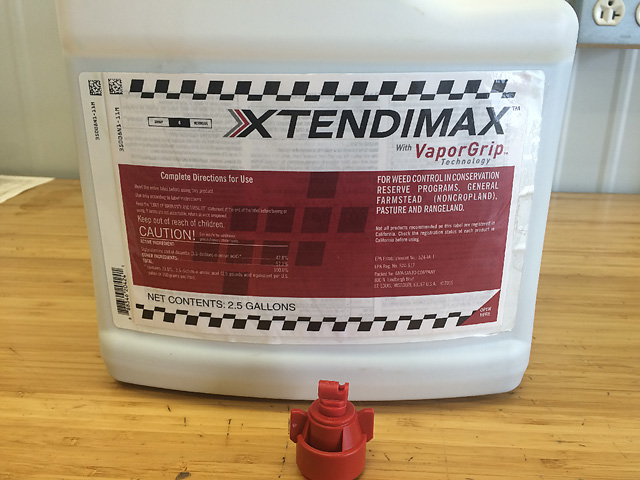