OMAHA (DTN) -- Retail fertilizer prices continued to move lower during the first week of October 2016, continuing the recent trend, according to retailers surveyed by DTN. All eight of the major fertilizers are lower compared to last month with only two fertilizers down a substantial amount.

Leading the way lower for the first time is anhydrous. The nitrogen fertilizer is 6% lower compared to a month earlier and has an average price of $472/ton.

The other fertilizer significantly lower is 10-34-0. The starter fertilizer is 5% less expensive from the first week of September and now has an average price of $454/ton.

The trends over the last few years show most retail fertilizer prices peaked in 2010 to 2012 and since mid-2013, prices have settled lower, he wrote.

"In fewer than two years of data, anhydrous ammonia prices went from $725 per ton in early 2015 to nearly $500 per tons recently," Widmar wrote. "And while many expected lower fertilizer prices, the magnitude of the decline, more than a 31% decrease, is more than many likely expected."

"While prices are currently lower than earlier this year, it will be important to monitor demand for fertilizer -- especially the intended size of the 2017 U.S. corn acreage," he wrote. "Commodity prices, fertilizer prices and crop acreages will all be important factors to watch over the winter." 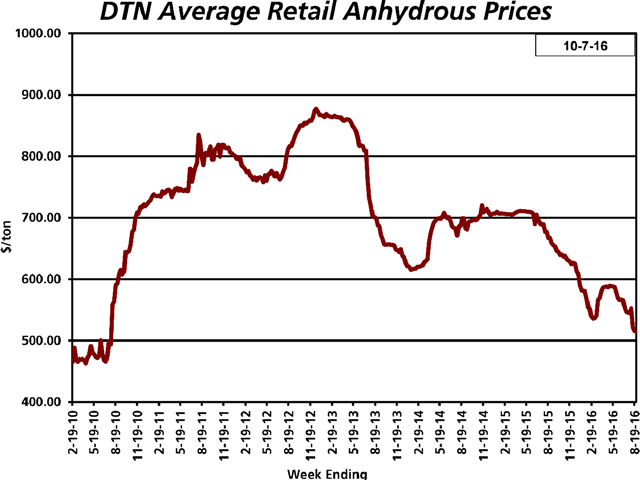