OMAHA (DTN) -- Average retail prices for fertilizers continued to move lower the last week of June 2016, according to fertilizer retailers surveyed by DTN. This marks three weeks in a row fertilizer prices have been notably lower.

China's potash inventory is expected to remain high for the rest of 2016, which will decrease imports and depress the global potash price, according to a Dow Jones article. China is the largest potash consumer in the world with 27% of the global demand, which means changes in Chinese imports would have an effect on global potash prices.

China's imports of potash declined by 10% year-on-year (yoy) to 3.0 million metric tons (mmt) in the first five months of 2016 with total import value dropping 17%. The average import price is at a historical low.

Fitch Ratings told Dow Jones it believes the high inventory is primarily associated with weaker domestic demand, rising domestic output and aggressive imports in previous years. China imported 8 mmt of potash in 2014 and 9.4 mmt in 2015, which represented growth of 33% yoy and 17% yoy.

In addition, China's domestic potash output in 2015 rose by 8.6% yoy to around 9.5 mmt. Fitch said they expect China's domestic production to remain high as the Chinese government has a target of achieving 70% self-sufficiency in potash fertilizer production by 2020, compared to 60% now, Dow Jones reported.

Retail fertilizer charts dating back to November 2008 are available in the DTN fertilizer segment. The weekly charts are cost of N/lb., DAP, MAP, potash, urea, 10-34-0, anhydrous, UAN28 and UAN32. 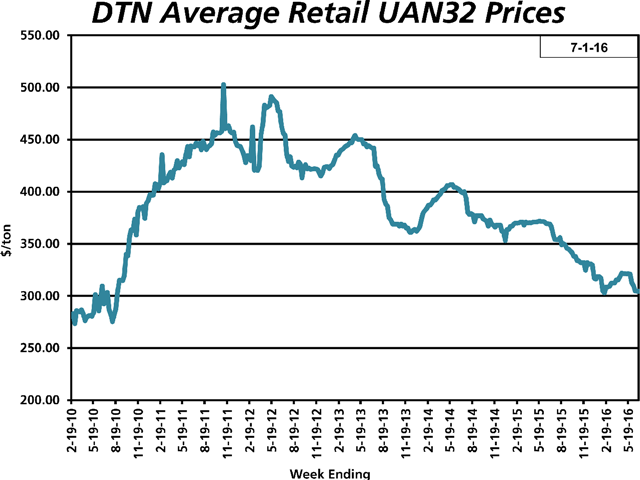