When I was a kid, my parents would usually take me and my two younger sisters for a drive in the country north of where we lived. There was a family who decorated nearly everything on their farm with Christmas lights, including buildings, fences, and even machinery.

I always thought that was so impressive. Fast forward to my high school years (now over 30 years ago) and I decided we should try this. We lived along Nebraska State Highway 31 northwest of Omaha, so there would be a built-in audience.

So MANY strands of Christmas lights were purchased. Our little white farmhouse sat closest to the highway, so we always put lights on it.

We had a chain-link fence around the yard, so I put Christmas lights on it one year. Someone told me if the lights shorted out on the metal fence this would make it electrified.

I was a dumb high school high school kid, and I did it anyway. If anything, it would work as a reverse electric fence keeping the cattle out of the yard.

For many years we put up a metal-framed star on the west side of our barn with Christmas lights wrapped around it. We put it up pretty high, so it was clearly visible from the highway.

As if this wasn't enough, my dad and I parked a tractor in the front yard several years with an old wooden wheeled wagon and put lights on these. My mom found lights that blink in a certain direction and so I put them on the wheels to make it appear the tractor and wagon were moving.

I know one year we used my grandpa's 1935 John Deere D which was parked in the trees and did not run at the time. Then I used our 1957 John Deere 620 another year because it ran.

We only had three tractors back then, so I don't think my dad was very excited about tying up one of his tractors for a good month plus. Still, it was late November into December; it wasn't like it had to miss any fieldwork.

It was a major challenge keeping all the various motion lights and regular lights on and working correctly. I spend many hours outside in the cold Nebraska winter replacing bulbs and even whole strands.

The Omaha World-Herald newspaper would list the addresses of big Christmas light displays in the Sunday paper right after Thanksgiving. You had to send them your address and they must have sent someone by to look at the displays, then they published a select group. We got listed a couple different years in the outside of Omaha listing.

We had a lot of cars driving by our place slowly during this time of year. Once in a while they would even stop at the end of the lane, get out and take some photos. People really seemed to enjoy the lights, which was nice to see.

The light display continued during my first couple of years of college as I attended a local community college while I was living at home. I then transferred my credits to the University of Nebraska-Lincoln (UNL), so I lived in Lincoln most of the time.

This was really the end of our full farm Christmas display. My dad would put lights on the house and the star was still on the barn, but the tractor and wagon never got decorated again.

When I first moved to the farm where we live now, almost 20 years ago, I thought about trying to replicate our farm Christmas light display. The real-life challenges of working full-time and farming on the side with livestock got in the way, and I just didn't have much time to do this.

Plus, we were also six miles to the closest town, on a gravel road and we have a quarter-mile lane -- very few people would even be able to see it.

After my wife and I had our three children, I took some of the old lights (we never throw anything away) and put up a few strands on the front of our house. The kids always enjoyed it, which certainly made it worth it.

About a mile and a half south of us is another farm-place and they put up a few Christmas lights. Small world -- this place is owned by the same couple who used to have the grand display we would visit when I was kid.

They sold their former farm-place further south and moved the roughly 20-some-odd miles northwest a few years ago. I stopped one time after they moved in and told them how much I enjoyed their Christmas light display at their previous farm-place when I was kid.

I would certainly agree with this statement. I hope you and yours have a Merry Christmas and a Happy New Year! 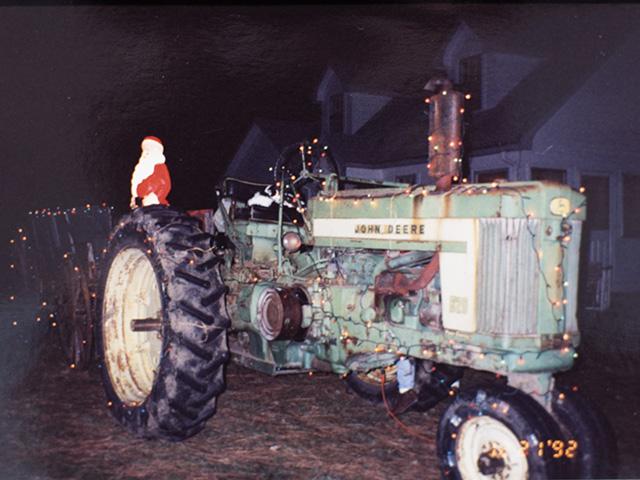