Unfortunately, my whole family now knows all this. My mother, Ellen Quinn, passed away Jan. 29 from vascular dementia/Alzheimer's disease at the age of 77.

My mom was a reluctant farm wife, growing up in South Omaha. She would drive us from field to field in the spring if needed, but she never once drove a tractor and certainly didn't ever help us work cattle.

She was a reliable wife and mother in the early years and then added the title of grandmother in later years. As my dad would say, she definitely wore the pants of the family as she ran a tight household while my dad farmed and worked off the farm all those years.

Dementia/Alzheimer's has a profound effect both on the brain and the body, and my mom was certainly no different. The last several years were tough as we all were experiencing "the long goodbye" from her every day.

I can't type any words that can describe how terrible it was to see her in this condition, especially during the last few weeks, the woman who gave birth to me. We all wanted it to be over and for her not to suffer anymore -- but when the end was near, we all wanted more time with her.

I guess this is probably a fairly common feeling. You try to be ready for a complete, overwhelming sadness, but I'm not sure anyone is ever fully prepared for this -- even knowing this was going to be the final outcome for several years now.

The day before she passed away, I began to write my mom's obituary as we knew the end was close. Surprisingly enough, for some reason, it was fairly easy for me to write.

The following is some of what I managed to write, even though I'm sure she would have not been very happy her life story was this long. Sorry, Mom.

Ellen Catherine Burke was born Oct. 4, 1944, in Omaha, Nebraska, to her parents, Charles Patrick Burke and Genevieve Irene (O'Hern) Burke. She joined her older sister, Rosemary, in the same South Omaha home that her paternal grandparents lived in.

She attended St. Mary's Catholic grade school and then attended and graduated from Archbishop Ryan High School in 1962. She wanted to go to Omaha South High School like her father, her sister, and many of her friends, but her parents insisted on sending her to the recently opened Catholic high school in South Omaha.

After graduating from high school and taking a short business course, Ellen joined the workforce, working in a few different offices, including Central National Insurance Company and Physicians Mutual in Omaha. It was there she met several women who would become her lifelong friends.

She married Gary Echtenkamp on Oct. 22, 1966, at St. Mary's Catholic Church in South Omaha. They made their home in Elkhorn, Nebraska.

Gary passed away on Sept. 28, 1970, from Hodgkin's Disease. Ellen continued to live in the house on Mary St. in Elkhorn after his death.

A young Elkhorn-area farmer, Roger Quinn, inquired about purchasing Gary's car, a 1966 Ford Galaxy 500. The car had a manual transmission, which Ellen could not drive. Roger bought the car and then later asked Ellen for a date. They married on Jan. 6, 1973, at St. Patrick's Catholic Church in Elkhorn.

And she got the Ford back again, which she could not drive.

The couple was blessed with the births of their first child, son Russell in 1974, followed by daughters Kolleen in 1977, and Maureen in 1979.

Ellen owned an in-home daycare beginning in 1981. She operated Ellen's Daycare for 35 years and cared for literally hundreds of children all over the area.

Ellen was extremely proud of Irish ancestry. She was 100% Irish and decorated her home with various Irish items. Roger and Ellen even took a trip to Ireland in 2005.

She bowled on Monday evenings in a women's league in Elkhorn for several decades with another group of women who would also become her lifelong friends. Ellen was also a wonderful baker -- people often requested her famous chocolate chip cookies. She also loved taking care of a back deck full of plants and flowers.

She was active in her church of St. Patrick's. She baked goodies for the popular Bingo nights many years ago and more recently sang in the church choir.

Ellen insisted the family always attend Mass -- it didn't matter where they were. Even on vacations, a Catholic Church had to be found.

In later years, she enjoyed attending her grandchildren's various events. While vision and cognitive issues slowed her down, she did still enjoy spending time with family and friends.

Ellen passed away Jan. 29, 2022, in Omaha after battling Alzheimer's disease and vascular dementia.

She was preceded in death by her first husband, parents, and sister. She is survived by husband, Roger, of Elkhorn; son Russ (Tracie) of rural Herman; daughter Kolleen (Nick) Benjamin of Omaha, and daughter Maureen of Omaha. She is also survived by five grandchildren (Kyle, Burke and Ella Quinn; Quinn and Brock Benjamin), brothers-in-laws, sisters-in-laws, nieces, nephews, cousins and many friends.

She will be profoundly missed by her family and friends.

The Irish Blessing was included in her funeral program. It reads:

"May the road rise up

May the wind be always

May the sun shine warm

May the rain fall soft

And until we meet again,

May God hold you in the

palm of His Hand."

Thank you, dear readers, for your attention even though this wasn't about Vintage Iron. Like I said, Mom wasn't a hands-on farm wife, but she was a hands-on wife, mother and grandmother and always encouraged all my interests, including vintage iron and my own desire to farm.

She will be missed. 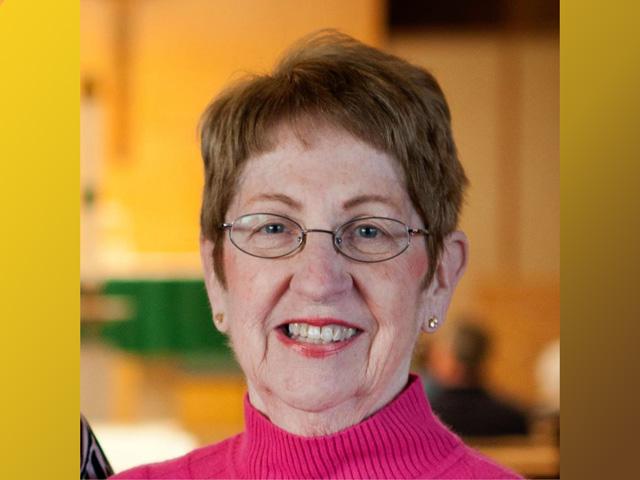