Early this month, I received an email from someone I correspond with occasionally. Howard Myers, a farmer from Lawrenceville, New Jersey, sent me a photo of the cover of the June 1967 edition of The Progressive Farmer magazine.

The words "Double Cropping Increases Profits Without Adding Acreage" were on the cover. The photo showed seven combines harvesting wheat, two semi-trucks and grain trailers loaded with wheat, 15 mostly International tractors preparing or planting a second crop and a white pickup truck with two gentlemen who appeared to supervise this entire operation.

Here was what Howard said about the PF cover:

"Not only has The Progressive Farmer changed in size, shape and price (25 cents at the time), the cover photo shows how much farming and farm equipment has changed. Look at how much manpower is involved in running all that equipment."

It is a fascinating photo to examine just because of the sheer number of people involved in harvesting the wheat and planting a second crop, whatever crop that would be. I counted 23 people if every tractor and semi-truck had an operator, not including the two guys standing by the white pickup.

I don't have much personal experience with double cropping, but I'm going to go out on a limb and say it doesn't take 23 people to harvest wheat and plant a second crop today as it seemed to have taken 53 years ago. That PF cover photo is truly a window into the past.

Thanks, Howard, for sending this interesting photo!

Over the years in this space, I have written quite a bit about my own family's experience with vintage iron on our farm in eastern Nebraska. We still have two tractors (a 1935 John Deere D and a 1957 620), which were owned by my grandpa John "Jack" Quinn.

On the Fourth of July this year, it will be 40 years that he has been gone. While I was just a brokenhearted little 6-year-old at the time, that day is forever etched in my memory.

We lived in the same town as my paternal grandparents, so I would see them quite often when I was young. My maternal grandpa passed away when I was just a year old, so I don't remember him at all. So, for the first six years of my life, my one grandpa was all I had.

Grandpa Quinn spent his whole life in the same town where he was born, and farmed the same land. He milked many cows and raised seven children.

He was a retired farmer by the time I came along, complete with his bib overalls. He didn't wear them to church, but he did wear them pretty much the rest of the time.

I don't remember this, but my parents told me years later when we went to the funeral home for his visitation that night, nearly 40 years ago now, the very first words out of my mouth were: "Hey! Why isn't grandpa wearing his overalls?"

I only have a few select memories of him.

I remember he picked me up from kindergarten one day and took me back to their house. I believe this was when my youngest sister was born in September 1979. I recall he came out to the farm one day when my dad and I were there, and they assembled a metal round-bale feeder for the cows. I can remember sitting in lawn chairs in their back yard after they moved to town.

And that is about it. I do wish I would have had more than six years with him, but obviously we do not control things like this.

There is a farm family in our area whose husband/dad/grandpa recently passed away unexpectedly. It is a pretty sad deal.

One grandson is about the same age as I was when my grandpa died. This struck me as I saw him at the funeral home at the visitation earlier this month.

Almost exactly 40 years earlier, this little boy was me.

I didn't get to talk to him, but you could see from across the room even for an 8-year-old he understood what was happening. I don't know if I would have had any great words of wisdom for him. But I think I should have told him it's hard to understand this right now, but he will be with you forever.

He will be there as you grow up and chose your path in life, both in terms of a personal life and a professional one.

There were no seven kids for me, but three were plenty (which I'm sure my wife appreciates). Maybe since I grew up idolizing my grandpa, the only thing I ever wanted to be as a kid was to become a farmer and live on a farm (we lived in town part of my childhood).

I achieved these goals. And I think he would have also been proud I became a long-time agricultural journalist.

My dad told me that, when it would rain when he was a child, my grandpa would often be found sitting in the enclosed porch of their old farmhouse and just watch it rain. During the evening of the Fourth of July 1980, while watching the neighbor kids light off their fireworks, a quick-moving summer storm came through.

We all had to retreat into the house to watch the rain fall. 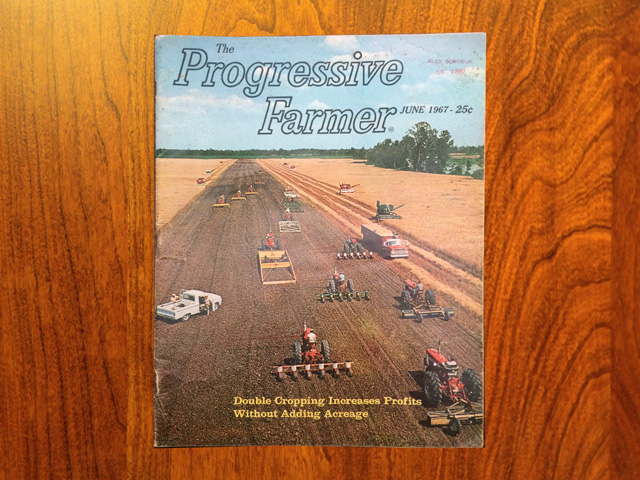