The American Society of Civil Engineers (ASCE) unveiled their 2021 Report Card for America's Infrastructure on Wednesday, March 3. The nation earned a C-, up from 2017's cumulative GPA of D+. This is the first time since ASCE began issuing the report card that the nation's infrastructure has received a GPA outside of the D range.

Between 2017 and 2021, five category grades increased, while only one -- bridges -- decreased. This, combined with state and local governments' commitment to improving infrastructure, indicates that infrastructure investment in the United State is trending upward, said ASCE in their report.

As for the nation's inland waterways, ASCE gave it a grade of D+, a slight increase from 2017's D grade and 2013's D-, one of the lowest grades for all sectors that year. "2021's higher grade reflects the reversal of chronic under-investment in the inland waterways, more purposeful and efficient planning by the U.S. Army Corps of Engineers, the 2014 increase in the diesel fuel tax, and higher operations & maintenance funding that has resulted in a reduction of unscheduled lock outages," said ASCE.

Most recent funding for the waterways came via the Water Resources Development Act (WRDA) of 2020, which included a priority for the agricultural and barge industry by adjusting the cost share for lock and dam construction and major rehabilitation projects along the nation's river system. The cost share for such projects went from 50% federal government and 50% Inland Waterways Trust Fund to 65% federal government and 35% Inland Waterways Trust Fund with the passage of WRDA 2020. This cost-share adjustment applies to projects that have construction starts between fiscal year 2021 and 2031.

The Inland Waterways Trust Fund was established to help underwrite the costs of construction and major rehabilitation of the nation's inland waterway system. Mike Steenhoek, executive director of the Soy Transportation Coalition Fund said, "Funds are generated via the Inland Waterways Tax, a 29-cent-per-gallon assessment on diesel fuel used on 27 stretches of the country's inland waterway system. The 12,000 miles of fuel-taxed waters include most of the nation's largest rivers: the Mississippi, Ohio, Illinois, the lower Missouri, and the Gulf and Atlantic Intracoastal waterways."

The Mississippi River system is America's primary inland waterway system. It comprises the Mississippi, Arkansas, Illinois, Ohio and Tennessee rivers and the Gulf Intracoastal Waterway. "This extensive waterway system feeds exports from grain elevators from Baton Rouge through New Orleans, to Myrtle Grove, Louisiana. This region handles 57% of U.S. corn exports in volume (valued at $4.8 billion) and 59% of U.S. soybean exports ($12.4 billion), as well as 55% of soybean meal exports and 72% of distiller's dried grains exports," said USDA in an August 2019 study.

That USDA study noted that, without "consistent, predictable funding, the grain and soybean export draw area around the waterways system could shrink from an average of 150 miles, currently, to as little as 75 miles under a constrained scenario, as the cost to ship on the river increases." For corn, delays on the Mississippi River could have up to a 24-cent-per-bushel impact, while the impact to soybeans could be up to 25 cents per bushel.

Major winter maintenance occurs about every 20 years and includes concrete repairs, sandblasting and repainting the miter gates and updating the bubbler system used to prevent ice buildup within the lock chamber, said the USACE St. Paul District. The $4.5 million winter maintenance project at Lock and Dam 4 is scheduled to be completed mid-March, ahead of the 2021 navigation season.

While most of the work has been performed during the day, the facility is an active work site 24 hours a day, as sandblasting has been conducted overnight. This construction method allows for the painters to follow during daylight hours and ensures the maintenance stays on schedule to reopen the lock on time, noted the USACE.

The St. Paul District maintains 13 locks and dams from Minneapolis to Guttenberg, Iowa, and manages 243.6 miles of the Mississippi River's 9-foot navigation channel. "Keeping this system open is vital to the nation's economy," said the USACE. "The commercial navigation industry transported 10 million tons of commodities through Lock 4 during the 2020 navigation season. The industries making these shipments within the St. Paul District saved nearly $400 million by using the inland waterways instead of overland shipping methods."

In the Rock Island District, the largest and most noticeable project that took place over the winter was at Lock and Dam 14, LeClaire, Iowa, which was dewatered in mid-January with work continuing until mid-March. "The site has not been dewatered in over 20 years," said Aaron Dunlop, operations manager for the Mississippi River Project Office. "This dewatering will allow for critical inspections and much-needed repairs."

There were other lock and dam projects over the winter in both the St. Paul and Rock Island Districts, which is the best time to do maintenance and repairs given there is no barge traffic. "We do this during the winter to ensure we don't negatively impact navigation," said Joe Schroetter, project manager at Lock and Dam 4. "The maintenance work ensures the lock will continue to deliver economic savings to agricultural producers and shippers across the Upper Midwest well into the future."

Here is a link to the entire ASCE 2021 report card: https://infrastructurereportcard.org/…. 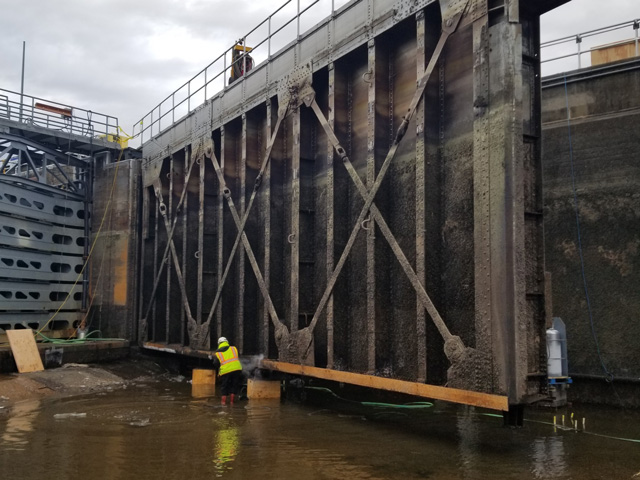