At midnight, May 2, the Mississippi River in St. Louis, Missouri, was closed as levels rose to 38 feet, close to major flood stage of 40 feet. The closure by the U.S. Coast Guard effectively has stopped all traffic from mile marker 179 to 184. The Coast Guard said it would lift the restrictions "as soon as conditions improve." The river there is expected to crest at 41.27 feet on May 6 and start the slow descent to below 38 feet on May 9 or May 10.

Upriver from St. Louis, there are still 11 locks closed between Lock and Dam (L&D) 12 and L&D 22. In my blog titled "Second Crest Recorded for Mississippi River in St. Paul, Minnesota," posted on April 29, I wrote that when there are lock closures, the U.S. Army Corps of Engineers (USACE) St. Paul District operates the river in an "open river" state. This means that the dam gates are removed from the water and the river is acting as it would without the lock and dam system in place.

Here is a link to the blog:

Heavy rains over the Illinois River have also impacted barge traffic headed to and from Chicago, with very limited to no barge movements from mile markers (MM) 231 to 291 because of lock closures. The areas restricted begin at Starved Rock L&D at North Utica, Illinois, through to Lockport L&D, Lockport, Illinois. In addition, if any barges make it off the Illinois River, they will be unable to enter St. Louis due to the closure there.

In a May 5 update on the 2019 flood, the USACE St. Louis District said that Upper Mississippi River L&D 24 in Clarksville, Missouri, and L&D 25 Winfield, Missouri, remained closed. L&D 27, also known as the Chain of Rocks Locks on the southern end of Chouteau Island near Granite City, Illinois, across the river from St. Louis, along with Melvin Price L&D (about 17 miles north of Saint Louis, Missouri,) also remained closed until further notice due to high water.

Because of the flooding on the Illinois River and the closure of the Mississippi River at St. Louis, the Chicago Board of Trade sent a press release on May 2 stating:

"Effective immediately and until further notice, pursuant to The Board of Trade of the City of Chicago, Inc. ("CBOT" or "Exchange") Rules 701. ("Declarations of Force Majeure") and 703.C.G.(8) ("Barge Load-Out Procedures for Corn, Soybeans, and SRW Wheat..."), CBOT is hereby declaring a condition of Force Majeure due to load-out impossibility at a majority of corn and soybean regular shipping stations on the Illinois and Mississippi rivers. Such shipping stations are unable to load due to high water levels and/or flooding."

A force majeure clause is a contract provision that relieves the parties from performing their contractual obligations when certain circumstances beyond their control arise, making performance inadvisable, commercially impracticable, or impossible.

Tom Russell, Russell Marine Group told me on May 2, ahead of the river closure, that St. Louis Harbor authorities were allowing small harbor tugs to shuttle barges presently fleeted in the Harbor to a staging area at the lower end of the Harbor. "The shuttle tugs can move only one barge at a time during daylight. This will allow some tows to be assembled for southbound towage to the Gulf. The process will be slow and limited."

Russell added that the New Orleans and Baton Rouge harbors will "hover above the 16 feet level" throughout May and into June. All safety protocols will remain in place, which includes daylight-only transit and reduced tow sizes until water levels there drop below 16 feet.

Tom Heinold, the chief of operations for Rock Island's Army Corps of Engineers, told OurQuadCities.com, "What moves on this river has a very profound effect on our economy, and usually this time of year there are petroleum products, cement, and fertilizer for our farm fields," Heinold said. "That's all waiting down in St. Louis. That should be up here by now and getting out on the farm fields to support America's agriculture. We feed the world from right here in America's bread basket and that stuff is costing us money just sitting on barges."

The Rock Island District oversees 11 locks on the Mississippi River from Dubuque, Iowa, down to Saverton, Missouri. Close to 25 million tons of cargo that includes mainly agriculture products, such as soybeans, corn and DDG, pass through the locks in the Quad Cities every year.

In addition, liquid asphalt for roads and roofing is shipped down-river from the Twin Cities oil refineries. Canadian potash is transferred from rail to barge and carried to locations where it is distributed for use as fertilizer, according to the National Park Service. Other down-bound commodities besides those mentioned earlier include sunflower oil, molasses and flyash. Because of the flooding forcing lock and/or river closures in Iowa, Illinois and Missouri, tows normally moving empty and/or loaded barges north of the Rock Island District up to St. Paul, Minnesota, this time of year may be delayed, noted the USACE recently.

"The impacts of having the barges not moving on the river will eventually make it to all of our back pockets," added Heinold. "It's not clear how much money is at stake; that still depends on how long the locks will be closed.

As I have mentioned in nearly every flood story I have written recently, river forecasts can and will change depending on rainfall. In a weekend blog "Flooding and Wet Forecasts Threaten Both Corn Acreage and Yield Loss," written by DTN Senior Ag Meteorologist Bryce Anderson, he noted that the upcoming week to 10-day period suggests more rain ahead. DTN precipitation forecast maps on May 3 placed all but the northern Midwest -- north of Interstate 90 -- with a high chance of half an inch to 2 inches total rainfall, with the middle and lower Mississippi Valley areas, along with the Ohio Valley, possibly to exceed 2 inches in total rainfall.

Here is a link to the entire blog:

I have been writing about flooding on the U.S. River system since January, and I have a feeling this won't be the last story I write about it in the coming months. It has been a volatile and financially stressful year for grain shippers and especially farmers. They need a break. Frankly, so do all of the people and towns still affected by the relentless river flooding.

Here is a link to the NWS River Forecast: 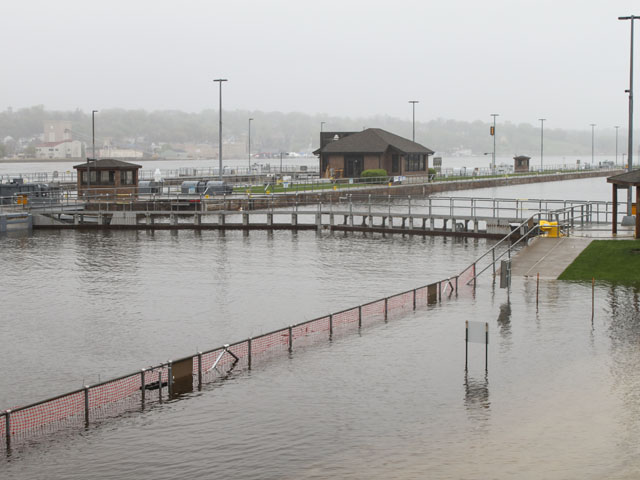