Severe icing has wreaked havoc on the U.S River system for weeks now and there is hope that forecasts for a warm-up the next few days may help alleviate some of that. Still, even if there is a slight meltdown, that ice needs to work its way down river and through locks, which could cause ice jams along their path.

Since my story on January 8 about the extreme cold weather causing icing throughout the U.S. river system, conditions have worsened; particularly on the Upper Ohio River.

Over the weekend of Jan. 12, ice and high water caused a 27-barge breakaway at the Jack's Run fleeting area at MM 4 on the Ohio River near Pittsburgh, while another 34 barges were carried away from a fleeting area at MM 94 near Moundsville, West Virginia, according to the U.S Army Corps of Engineers (USACE). As of Jan. 19, 25 of the 27 barges at MM 4 have been accounted for and all 34 barges at MM 94 have been accounted for.

At the USACE Pittsburg District, John Dilla, Chief at Locks and Dams Branch, provided an update Friday morning Jan. 19, via their Facebook page, on the unified effort to recover breakaway barges lodged at Emsworth Lock and Dam on the Ohio River near Pittsburgh. Dilla noted that the USACE, U.S Coast Guard (USCG) and navigation industry partners are working together and making progress on restoring navigation under challenging conditions. In the video update, he pointed out how they were digging ice out of the lock and nearby area on the river in order to restore navigation to the Region, a high priority for this group.

The entire video can be seen via this link: https://goo.gl/…

Late Friday evening, Jan. 19, the USCG in a press release noted that "Industry partners successfully conducted a barge test run at MM 95.7, and a queue is now forming with transit granted on a case-by-case basis." However, salvage operations are still pending as there are two unaccounted-for barges reported to be located above the dam.

The press release noted that the USACE is continuing ice-breaking and removal operations at Emsworth Lock and Dam. "The main chamber is now open and ice is beginning to flow through. However, there is still heavy ice stretching nearly 1 mile above the lock, which continues to impact operations. There are no reports of significant damage to Emsworth Lock and Dam and no environmental concerns from pollution.

USCG reported two safety zones, full waterway closures, which have been established from MM 95 to MM 105 and MM 2 to MM 20 on the Ohio River due to risk of channel obstructions.

American Commercial Barge Line (ACBL) in their daily river condition update Jan. 19 noted that on the ice-ravaged Illinois River, there is limited movement with significant tow size reduction. The maximum tow size is nine barges below Hennepin and four barges above. A major trouble spot has been Marseilles Lock, from miles 240 to 247 due to significant ice buildup in this area, making it difficult to transit. ACBL noted that based on the current forecast, they do not anticipate returning to normal tow size for another one to two weeks.

According to the USDA weekly Grain Transportation Report, weekly grain tonnages along the inland waterway system have been significantly reduced since late December due to icing. For the first two weeks of January, grain barge tonnages were 496,000 tons; 63% lower than the same period last year. Ice accumulation on the Illinois River has reduced the number of up-bound empty barges to 10 for the week of Jan. 13. During the same period last year, 180 up-bound empty barges were shipped on the Illinois River. A number of barge lines have continued to suspend operations on the Illinois River and portions of the Ohio River until conditions improve. Low water and ice are slowing traffic on the Mississippi River in the St. Louis, Missouri, area, especially where heavy ice buildup around locks are not allowing lock gates to fully open.

Whenever barge transportation faces slowdowns, due to weather or constant repairs, the results are always passed onto farmers in the form of higher barge freight costs, and at times, their inability to haul grain to a river terminal. "If there is a supply chain disruption and logjam along the river, soybean and grain shippers that utilize the inland waterway system are less able to move product via their back door," said Steenhoek.

"If a soybean and grain shipper cannot move product via their back door, they are less able to accept product via their front door. As a result, soybean and grain shippers will drop the price offered (i.e. basis will be widened/more negative) to farmers. Therefore, farmer profitability will be impacted not because they did anything wrong, but simply because the supply chain is not operating as expected."

"Given that 80% of soybean exports depart from the U.S. between September and February, this is a critical period for our supply chain to be operating as normal. Any impediment, like the ice accumulations impacting areas of the inland waterway system that normally are operating at this time of the year, have a negative impact," concluded Steenhoek. 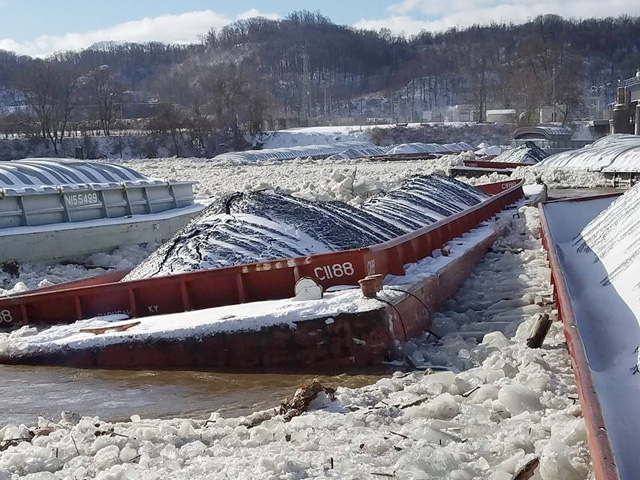