Severe flooding in the central portion of the U.S. has devastated river towns and farmland in its path and has caused over a dozen deaths. The flooding also resulted in closing a portion of the Mississippi River south of St. Louis due to high water endangering tows pushing barges through floodwaters. Additionally, the U.S. Coast Guard closed 76 miles of the Mississippi River from Chester, Illinois to Cairo, Illinois late May 4.

Transportation of all agriculture products and other products has either stopped or has been slowed on nearly all river segments. Empty barges are unable to move north past the river closures to terminals that want to ship corn or beans or other commodities to the Gulf.

Loaded barges in the area above and below the closures are stopped from moving as well. However, on May 8's morning, the area from mile market 179 to 184 reopened with "excessive" delays expected according to barge lines. While the Ohio River is still open, high water operating conditions are in effect for the mid to lower portion of the river. Mile marker 33 to 110 near Cape Girardeau is still closed and is not expected to reopen until May 9.

Arkansas, Oklahoma, Missouri and Illinois were hit the hardest by flooding are now watching and waiting for rivers to crest and floodwaters to recede. In Arkansas, there were five rivers that breached levees. The Black River reached a record of 28.95 feet. The White River, which runs in to the Arkansas River, is expected to crest at 36.5 feet on Wednesday. The Arkansas River, which meets the Mississippi River at Rosedale, is currently closed to all navigation due to flood conditions.

Flooding and other storm damage hit about 937,000 acres of Arkansas cropland, with losses to farmers currently estimated at $64.5 million, according to a preliminary estimate released May 4 by the University Of Arkansas System Division Of Agriculture. Jarrod Hardke, extension rice agronomist for UA, estimated 156,000 acres (planted) of rice were lost, 83,200 acres of soybeans damaged, 47,900 acres of corn flooded, and 9,300 acres of cotton were destroyed. The latest USDA crop progress report showed 89% of the state's expected 1.2 million acres of rice had been planted with 71% emerged; 45% of the soybeans were planted and 97% of corn was planted with 89% emerged.

Tom Russell, co-owner of the Russell Marine Group New Orleans, Louisiana, told DTN that many areas on the Illinois River are above flood stage. "Traffic cannot move due to swift flows and bridge clearances. Water levels will be on a slow flush over the week. In the mid-Upper Mississippi, above St. Louis, the river is in high water conditions with slow and limited traffic movement, which is further hindered by locking delays due high water."

In the Upper Mississippi, the St. Louis Harbor to Cairo portion of the Upper Mississippi (UMR) is closed to all traffic. On May 6, the river at St. Louis was at 42.28 feet, with major flood stage at 40 feet. There are also closures in the corridor between St Louis and Cairo. The Ohio River at Cairo, Illinois, where the Mississippi River meets, was at 51.96 feet May 8 and is expected to reach 52.5 feet by May 10. Moderate flooding is 40 feet above zero gauge and major flooding is at 53 feet. While the Ohio River is still open, high water operating conditions are in effect for the mid to lower portion of the river.

Because of the closures, barge freight rose in the corridor above St. Louis due to very few empties available north of the river closure. The closure means empty barges can't get up river to fill needs in the UMR, and any loaded barges cannot get past St. Louis. Barge movement along much of river system is basically on hold until flood waters recede and the river reopens. This has also strengthened rail basis for corn and soybeans delivered to St. Louis.

In the Lower Mississippi (Cairo to New Orleans), water off the Illinois, Upper Mississippi and Ohio River is starting to push downriver," said Russell. "The river in many areas is now high enough to stop loading operations at numerous terminals." High water operating conditions exist in the LMR and tows are subject to daylight transits in some areas.

New Orleans and Baton Rouge Harbors will remain open, but stages are expected to be revised to near flood stage levels as the water comes down. Russell said, "Some safety protocols are now implemented and more will come. Moving barges and ships will certainly be slowed. Additional protocols will include daylight traffic restrictions in some areas. Docking and undocking daylight only, extra tug power in fleets and perhaps stand-by at some vessels."

The Mississippi River at the Carrollton gauge in New Orleans rose above 11 feet, prompting the U.S. Army Corps of Engineers (USACE), New Orleans District, to reactivate Phase I flood fight procedures as of May 4, according to a news release by the USACE. "Closely coordinating efforts with the local levee authorities, the New Orleans District will begin patrolling the levees along the Mississippi River south of Baton Rouge twice weekly until the water level drops below 11 feet at the Carrollton gauge," said the Corps in the press release. On Sunday, May 7 the water level was at 12.28 feet and is expected to rise to 12.60 feet on May 8.

The USACE and State of Louisiana have established distances for certain types of work that can adversely affect the integrity of the federal levees and structures. All work that may impact the Mississippi River and Tributaries (MR&T) levees, which includes transport of heavy loads over the levee, disturbance of grass cover or subsurface work within 1,500 feet of the levee, is prohibited when the Mississippi River elevation reaches 11 feet and rising at the Carrollton Gage in New Orleans.

Basically, the river system is still backed up. "It will still take time for the system to get back to normal operations. As levels fall and movements start to resume, expect and plan for continued traffic delays. Restrictions such as daylight movement only in many areas and tow size restrictions will be in place for a period of time," concluded Russell. 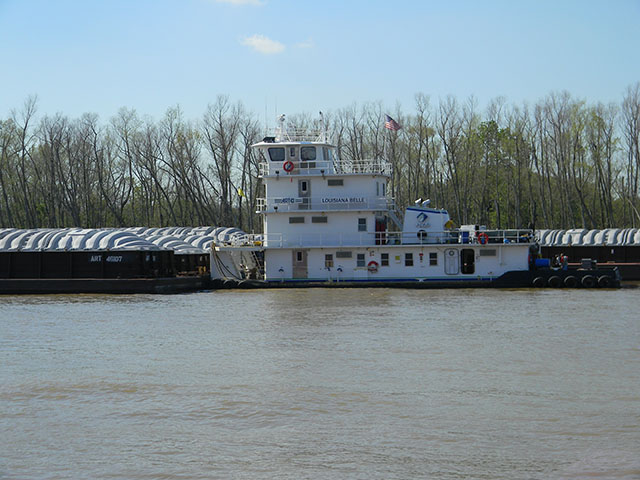