How should a grain marketer handle the inverted futures spreads, and, more specifically, the 80-cent inversion between old-crop March corn futures at $5.62 and new-crop December corn futures at $4.82?

Step 1: Go out and measure how much unhedged old-crop corn you have left in your bins. If it's more than zero bushels, pat yourself on the back for being clever. If, on the other hand, you (like pretty much everyone else) are sold out of old-crop grain already, because the prices at harvest were attractive and the past several years have taught us to grab profitable prices when we see them, then this old-crop/new-crop inversion feels a lot more frustrating.

The typical structure of futures markets for annually produced commodities, such as corn, is a "carry" spread structure, where the price a few months from now tends to be higher than the price today. This reimburses owners for the costs of "carrying" the grain in storage.

When the March 2021 corn futures price is $5.62 per bushel, then the May 2021 corn futures price would generally be higher than that, usually about $0.08 per bushel higher, suggesting commercial grain elevators can afford to store the grain from March to May (paying for elevator operations -- energy, insurance, labor -- and the interest charge for deferring the income) for something less than $0.04 per bushel per month. These nearby carry spreads never tend to get wider than $0.14 to $0.16 cents (record from Aug. 30, 2017) at the end of August, offering $0.053 per bushel per month to carry corn between the old-crop September timeframe and the new-crop December timeframe. In theory, carry spreads won't ever get any wider than that, otherwise, commercial grain companies would take the opportunity to deliver physical grain against the overpriced futures contract, thereby bringing the market back in line.

How extreme could it get?

There is no theoretical limit -- in some version of reality, the market could decide scarce old-crop corn is worth $12 per bushel and abundant new-crop corn is worth only $3 per bushel. Unlikely -- but who knows? We can look at history to see how big the old-crop-to-new-crop inversion has reached in the past.

The record for the biggest old-crop-to-new-crop inversion -- $1.93 1/2 per bushel -- was set on July 5, 2013, when the country was pretty much panicking about running out of corn after the 2012 drought (the old-crop July contract was $6.8475) but relatively confident about renewed supplies arriving with the 2013 harvest (the new-crop December contract was $4.9125). Note that's not the date when old-crop corn futures hit their highest-ever intraday price tag -- $8.4375 on Aug. 10, 2012 -- or even the highest old-crop price tag during the summer of 2013 -- $7.30 on July 11, 2013. The record high inversion was simply the reflection of the biggest disparity between two crop years' bullish or bearish prospects. The inversion eventually faded away because the July futures contract expired and went off the board, taken over by the September futures contract, which sagged when southern corn supplies became available, and also because the new-crop December 2013 contract started receiving some bullish attention of its own, rising to $5.00 by the end of August.

Perhaps the more relevant historical example for us to be considering today is the spring and summer of 2012, when the past year's supply was only a little tight and no one knew yet what drought was in store for the upcoming crop year. In early March of that year, old-crop corn futures were at $6.50 and the sanguine prospect for a typical big harvest put the new-crop corn futures at $5.62 -- an 88-cent inversion, very similar to the futures spread structure we see today.

Traditionally, inverted futures spreads like these are a signal from the eager market to grain owners that they should sell, sell, sell! No one will reimburse you for storing that grain for another month, so get rid of it. This is absolutely true for commercial grain elevators with hedged bushels. If they stay long in physical grain hedged by short futures positions, and intend to carry the grain to an upcoming timeframe and roll their short futures positions forward, they will get killed by the roll. Buying out of a March futures hedge at $5.62 and re-establishing a short May futures hedge at $5.44 will only lock in an 18-cent-per-bushel loss.

Rolling inverted futures is a troubling concept for farmers, too. I was asked recently (by someone who was only half-joking): "How come I can't sell to my elevator at $5.50 today and just not deliver until after harvest?"

That is the fundamental problem -- grain may be bullishly demanded today but a new surge of supply won't physically exist until October or November.

"Well," the farmer asked, "then can't I sell futures today at $5.62 and just keep rolling that price forward until harvest?" Again, the roll would be a killer. Each time a contract expired, the farmer would have to buy high and sell low to get out of the high-priced nearby contract and get back into a lower-priced deferred contract. By December, the 80-cent inversion would have disappeared into the void of his futures brokerage account.

"Well," he persisted, "then can't I just trade the spread itself?"

If you feel a strong expectation that history will repeat itself and the old-crop-to-new-crop inversion is going to widen further from today's $0.80 to perhaps the record-high of $1.9350 or even the widest Spring 2012 level at $1.1275 (April 3, 2012), then yes, a futures trader could buy the May contract and simultaneously sell the December contract. The CME will even give you a bit of a break on the margin required for a spread trade as opposed to an outright directional futures speculation. However, be aware that this is still a speculation. It's not a hedge offset by any physical bushels.

There is a rather large theoretical limit to how much this bull spread trade might lose (the 80 cents of inversion plus the 19-or-so cents of traditional carry the May-to-December spread could re-adopt). And it could be a wild ride -- the old-crop-to-new-crop spread in the summer of 2013 flailed dramatically up and down by about $1 per bushel several times before the commotion was over. I'm not saying don't do it; I'm not saying it might not work really well as a speculative trade between now and July (if you can get out of the contract in time). I'm just saying be aware that it's a risky speculation, not a risk management strategy.

That leaves one strategy left for North American corn farmers who want to get something of the hot near-term prices. First of all, sell whatever unhedged old-crop corn you do have at the moment you think that the market will be most desperate for it (i.e. watch those summer basis bids).

Secondly, if you're in a region where planting early and harvesting early will make it possible to get corn to market in the September timeframe, do that. The September-to-December futures spread only represents 18 cents of the total inversion we're seeing today, but cash bids that I've looked at (including the influence of hot September basis) are showing September prices better than October prices by 35 cents or more.

Market examples are not recommendations for trades. Trading commodity futures and options involves substantial risk of loss and may not be suitable for all investors. Past performance is not indicative of future results. 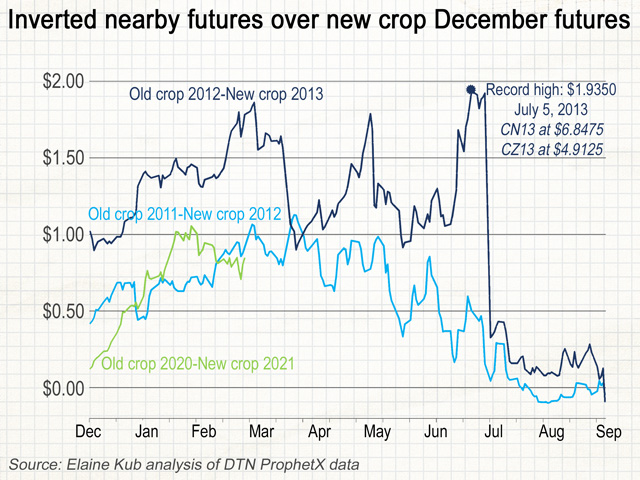