I went back to corn school this week. I always feel like that when I head to the field with Jeff Brown of Blue Mound, Illinois.

The perennial corn yield contest winner watches every little detail of the crop. Asking him to pull a corn yield sample is like asking him to breathe.

Walking down the row, he grabbed a few leaves and held them up to the sky to look for possible disease -- there's very little. He folded his lanky frame down to ground level and looked up. "I like to plant to get 95% light interception," he said.

He observed ear placement. "That stalk came up about two days later than the one next to it," he said, putting the squeeze on a smaller ear on a smaller stalked plant with an ear set slightly higher than its neighbors.

"That stalk could have been a weed, but we've had a decent year and it's going to make something, but I still don't want to see much of that," he said.

When quizzed about why the emergence delay, Brown reckoned that it was the direction the seed was turned while planting. Tip down into the soil, the root and coleoptile do not waste time and energy wrapping around the seed. That's particularly important if soils are cooler.

We drew our yield sample from a field packed with memories for Brown. The field sits just outside of the small town of Boody, Illinois. It the first parcel of land he and his wife, Amy, purchased together, just weeks before they married.

Brown is one of those guys that can look at the crop and make an educated guess as to what it is likely going to yield without a calculator. The fertility, weather, pollination date and all those little factors that go into the corn crop seem to constantly clack through his brain.

But I'd asked him to pull a sample and it is on his calendar to check all fields next week. So, this was an early sneak peek. "We probably lost two days of GDU's when temperatures dropped the first week in August," he said, noting that those things matter when you have early contracts to meet at the local processor.

There are several formulas for figuring corn yield and of course, they all result in estimates.

Brown prefers a yield measurement formula that is like The Yield Component Method. Purdue University offers details of those calculations here: https://www.agry.purdue.edu/…

Brown uses kernel rows around, length of ear with viable kernels (kernel rows) and number of ears per acre to come up with a representative number of kernels per acre.

But what he also likes to take into consideration, that other formulas often do not, is the weight per kernel. Final weight can't be measured until black layer, or full maturity, so we came up with a range of possibilities.

On Friday, the 2021 DTN Digital Yield Tour powered by Gro Intelligence expected Illinois to hit a statewide average corn yield of 203.35 bpa, compared to the most recent NASS estimate of 214 bpa. Macon County, where Brown's field is located, was estimated at 223.6 bpa.

The DTN tour is an in-depth look at how this year's corn and soybean crops are progressing using Gro's real-time yield maps, which are generated with satellite imagery, rainfall data, temperature maps and other public data. Unlike static estimates, Gro's yield projections update daily on a county and state level, so the numbers at publication time may be slightly different than what you find on the Gro website.

Back on the truck tailgate doing calculations, Brown found a bit of corn borer or ear worm feeding on the tip of one ear. Since the worm was missing, we were guessing the pest, but corn borer moths have been flying lately. He pointed to an area on another ear where the kernels were pinched together. "That particular plant had some stress that day -- maybe a little wind -- something happened," he said.

What Brown would also tell you is that field has been blessed with 31 inches of rain -- 3.5 inches of it came this week as those kernels keep packing on weight. Normal rainfall for this area would be 25 inches, he said.

Farmers who have gazed skyward this season and wished for mere drops would consider this a field of dreams. Still, only a few miles away, sits another field that Brown's sons, Marshall and Walker, referred to as the "911" field. The field took on a 7-inch rain soon after crop emergence and never recovered.

"That field is evidence of the value of field tile," Brown said. "Yields could be up to 100-bushel off in that field compared to nearby fields that are tiled." The entire planting season was something of a rollercoaster this year. In 2021, he replanted nearly 500 acres across several thousand acres of corn due to spring rain deluges that caused emergence problems.

Soybeans also started out slow as early cool weather held them back in this part of the central Illinois. On Friday, the DTN yield tour projected Illinois soybean yields will come in at 61.06 bpa compared to the NASS projection this week of 64 bpa. Macon County was pegged at 67.37 bpa by Gro. Find the Illinois numbers for corn and soybeans from Gro here: https://app.gro-intelligence.com/…

Brown and I didn't draw a soybean estimate. "I'm always dead on when estimating soybean yield," he said. "They consistently yield from 0 to 100 bpa. You can count on it every year."

Like I said, I learn something every time I go to the field with this farmer.

For a review of another simple formula for estimating yield often used by crop tours go to: https://www.dtnpf.com/…

To find the final results of the 2021 DTN Digital Crop Tour go to: https://www.dtnpf.com/… 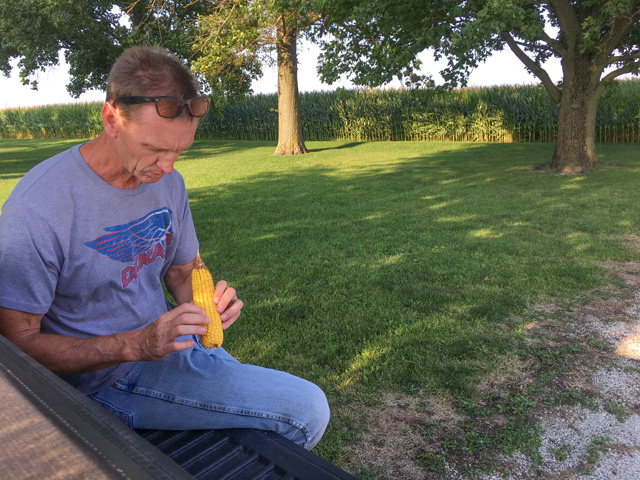