The start of the 2019 navigation season in the Upper Mississippi River (UMR) was late and drawn out. The first tow didn't make it to St. Paul, Minnesota, until April 24, 2019, when Motor Vessel Aaron F. Barrett, pushing 12 barges, finally locked through Lock and Dam 2 near Hastings on that date. The average date for the first tow to reach St. Paul is around March 18, but historic flooding and ensuing lock closures downriver kept most of the UMR closed on and off for months.

After MV Barrett arrived, St. Paul would not see another tow for more than three weeks on May 20. Besides the Mississippi River in St. Paul sitting in flood stage for 42 days through May 7, 2019, there were also lock closures in the Rock Island District during that time, stopping any vessels from coming upriver.

When barges were finally able to make their way into the UMR in late summer, the delayed corn and soybean harvest left hundreds of barges parked along the Mississippi River in St. Paul from early fall through November, with most of them moving back downriver empty ahead of the winter closure.

Jim Rand, St. Paul District locks and dams chief, noted that the 2019 shipping season was one of the more challenging seasons the district has had in a while.

"We had a really late start due to Mother Nature and fought high water much of the summer," he said.

On Feb. 5, 2020, the United States Army Corps of Engineers (USACE) released the 2019 navigation lockages at Lock and Dam 10, for the Upper Mississippi River.

USDA reported low volumes for barged grain in their Synopsis of Agricultural Transportation in 2019.

"From late 2018 through August 2019, poor navigation conditions due to flooding slowed barge traffic, particularly through the locking portions of the Mississippi River," USDA said. "By August, the flooding was replaced by a rapid drop in water levels, causing low water and shoaling."

In late August 2019, USDA noted in their weekly Grain Transportation Report that the navigational issues, combined with recent high barge shipping rates and a low supply of barges upriver, decreased the number of grain barges and volume of grain transiting the locks above St. Louis.

"Although volumes recovered in November and December, the yearly total for barged grain was 23% lower than in 2018 and 28% lower than the average of the previous three years, mainly as a result of low volumes of barged corn," added USDA.

The persistent flooding had an impact on cash basis in the spring and summer of 2019, especially corn. The DTN national average basis for corn was hovering around the five-year average for the first part of 2019 until it spiked in late June when the UMR locks finally opened up. Then, at the end of August, it finished the 2018-19 crop year 17 cents above the DTN five-year maximum average.

Besides barges stalled trying to head north or south in the spring and early summer, many farmers were unable to haul their grain to river terminals in areas where their yards and farms were flooded and road or rail access was blocked.

START OF 2020 NAVIGATION NEAR, BUT FLOODING PERSISTS IN LOWER MISSISSIPPI

The USACE St. Paul District started their 2020 ice measurements on Lake Pepin Feb. 19, finding an average of 17inches at the thickest spots. The team measures at one-mile intervals and follows the main course that the navigation industry uses. Tows can push barges though 10 to 12 inches of ice, and with warmer weather descending on the Upper Midwest, we may see an early open this year.

Lake Pepin is the largest lake on the entire Mississippi at 21 miles long. It starts south of Red Wing, Minnesota, and extends to Reads Landing near Wabasha. The lake is the last hurdle tows face for the opening of the spring shipping season. Lake Pepin is a part of Pool 4, which extends from Lock and Dam 3 near Red Wing, Minnesota, down to Lock and Dam 4 at Alma, Wisconsin.

American Commercial Barge Line (ACBL) said, "Levels are in flood stage from Cairo to the Gulf, driving a 5-10 barge Tow Size reduction, or a 14-24% reduction in productivity. Furthermore, daylight restrictions in Memphis, Vicksburg, and Baton Rouge are increasing transits by as much as two days or 40%."

On Feb. 22, National Oceanic and Atmospheric Administration (NOAA) issued a forecast for the LMR and noted that major flooding has occurred or is forecast. One of the worst spots is currently at Baton Rouge, Louisiana, which, in 2019, was in flood stage on Jan. 6 and stayed above flood stage for a record 211 consecutive days. On Feb. 24, 2020, the river there is just hovering above major flood stage at 40.54 feet and is not expected to crest until around March 4 at 41 feet. https://www.weather.gov/…

ACBL added, "If additional rain continues in March, we could be headed for an extended flood situation similar to 2019." 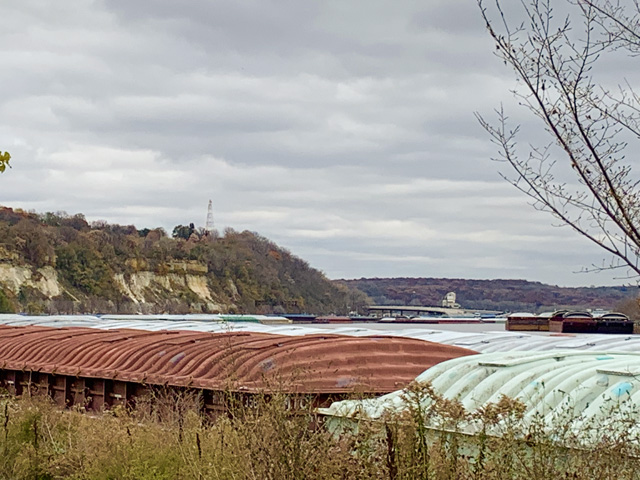