A special report on El Nino's influence on winter weather conditions was sent out by the Missouri Basin Regional Climate Center -- part of NOAA -- at the end of last week. The report was organized by regional climate center director Doug Kluck.

The main effects of El Nino in winter across North America are:

2) The Pacific jet stream across the southern U.S. continues through the winter season, and is stronger than usual for the season. Wet conditions in winter have a high likelihood over the southern U.S. This includes southern California--which almost everyone is eyeing carefully for some kind of drought relief potential. (NOTE---best moisture chance is in SOUTHERN California. NORTHERN California is not nearly as likely to share in the wet winter scenario.)

3) With the precipitation focused over the southern part of the country, below-normal precipitation (dry winter) is quite likely in the northwestern U.S. and the eastern Midwest.

The special report has this reminder: "Keep in the mind that this (above-normal general pattern) does not mean that cold weather will not happen this winter. Extreme cold weather may be milder and less frequent, however."

As far as snow is concerned--chances are low. "Snowpack can also be impacted by the typical El Nino winter pattern as well. Snowpack in the northern Rockies and Plains can be reduced and heavy snow events may be less frequent," the report says.

Regarding the staying power of this El Nino, the report says,

"El Nino conditions have continued this summer and forecasts indicate that this El Nino will strengthen, peaking as a strong event in late fall or early winter. According to the Climate Prediction Center, there is a greater than 90 percent chance that these conditions will last through the winter and above an 85 percent chance that El Nino will continue into the early spring. Research has shown that strong El Ninos are often followed by La Ninas, so conditions should continue to be monitored closely, especially if the El Nino weakens next spring, as predicted." 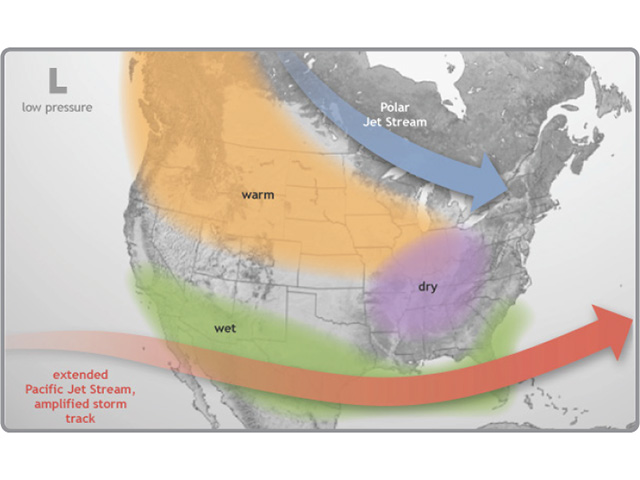