Crop season 2022 is much different in the central and southern U.S. crop areas than a year ago. A key detail in that difference is simply that this year was hotter than last year -- not only during day, but also at night.

July 2022 posted the hottest nightly temperature average for any month in 128 years of record keeping, according to statistics from the National Oceanic and Atmospheric Administration (NOAA). The contiguous U.S. had an average low temperature in July of 63.6 degrees Fahrenheit (17.6 Celsius). That was more than five degrees Fahrenheit warmer than the 20th Century average.

Central and southern U.S. crop areas have borne the brunt of that midsummer heat and it's showing in both graphic displays along with in-field looks at crops. From approximately Interstate 90 at Sioux Falls, South Dakota, south, vegetation index scores are much worse than at this point in 2021. Shades of orange and red, indicating dry and withering crops and pastures, are widespread on the vegetation index chart. And in the field, corn tip back -- caused when developing corn kernels at the end of the cob die off when it's too dry -- is notable.

That inability of crops to completely revive even with a dose of rain in late summer was evident in the Monday, Aug. 22 USDA weekly Crop Progress and Condition reports, following a week when periods of rain worked across the U.S. heartland. Moisture and milder temperatures make up the combination for improved crop ratings. However, that didn't happen. Corn and soybean ratings slipped from the previous week, even with that spell of more favorable weather. Again, that shows the impact of the hot, dry June and July pattern, which put corn and soybeans in a stressful situation right away.

Conclusion: Row crops are showing the effect of stress brought on by hot days and nights during midsummer. Effects on corn are notable. It will be interesting to see how extensively soybeans respond to late August rainfall. 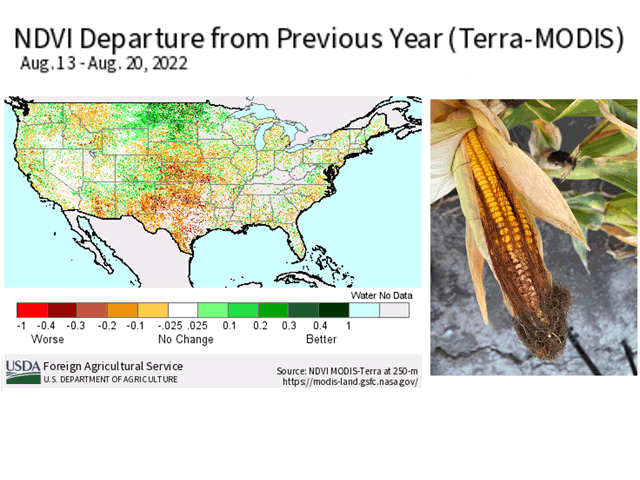