Early July has been a hot and stormy period from south to north in the interior U.S. as a strong upper-atmosphere high-pressure ridge in the Ohio Valley and Delta combined with a deep upper-level low-pressure trough in the Pacific Northwest to produce either hot and dry or stormy and wetter conditions.

Southern crop areas have had blistering heat. For example, as of July 4, Austin, Texas, had already tallied 24 days of 100 degrees Fahrenheit or hotter this calendar year, the most in recorded history. Only 17% of the cotton and 15% of the sorghum in Texas rated in good condition as of July 3. The hot ridge could be a dome of doom in this region.

"Agricultural losses this year in Texas could get really ugly," said Victor Murphy of the National Weather Service climate office in Fort Worth, Texas.

Heat stress warnings have also covered much of the southern Midwest, lower Ohio Valley and Delta. In the southern Midwest, Kentucky had a 19-percentage-point decline in its weekly soybean crop conditions during the week ended Sunday, July 3, because of the effect of heat and dryness. Illinois corn conditions decline by five percentage points; Indiana's corn had an 11-point swoon; Kentucky 25 points; Tennessee six points; and North Carolina nine percentage points lower than the previous week on the good to excellent total.

Meanwhile, crop areas in the northern through south-central Plains and the northern, western and eastern Midwest saw rainfall totals for the seven days from June 29 through July 6 of .75 to 2 or more inches. Locales which received this rainfall had some useful moisture for crops ahead of key reproductive phases. As of early July, USDA reports corn 7% in the silking phase, compared with 4% the previous week and behind the five-year average of 11% in the silking phase. Soybeans are slowly moving into their prime reproductive phase with 3% of the crop reported to be setting pods, in line with the average pace, and 16% of the crop in the flowering (bloom) phase, a bit behind the average of 22%.

In addition, Northern Plains crops are in a much more favorable situation compared with harsh drought conditions of last year. DTN Contributing Analyst Tregg Cronin noted in the Wednesday, July 6, Early Word Grain comments that "In the U.S., spring wheat conditions were raised to 66% good to excellent versus 59% expected, 59% last week and 16% last year. Spring wheat conditions are now above the five- and 10-year averages with solid jumps seen in Minnesota, North Dakota and Montana."

The forecast through mid-July offers a break in the heat over the southern Midwest. The focus of hot upper-air high pressure is indicated to move to the western U.S. and extend far north to the northwestern Canada archipelago of islands in the Arctic region. At the same time, cooler upper-level low pressure is featured in the Great Lakes-Ohio Valley. This combination brings more seasonal temperatures to the U.S. east of the Rockies; however, very warm to hot conditions remain stubbornly in effect for the far Southern Plains, especially across the southern half of Texas.

An important item is how the remainder of the summer evolves. La Nina in the Pacific Ocean is forecast to still be around through the balance of the season. If conditions allow the western U.S. ridge to move into the Plains and the western Midwest, heat and dryness could expand vigorously, even into areas which benefited from the early July rainfall event. 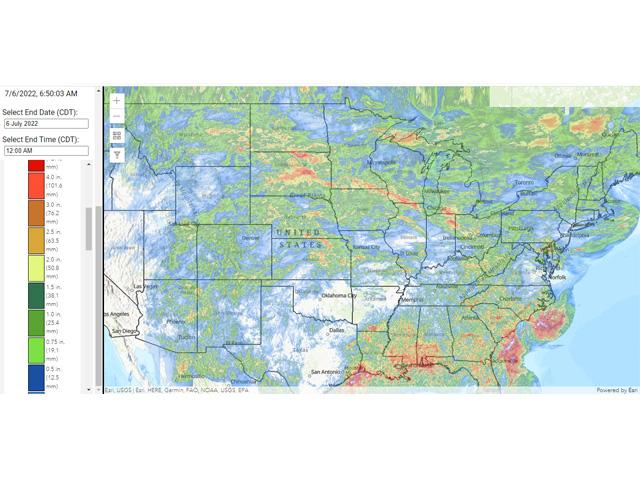