Live Cattle: The February contract closed $0.95 higher at $116.30. The market's secondary (intermediate-term) remains up. However, weekly stochastics are well above the overbought level of 80% as the contract tests next resistance near $117.80. This price marks the 50% retracement level of the previous downtrend from $137.75 through the low of $97.80. If support continues to come from commercial buying, as indicated by the strong uptrend in the February-to-April spread, the Feb contract could extend its uptrend to the 67% retracement level near $124.50.

Feeder Cattle: The March contract closed $0.40 higher at $126.70. While the secondary (intermediate-term) trend remains up, the March contract may be running out of momentum as it trades above resistance at $125.80. This price marks the 50% retracement level of the previous secondary downtrend from $142.525 through the low of $109.075. However, with weekly stochastics still below the overbought level of 80% an extension to the 67% retracement level near $131.40 is possible.

Lean hogs: The February contract closed $1.50 lower at $63.20 last week. Though the contract remains in a secondary (intermediate-term) uptrend it is finding increased selling interest near resistance at $64.80. This price marks the 76.4% retracement level of the previous secondary downtrend from $70.125 through the low of $47.525. Weekly stochastics are approaching the overbought level of 80%.

Corn (Cash): The DTN National Corn Index (NCI.X, national average cash price) closed at $3.07 1/4, down 8 3/4 cents for the week. The secondary (intermediate-term) trend has turned sideways with resistance at the 4-week high (weekly close) of $3.17 1/2 and support the 4-week low (weekly close again) of $3.03 1/4. Weekly stochastics did see a bearish crossover last week, but below the overbought level of 80%. This leaves open the possibility of an exhaustion rally to test next resistance near $3.23 1/2 before the secondary trend turns down.

Soybean meal: The March contract closed $9.80 lower at $311.60. March soybean meal has moved into a secondary (intermediate-term) sideways trend between resistance at $332.80 and support at $309.80. Last week saw the contract post a new 4-week low of $311.00, indicating continued pressure from both noncommercial and commercial traders could result in a test of support. If $309.80 fails to hold, longer-term support is down at $298.20. 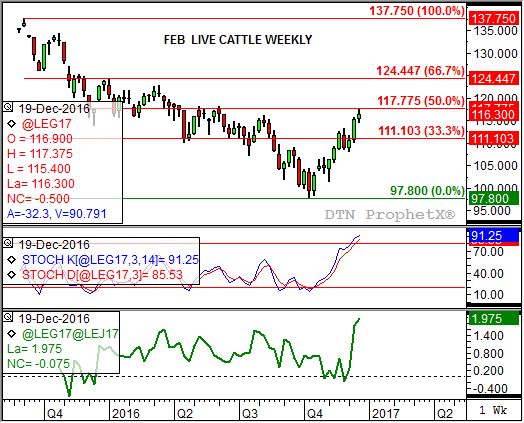