As cleanup was just beginning from the damage left behind by Hurricane Harvey, a second hurricane named Irma roared across Florida and into Georgia. Irma created more transportation woes, in addition to the devastation of people's homes and businesses.

On Sept. 10, Category 4 Hurricane Irma made landfall on the U.S with maximum sustained winds of 130 mph. It weakened through the day as it made its way up Florida, but its impact was felt far from the path of the tropical cyclone's center.

As of Sept. 12, government officials said there were 15 million people in Florida and Georgia without power. In Jacksonville, Florida, 400 miles north of where Irma first hit, a record storm surge hit on Monday, closing down bridges and roadways.

The Port of Savannah in Georgia was to be closed at least through Sept. 12, according to the Georgia Ports Authority. This port accounts for nearly a third of U.S. poultry exports along with other agriculture commodities including DDGS and is the fourth-busiest container port in the country. The Port of Charleston in South Carolina halted operations Monday, but reopened along with all other terminals and facilities Tuesday with no restrictions. The Port of Tampa Bay reopened the port with restrictions the afternoon of Sept. 12.

On its website on Sept. 11, the CSX, based in Jacksonville, Florida, noted that "assessment and recovery efforts from the extensive impact of Hurricane Irma are underway."

CSX went on to say, "Several areas remain without commercial power and continue to have flooding associated with storm surge and downed trees. CSX engineering crews are assessing the full impact on network infrastructure across affected regions where and when it is safe to do so. During this time, our main priorities are the safety of our employees and meeting the needs of our customers." https://www.csx.com/…

On Sept. 12, Norfolk Southern in a service alert on its website stated that "recovery efforts are underway to restore service to areas impacted by Hurricane Irma." Norfolk Southern is removing trees from the tracks and assessing overall track conditions. Routes are being restored to service as it is safe to do so, and it has started to meter in traffic accordingly. Regional flooding and power outages continue to affect the areas affected by the storm.

A second service alert stated that, "Effective immediately the ingate is open for shipments originating at the Jacksonville Intermodal facility. To enhance velocity through the facility, drivers ingating shipments will be required to also outgate a shipment. Drivers should exercise caution when arriving and departing the Jacksonville facility as downed-trees, localized flooding, and malfunctioning crossing-arms have been reported."

The company said effective 12:01 a.m., Sept. 13, "the embargo on shipments billed to Jacksonville, Savannah-Garden City, and all FEC destinations will be lifted."

Norfolk Southern noted that it will work with customers "to identify switching needs and service plans as recovery progresses. Once service is restored to affected routes, customers should continue to expect delays of 48 to 72 hours for traffic moving through and to all areas that have been impacted by the storm." http://www.nscorp.com/…

Port of Houston opened the Barbours Cut and Bayport terminals and Jacintoport on Sept. 1 and the Port Houston Container Terminals have been working with vessels to clear for transit. The upper part of the Houston Ship Channel, the area that connects the Port to the Gulf of Mexico, is still closed to ship and tow traffic because of a sunken dry dock, according to the Port’s website.

An alert on the Port Houston website stated that salvage operations continue and the sunken dock has not been moved yet. The alert said that U.S. Coast Guard and Houston Pilots will open the Houston Ship Channel to the City Docks at noon Sept. 13, limited to 90-foot beam and 33-foot draft. Here is a link to a Sept. 3 informational letter published by Port Houston: https://goo.gl/…

Export inspections for U.S. wheat going out of the Texas Gulf for the week ending Sept. 7 showed there has been some progress in Port activity as inspection numbers were higher than the dismal report showed during the week ending Aug. 31 when Harvey shut operations down.

Following the six-day record closure, the Port of Corpus Christi reopened with restrictions on Aug. 31 and then became fully operational on Sept. 1. The Port of Brownsville was reopened on Aug. 31 with no restrictions. All Ports have reminded vessels to be on the lookout for any floating debris that may surface in the water.

As far as rail service in Texas, the UP said, as of Sept. 7, the majority of service has been restored. At the height of the storm, 1,750 miles of track were out of service and 2,440 route miles were affected. As of Wednesday, just 50 miles of track are out of service and 420 route miles have been affected. To give a sense of the magnitude of work performed, here is a link to a presentation that further highlights the UP Rail Impact and Service Recovery Efforts: https://goo.gl/….

On Sept. 7, the BNSF reported that service was restored on all of its subdivisions affected by Tropical Storm Harvey in southeastern Texas. "Trains were moving again on our entire Longview Subdivision yesterday morning and our Silsbee Subdivision, between Beaumont and Silsbee, Texas, returned to service last night. The primary rail line connecting Beaumont and locations in Louisiana has also re-opened to traffic."

However, while service has been restored on nearly all affected rail lines, the BNSF said track and signal work continues in some locations. "Trains may experience delays during scheduled maintenance windows, and customers should expect extended transit times in the region until operations by BNSF and other rail carriers have fully normalized. We also continue to re-route some traffic around areas where service restoration efforts are ongoing, specifically locations along the Gulf Coast southwest of Houston."

According to the most recent service announcement, most embargoes put in place by BNSF and connecting railroads have been lifted; however, some remain active for shipments destined to/originating from, or passing through, locations in the region. BNSF is issuing permits allowing shipments on a case-by-case basis. The BNSF also reminded shippers to communicate with receivers in the Gulf Coast region to ensure they are operational before sending shipments. 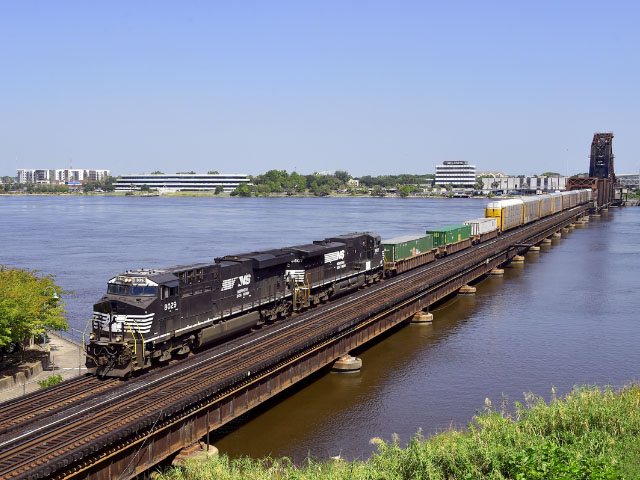