Whatever the near-term effects of the John Deere strike on delivery of machines and parts, the on-again, off-again, on-again walkout appears to be having only a marginal impact so far on the already existing months-long shortages of parts and new equipment.

It's a strange time for the farm equipment industry, even without the production implications of the John Deere strike this fall. At the onset of COVID-19, manufacturers found they had to pull in their horns -- often due to parts and -- at times -- labor shortages. Then, by the second half of 2020, the economy -- the farm economy included -- snapped back. A sudden wave of demand crashed headlong into supply disruptions not easily solved.

CNH Industrial was airfreighting, expensively, engine blocks from Brazil to Italy to keep production lines moving. Another manufacturer compiled a list of 200 critical parts and components it looked for continuously. Ag manufacturers in general found themselves in stiff competition with auto manufacturers for a surprising number of common components.

All this has caused troublesome ripples across the entire ag machinery industry.

New machines are built but not completed -- awaiting parts like electronics or tires. Delivery times for new implements have been stretched well beyond a single production year to two, maybe more. The lack of new machines has set the used equipment world on fire. Reports of used equipment selling for more than new are not all that rare. The lack of used equipment has caused shortages of used and salvaged parts -- even old tires. If they hold air, there is a buyer who rather take old tires than wait for new next spring.

"The parts shortage is bigger than the strike," said Matt Danner, who farms at Templeton, Iowa. Not so much on his farm, but rather a shortage of parts that would conceivably finish the planter he ordered at the end of this past May. "I'm not going to get it until next spring," he said. He'll take that planter when it comes -- he has a guaranteed price for it. But Danner is not counting on it for planting 2022.

Perhaps a bigger concern for Danner is future equipment purchases. He upgraded his Deere line this year. But he's been told by his dealer that if he wants major pieces of equipment for delivery in 2023, he should seriously consider placing an order in the next three weeks, before Thanksgiving. And that order comes with no lock on prices.

Quint Pottinger's challenge is finding used parts for his used equipment line. "We are abandoning any future equipment trades for 2022, as of now," said Pottinger of Affinity Farms, New Haven, Kentucky. "Our fear has been getting parts to upgrade or repair the equipment we trade for," he said. "Now, with the (Deere) strike, there isn't a guarantee we could finish repairs before 2022 planting."

Coley Bailey said he may hold onto his tractors "until I get a better picture of the Deere strike." Also, a better picture of just what is available. Coley, of Coley and Sons, at Coffeeville, Mississippi, generally trades his equipment line annually.

Bailey's Deere dealership is taking orders for parts needed by its customers. But it is not able to stockpile parts. "Parts I would have been able to get now are taking at least a couple of days longer," Bailey said.

As harvest approached this year, Ryan Bivins of Hodgenville, Kentucky, stocked $20,000 to $30,000 in spare parts and consumables. "The Deere strike is icing on the cake," he said. He's been waiting for corn heads and a draper head ordered in May, then promised in August and promised again in October. The draper head, for one, is awaiting parts -- parts previously identified, not affected by the strike.

"I'm thinking COVID is more of a crutch, an excuse," Biven said. He can't get the semi-truck tires he's been looking for and is waiting on grain carts that are waiting for lights. Parts normally coming by next-day air now show up in a week -- a speed more common with less-expensive over-the-road deliveries.

For Marc Arnusch of Keenesburg, Colorado, the availability of parts isn't so much of "I can't get it" but more "When can I get it?"

"There are tremendous delays," he said. "What took a day or two might take a week or 10 days." Hearing of delays in delivery of some of his base chemicals (glyphosate, 2,4-D, dicamba), Arnusch has already purchased his 2022 supplies and is storing them over the winter. Why the delays? His chemical rep explained it is due to a shortage of cardboard and screw-on caps for 2 1/2-gallon jugs.

Illustrating well the impact of parts shortages might be the tale of Arnusch's older StarFire 3000s. He sold them on the auction website BigIron for twice the amount he paid for his new 6000 units. For Arnusch, it was one instance where part shortages generated a happy income benefit. 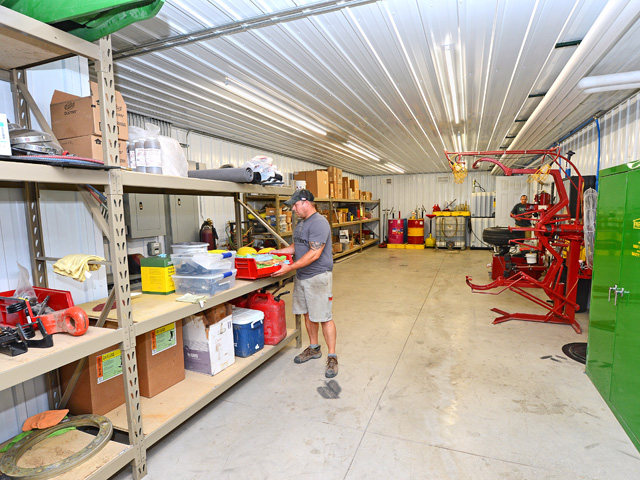