LINCOLN, Neb. (DTN) -- As agriculture interests continue to try to get a read on EPA Administrator Michael Regan and the future of the Renewable Fuel Standard, U.S. Secretary of Agriculture Tom Vilsack said on Monday that he likes what he sees from the new head of the agency.

The EPA is lagging behind on the release of a 2021 renewable volume obligations proposal for the RFS and has several small-refinery exemption requests pending for 2019 and 2020. So far Regan's EPA has kept its RFS playing cards relatively close to the vest as ethanol and agriculture interests watch.

Vilsack said he wants to see USDA and EPA work closely together on RFS and other issues important to agriculture, and so far, he said believes that will be the case on biofuels.

"The other day I was with a group of cabinet members in a meeting, and we were discussing climate," Vilsack told agriculture journalists during the North American Agricultural Journalists annual meeting beginning on Monday, "and we were going around and eventually got to administrator Regan. And during the course of his comments about the EPA and climate, one would have assumed that he would have focused on the regulatory side of his operation, which is pretty important."

Vilsack added, "But he also in his response mentioned the important role, biofuels play in climate. He recognized that the research is pretty clear. The biofuels are better in terms of greenhouse gas emissions than regular petroleum."

Since 2016 the EPA has granted 88 small-refinery exemptions to the RFS. This has led to an estimated loss of demand for ethanol of about 4 billion gallons. EPA's ability to grant waivers is at issue in a case set for oral arguments before the Supreme Court on Tuesday.

Vilsack said he wants to see EPA be open and transparent with USDA on any decisions it makes about the RFS.

"I'm very hopeful and certainly the EPA's initial pronouncements relative to waivers that we're going to get away from a place where waivers were routinely granted, back to the way the waivers were constructed to begin with, which was for those limited circumstances when a small refinery was having a difficult time for good reason," Vilsack said.

In the final days of the Trump administration in January, then-Agriculture Secretary Sonny Perdue signed a memorandum of understanding with an assistant secretary for Health and Human Services that "clears a path" for USDA to take over as the primary regulatory jurisdiction for gene-edited livestock.

Then Food and Drug Administration Commissioner Stephen Hahn objected to the move.

The memorandum spells out responsibilities for using genetic engineering of animals for human food, fiber and labor. The move follows President Donald Trump's executive order in 2019 to streamline the regulations around animal biotechnology.

The MOU gave USDA authority to start drafting rules for regulating genetically engineered animals through the Animal Health Protection Act. The proposal drew support from a number of agriculture groups.

Vilsack was asked whether he was comfortable with the current process at FDA.

"I will say generally the relationship between the FDA and USDA is often an interesting one," Vilsack said.

"I think there are times when I'm sure they get frustrated with us. And I know there are times when we get frustrated with them. I would say this, that whatever the structure is, however it's arranged or ultimately decided, it is going to become necessary to have transparency. It's going to be necessary because I think the consuming public, the market demands that. I think we need to have figure out ways in which, whatever decisions are made by whatever entity or agency making them, that they're made, as expeditiously as possible."

Because the world of genetic technologies is moving quickly, Vilsack said there needs to be a system in place designed to respond quickly.

"If we don't have the structures in place to make quick decisions, good decisions, quality decisions as quickly as possible we can really reduce the pace of change fairly dramatically," he said.

Vilsack pointed to a new feed additive designed to reduce methane emissions in the dairy industry as an example of the speed at which technology moves.

"It's going to take a lot more time in the U.S., and the reason being that, as I understand it, the structure that's used at FDA to review this particular feed additive has it as a pharmaceutical product," Vilsack said, "which requires a whole raft of tests and years and a lot of expense, when that's not necessarily the case in the New Zealand and the EU."

In June 2019, the Trump administration announced it was moving USDA employees with the Economic Research Service and the National Institute of Food and Agriculture to Kansas City, https://www.dtnpf.com/….

At the time of the move, about 100 USDA personnel decided either to retire or made the decision not to move. The agency has been trying to fill the positions during the past couple of years.

There are still a number of positions left to be filled, Vilsack said.

Vilsack said not having the positions filled has made it difficult on current employees.

"You've got people that are working two or three jobs," he said. "The reality is if you're working three jobs you're going to get burnout, and you're going to look for an opportunity outside of government to take your talent, your expertise, your knowledge, and probably make a lot more money with a lot less stress."

In the past several days, a few media outlets linked the Biden administration's plan to cut carbon emissions to the idea of reducing red meat consumption. Vilsack told agriculture reporters there is no merit to the reports.

"There is no effort designed to limit people's intake of beef coming out of President Biden's White House or coming out of the USDA," he said.

"I mean sometimes folks, you know, in the political world games get played, and issues are injected into the conversation, knowing full well that there's not a factual basis for the issue, but also knowing that somebody is going to pick it up and somebody is going to ask about it and all of a sudden becomes an issue. There was no desire, no effort, no press release, no policy paper, none of that, that would support the notion that the Biden administration is going to suggest that people eat less meat, or that the USDA has some program that's designed to reduce meat consumption, it's just simply not the case."

Todd Neeley can be reached at: todd.neeley@dtn.com 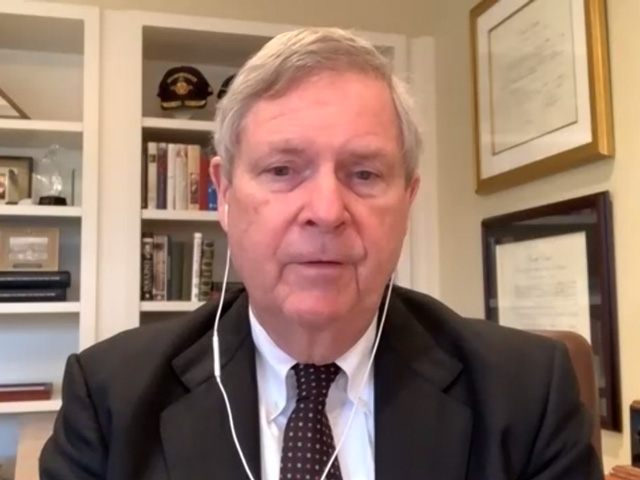