ROCKVILLE, Md. (DTN) -- For the first time in many years, corn growers will have a new rootworm mode of action available to them next spring -- a novel trait found in Bayer's SmartStax Pro hybrids.

The trait, which uses a method called RNA-interference (RNAi), couldn't come at a better time, as many farmers in the Corn Belt are facing mounting rootworm resistance to the current Bt traits on the market, said University of Illinois entomologist Joseph Spencer.

"We may be approaching the end of the road for the Bt traits, so having something else is pretty important," he said.

The trait will get a limited launch in 2022, due to the small amount of seed inventory available initially, Bayer representatives told DTN. Studies across the Corn Belt conducted by Bayer and academic scientists this summer have shown the new hybrids offer better protection than Bt-traited products on average, making it a good fit for rootworm hotspots where Bt-resistance is prominent.

To prolong its efficacy, the company is also stressing best management practices for growers who use it, said Travis Coffman, Bayer's trait marketing manager for corn and regional crops. "Resistance is something that naturally occurs, especially in long-term corn-on-corn fields, which is why we're not only talking about the technology, but also how to manage it, making best management practices part of our program," he said.

Here's a look at how the new RNAi rootworm trait works, how available it will be to farmers in the spring and why some scientists are worried that rootworm resistance to it could crop up quickly.

HOW DOES IT WORK?

If DNA is our genetic blueprint, think of RNA as the builder, reading the blueprint and shouting out directions to the workers. It translates the information stored in DNA to cells, by directing protein production and regulating gene expression.

The new trait in SmartStax Pro hybrids uses a technology called RNA-interference, or RNAi. The corn plant expresses a tiny fragment of rootworm RNA, which carries a doomed set of instructions for the unwitting corn rootworm larva who feed on the roots and ingest it. Once inside the rootworm, the RNA targets a key gene in the rootworm -- DvSnf7, a gene that encodes a "housekeeping protein" that is "essential for life," Bayer's Corn Systems Manager Safeer Hassan said. The RNA hijacks that gene's expression and the protein isn't produced.

This causes the death of the rootworm, but it takes time for this process to unfold, Hassan noted. That means the RNAi trait won't produce an effect as quickly as a Bt toxin, which acts immediately on the gut receptor of a rootworm as soon as it is digested.

"Bt will be the quick kill, and then the RNAi comes in and provides a second punch for the clean-up," as Coffman put it.

That's why even in strip trials showing good efficacy from SmartStax Pro, there is some feeding observed on the roots. Across 40 strip trial locations, run by Bayer and academic scientists, ranging from low to heavy rootworm pressure, the SmartStax Pro hybrids averaged just over a quarter node of injury (on a scale of 0 to 3 nodes of injury). That surpassed the unprotected corn hybrid controls, which saw an average of 1.5 nodes of injury.

It also did better than the strongest Bt pyramided traits on the market, which are largely leaning on a single Bt protein, Cry34/35Ab1 (Herculex RW) to control rootworm.

AVAILABILITY IN 2022 AND BEYOND

With limited inventory for 2022, Bayer expects to work closely with growers who are facing serious rootworm pressures to place SmartStax Pro strategically on the landscape initially, Coffman said. The trait will be available in maturity groups ranging from 100- to 110-day corn hybrids. By 2023, inventory should ramp up and these hybrids will be more broadly available, Coffman added.

The trait will only be found in Bayer corn seed brands in 2022, but the company expects the new rootworm trait will be available through licensees as early as the 2023 marketing year. (See more on those licensing agreements from DTN here: https://www.dtnpf.com/…)

Expect to hear a lot about stewardship of the trait, Coffman added. The company is stressing best management practices, with a special focus on crop rotation. "Rotate, rotate, rotate," he said. "It breaks the cycle and resets your field." (Keep in mind that some populations of both northern and western corn rootworm can resist rotation: https://www.dtnpf.com/…)

Other options include rotating with pyramided Bt products, and careful scouting to monitor your local rootworm pressure and the need for foliar insecticide applications against adult beetles, Coffman said. (To learn about a new public map of rootworm pressures, see this DTN story: https://www.dtnpf.com/…).

Soil insecticides, paired with a non-rootworm traited corn hybrid, are also performing well in Illinois trials, and can be a good option to mix up modes of action, said Nick Seiter, University of Illinois Extension entomologist. In Bayer and university strip trials this year, soil-applied insecticides combined with VT Double Pro hybrids performed roughly as well against rootworm, on average, as Bt pyramided hybrids.

The SmartStax Pro hybrids contain three modes of action against rootworm -- Cry3Bb1, Cry34/35Ab1 and the RNAi trait. But keep in mind that rootworm resistance to the Cry3 proteins (Cry3Bb1, mCry3A and e.Cry3.1Ab) is widespread in most major corn production regions, entomologists cautioned.

"In Illinois, resistance to Cry3Bb1 is pretty well fixed and established throughout the state," said Seiter. Cross resistance among the Cry3 traits means those populations would also be able to survive mCry3A and eCry3.1Ab proteins.

Cry34/35Ab1 is in better shape, but resistance to the trait has been confirmed in several states and is growing, said Spencer, who also works with the Illinois Natural History Survey. He has documented populations in central Illinois where only 50% of the rootworm larvae die after feeding on that trait, and populations from northern Illinois where only 30% die. "So, there is still some efficacy, but it's waning," he warned.

That could put a lot of pressure on the new SmartStax Pro RNAi trait, without many new traits on the horizon to relieve it. Corteva Agriscience has a rootworm trait that uses both RNAi and a new type of rootworm toxin in its pipeline, but it is 6 to 10 years away from commercialization, the company told DTN last fall.

Could resistance to Bayer's RNAi trait develop before then? Definitely, Spencer and Seiter said, especially if growers deploy the trait aggressively on most corn acres in that time.

In an effort to explore this possibility, scientists from Monsanto (now Bayer) were able to generate RNAi-resistant rootworm populations in the laboratory in 2018, with an alarming twist. The surviving rootworms outsmarted the RNAi trait by not absorbing it through their guts, thus making them resistant not only to the new Bayer trait but also any future RNAi traits.

"Now that is just in the lab, and it's hard to know what rootworms in the field might come up with," Spencer said. "But if we get that type of resistance in the field, then a future RNAi trait might not work either." 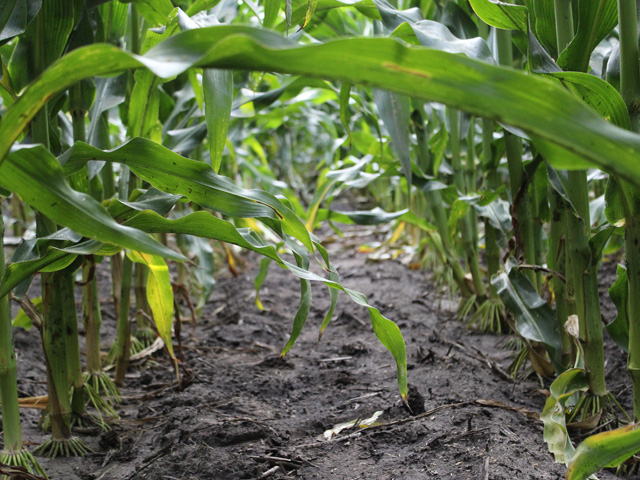