"Populations are pretty low right now," said the University of Illinois entomologist, who works for the Illinois Natural History Survey. Widespread rainfall during rootworm egg hatch in June 2015 led to a major collapse in many Corn Belt rootworm populations.

Spencer is worried the lull in rootworm feeding might lure growers into a feeling of false security. After all, this is a pest that cost the industry up to $2 billion a year at its peak. Moreover, when it does surface in fields, the rootworm is increasingly problematic, Spencer said. It has evolved resistance to all four of the Bt traits on the market that target it, and new technology is still at least a couple of years down the road.

Now, resistance to these three Bt traits is fairly commonplace, Spencer said. "From what I've seen from all the testing over the years, there is very little susceptibility to the Cry3 traits -- Cry3Bb1, mCry3A and eCry3.1Ab," he said. "And, due to cross-resistance, insects that are resistant to one are resistant to all three."

That is a deeply concerning development for corn growers since most pyramided Bt corn hybrids on the market rely on Cry34/35Ab1 for efficacy against the Western corn rootworm, Spencer warned.

"Pyramids with Cry34/35Ab1 are planted over a large area, and a lot of rootworms are exposed to it," he said. "That's putting a lot of pressure on this trait."

"There is more resistance continuing to develop," he added. "When I do bioassaid, I get 20 to 30% survival on this trait, and that's to be expected. Insects have been exposed to this product since 2005."

Growers have been waiting a long time for the next generation of rootworm traits from the industry. So far, the only new mode of action on the horizon is Bayer's SmartStax PRO, which uses RNA-interference technology to target the rootworm, in addition to Bt toxins.

The RNAi trait has made its way through the U.S. regulatory system but remains in limbo as it waits for import approvals from two key export markets, the EU and China, said John Fietsam, Bayer's corn systems lead for North America.

"We're targeting a commercial launch in the U.S. market early in the next decade," Fietsam said. SmartStax PRO hybrids would contain three rootworm traits: Cry3Bb1, Cry34/35Ab1 and the new RNAi trait. They would be sold as 5% Refuge-in-a-Bag products.

"In many places, it's the only trait out there providing protection," he noted. "But, I think a lot of growers are getting good advice now thanks to new rootworm-monitoring programs, and they're thinking twice about using Bt when they don't need it -- and hopefully helping to preserve the efficacy of this Bt trait."

The Many Faces of Corn Rootworm

-- Western corn rootworm (WCR): This is the dominant rootworm species in the Midwest and Great Plains. Adult beetles have a yellow body with black or black-striped wing covers. In addition to Bt-resistant populations, the WCR has one other variant population: Rotation-resistant. This type of WCR has evolved to outsmart the traditional corn-soybean rotation by laying its eggs both in corn and in neighboring fields, usually soybeans. When first-year corn is then planted to those fields, the rootworm eggs are waiting in the soil. Like other Western corn rootworms, this variant's populations have remained low recently, but it has been problematic in parts of Illinois, Indiana, Iowa and other Midwestern states in the past, Spencer noted.

-- Northern corn rootworm (NCR): This was the original native rootworm found in the Midwest, but WCR moved eastward during the mid-20th century and became the dominant Midwest species. As the more cold-hardy rootworm species, NCR has remained abundant in the northern Corn Belt, Spencer said. It may be seeing a resurgence recently, as some reports of NCR surviving in Bt corn fields have been surfacing, he warns. Adult beetles of NCR are smaller than WCR, with wing covers solidly colored and ranging from light tan to pale green.

Like WCR, Northern corn rootworms have one variant that outsmarts crop rotation: Extended diapause. When this type of NCR lays eggs, a certain percentage do not hatch the first year and instead lie dormant through the subsequent soybean crop before hatching in the second year, when a corn crop is planted once again. 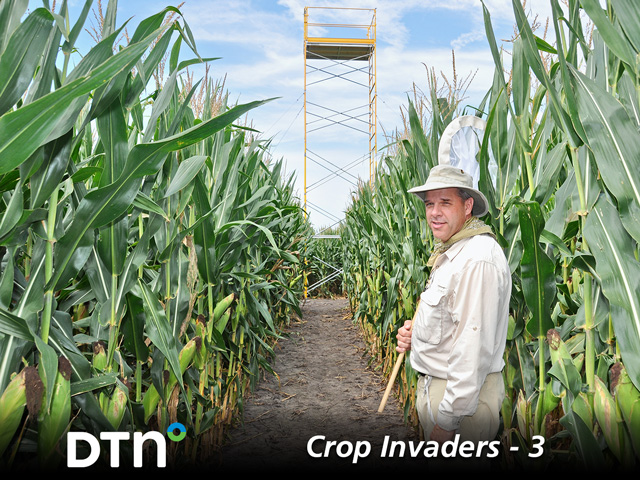