WASHINGTON (DTN) -- Senate Agriculture Committee Chairwoman Debbie Stabenow, D-Mich., and Sen. John Boozman, R-Ark., ranking member on the committee, both told DTN this week that their plans are to write a new farm bill in 2023.

There have been rumors that Republicans don't want to write a new farm bill until after the 2024 presidential election.

But Stabenow said after a hearing Tuesday that the committee is still on track to write the bill in 2023. Stabenow noted that there will be field hearings in her home state of Michigan and in Boozman's home state of Arkansas in the next few months, and after that, there will be title-by-title hearings on the bill.

She was reacting to a statement by Rep. Glenn "GT" Thompson, R-Pa., ranking member on the House Agriculture Committee, Monday that he would not rule out cutting the Supplemental Nutrition Assistance Program (SNAP) due to the "mind-blowing" amounts that the Biden administration has spent on nutrition programs, including the rewrite of the Thrifty Food Plan that led to a 21% increase in SNAP benefits.

Thompson made the statement at a conference sponsored by AgriPulse, the Food and Environment Reporting Network said.

At the same conference, House Agriculture Committee Chairman David Scott, D-Ga., said that proposals to cut the SNAP program could blow up the bill.

"We saw during the past two farm bills that when one party tries to tear apart the farm bill coalition by going too far on trying to reform SNAP, that the farm bill fails," using as examples roll call votes in the House that temporarily derailed the 2014 and 2018 farm bills, FERN said.

In a separate interview, Boozman said he, too, is proceeding on the assumption that the bill will be finished in 2023.

About rumors that Republicans don't want to write the bill until 2025, Boozman said: "I have a say in that. Right now, we are working in good faith to get a farm bill that is good for rural America. I'd very much like to do it in 2023."

Boozman said it is important to write the farm bill on time because it gives farm families "stability" and "it is better for rural America and the country."

Boozman said he had teased former Senate Agriculture Committee Chairman Pat Roberts, R-Kan., that he wants a vote bigger than the historic 87-to-13 Roberts and Stabenow got for the 2018 farm bill conference report.

Of the concerns that Republicans want to cut nutrition spending, Boozman said, "I haven't heard there is any effort to do that." Families are "in need" of both nutrition benefits and job opportunities, he said. 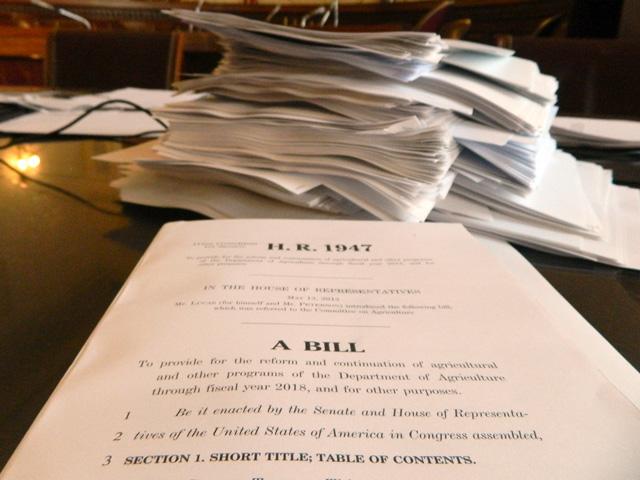