WASHINGTON (DTN) -- In a three-hour, wide-ranging hearing, U.S. Agriculture Secretary Tom Vilsack told the House Agriculture Appropriations Subcommittee on Wednesday that USDA will end the Farmers to Families Food Box Program established by the Trump administration. However, USDA will continue to distribute the produce and dairy products that became popular with food banks and other beneficiaries.

A year after USDA started the Farmers to Families Food Boxes, USDA now will shut down the program by the end of May.

Vilsack said USDA's information gathering on the program had shown it had "significant administrative costs and inadequate accounting of where the boxes were delivered" but that he wants to incorporate the best of that program into traditional food distribution programs.

USDA first launched the food boxes April 17 of last year and quickly announced the department would purchase up to $3 billion in commodities in the first round of the program. USDA then added another $1 billion in funding for the program later in 2020.

The program ended up distributing 157.1 million boxes of fruits and vegetables, dairy products and cooked meats through food pantries, food banks, churches and other charities around the country. Throughout the past year, there was high demand for the boxes with food banks often having long lines of automobiles waiting for food deliveries.

"We are going to continue to provide healthy food through the most efficient system we have," Vilsack told Rep. David Valadao, R-Calif., who asked why USDA was canceling the food box program.

The United Fresh Produce Association said it "appreciates that USDA is including fresh produce boxes in the TEFAP program but strongly urges that a new produce box program be developed as part of a fundamental realignment of USDA feeding programs."

United Fresh noted that USDA recently concluded its public listening session and comment period on the future of the food box program in which United Fresh's 80-member working group on the produce box program submitted 30 recommendations to USDA on ways to best implement the program for the future.

The food boxes were a lifeline for the dairy industry as well. Jim Mulhern, president and CEO of the National Milk Producers Federation, said the program was very helpful for the dairy industry in responding to supply chain disruptions and the rise of Americans facing food insecurity. But the program also had its challenges, which is why it is not a surprise USDA is ending it.

"The important focus now is addressing the twin needs of assisting food insecure families and aiding food supply chains like dairy that are still dealing with the effects of reduced foodservice demand," Mulhern said. "We support USDA's efforts to use multiple programs, including TEFAP, Section 32, the new dairy donation program and other efforts to purchase dairy products, produce, meat and other products for distribution through food banks and other charitable organizations in the most efficient and effective ways. This will help farmers do what they do best: Serve people who benefit from the nutrition they provide."

At the hearing, Rep. Sanford Bishop, D-Ga., subcommittee chairman, noted that the budget release from the White House last week was "bare outlines of the budget" and asked Vilsack to present his vision for running the department a second time.

Vilsack repeated previous statements that he wants to focus on four big ideas:

-- The notion that climate change, while an existential threat, presents an opportunity to bring profitability back to agriculture.

-- Recognizing that farm profitability is an important part of sustainability and resilience.

Rep. Jeff Fortenberry, R-Neb., subcommittee ranking member, told Vilsack he wants to move the discussion about broadband from wiring communities to "an ecosystem of livability" in which people know how to use telehealth, distance learning and e-commerce.

Fortenberry noted that USDA Inspector General Phyllis Fong told the subcommittee that she did not know what the metrics of success on broadband should be. Fortenberry told Vilsack he is concerned about people knowing how to use broadband, and Vilsack said he wants to make sure that broadband speeds are as fast as needed.

Fortenberry said the public is fatigued with political infighting and said Congress and the administration should work together to get some things done.

"Our world is screaming for meaning," Fortenberry added. "I don't believe anything should be thrown away."

Fortenberry also noted that Microsoft founder Bill Gates recently said that wealthy countries need to move toward 100% synthetic meat and asked Vilsack if he agreed with that statement.

Vilsack said he agreed with Gates that farmers are great stewards and that emerging technologies cannot be banned, because competitors will take them up.

House Appropriations Committee Chairwoman Rosa DeLauro, D-Conn., questioned whether JBS, a Brazilian-owned meat producer with an American subsidiary, should be eligible for aid because it has been involved in corruption cases. Vilsack said the federal government needs to examine its procurement policies to make sure they are supportive of American values. He added that the Packers and Stockyards Act needs to be enforced and that more meat plants should be built.

House Appropriations Committee ranking member Kay Granger, R-Texas, questioned about U.S. dependence on farm exports to China. Vilsack said that, as CEO of the U.S. Dairy Export Council, he learned that the United States needs more "people on the ground" to analyze and appreciate markets, partnerships between commodity groups and universities to create products that use U.S. ingredients and telling the story of U.S. food safety and product quality.

Vilsack also told Granger that sign-ups for USDA programs are at the same level as in pre-pandemic times. Local Farm Service Agency (FSA) offices have gotten flexibility on opening offices with more than 25% of employees present, although only those who want to go to the office under those conditions are required to do so.

After Rep. Chellie Pingree, D-Maine, urged Vilsack to finalize the organic livestock and poultry rule, he said he wants to move forward quickly, but questions have been raised about the economic analysis of the poultry section and that it will be necessary to start from scratch on that.

When Rep. Andy Harris, R-Md., noted that the American Farm Bureau Federation is concerned about changes to the estate tax, including stepped-up basis, Vilsack said concern about those issues requires understanding the details of the situation and that estate taxes are not likely to apply to many farms. But he added that he would make sure Treasury Department officials know of the farmers' concerns.

Harris, a physician, noted that physicians are urging that rules on what people can buy with the Supplemental Nutrition Assistance Program (SNAP) benefits and suggest that the SNAP rules be aligned with the rules under the Special Nutrition Program for Women, Infants and Children (WIC), which has nutritional standards.

The exchange with Harris also resulted in a display of the differences between Republicans and Democrats about the programs to provide aid to farmers of color.

Harris said his constituents believe that "USDA was color blind, but now it is color-preferenced and part of a woke agenda." USDA has a reputation as a nonpolitical agency and should stay that way, Harris said.

Bishop asked Vilsack to explain how the Biden administration's USDA Equity Commission will be established. Vilsack said that the commission will be established under the Federal Advisory Committee Act and that the committee will be composed of outside experts. He also explained that Black farmers' lack of access to farm subsidies and farm programs when white farmers had them had long-term implications. 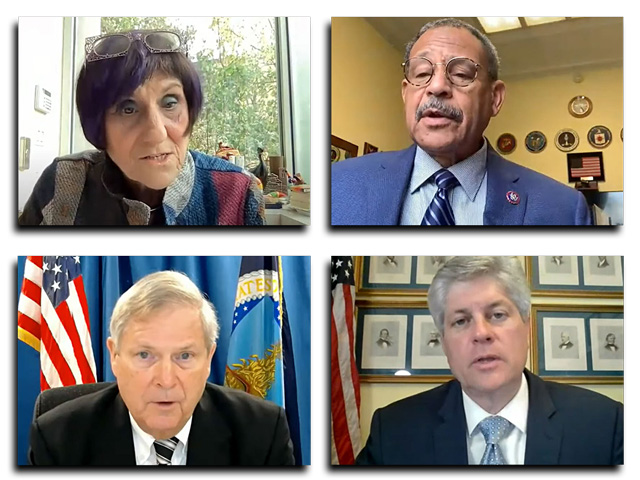