OMAHA (DTN) -- Philip J. "PJ" Haynie, a fifth-generation Black farmer from Virginia, told members of Congress on Thursday about his first experience trying to work with USDA when his dad took him to try to get a farm loan at the local Farm Service Agency office.

"On a trip to the local FSA office to inquire about a beginning loan for my farm, a county executive director brandished a loaded handgun and told me that I did not need to get involved in farming and to go out and get a job," Haynie said.

Representing the National Black Growers Council, Haynie was among a handful of advocates for Black farmers who testified before the House Agriculture Committee about their experiences with discrimination at USDA. Much of the hearing focused on roughly $4 billion in loan forgiveness provided to socially disadvantaged farmers in the American Rescue Plan that passed Congress earlier this month.

"This festering wound on the soul of American agriculture must be healed," Scott said.

As DTN has highlighted, all FSA debt for socially disadvantaged farmers as of Dec. 31, 2020, shows current loans at $2.67 billion on the books, along with the $414.9 million in delinquent debt, reaching $3.1 billion in outstanding loans for socially disadvantaged farmers. With the extra 20% added in for tax liability, which comes to about $3.7 billion. https://www.dtnpf.com/…

Agriculture Secretary Tom Vilsack said dealing with the direct loans is "relatively straightforward" and will be done in a tiered situation "as quickly as possible." The loans will be paid off and 20% will go to the farmer "for the purpose of paying the tax."

Farmers will have to consider tax consequences, and Vilsack said loan forgiveness might be better to divide over multiple years to minimize tax liability. That's where some of the funds for outreach and technical advice will come into play, he said.

Regarding guaranteed loans, USDA sent a letter to banks on Thursday to take no further action on any foreclosures on farmers. USDA will be working to get the loans paid off. In some instances, there may be issues of prepayment penalties USDA will have to address with the banks. Some further complications come up because banks also likely have sold the loans "which makes a bit of a complication," Vilsack said.

Rep. Glenn "GT" Thompson, R-Pa., ranking member of the committee, said the hearing provided a chance to ask questions regarding why discrimination at USDA "has gone on for far too long." He noted, though, that the American Rescue Plan and the aid to minority farmers was done without Republican backing or input. Thompson questioned why accountability on racial discrimination was delayed until now. "How did USDA leadership fail so spectacularly to allow this ongoing discrimination for so many years?" Thompson added, "Paying off the loans of disadvantaged farmers may help in the short term, but it does very little to address the root cause of this issue."

Looking back to two settlements with Black farmers in the early 2000s known as the Pigford court cases, John Boyd Jr., founder and president of the National Black Farmers Association, said the Pigford settlements failed to address many of the issues that were actually part of the litigation, including debt write-down. Boyd stressed the need for transparency in farm subsidies, in terms of the race of recipients. He also called on Vilsack to publicly declare the importance of minority farmers to agriculture as a whole.

"Mr. Secretary, Black farmers need to hear from you that USDA is open for business for Black farmers, open for business to farmers of color, Native Americans, women," Boyd said. "Make that announcement and make it with conviction because we're going to have to get Black farmers reintegrated into USDA because Black farmers don't trust the U.S. Department of Agriculture, which has really hurt us in participation, and it's because of all of the discrimination that I and others have faced."

Shirley Sherrod -- once fired by Vilsack over a speech taken out of context by conservative media -- is now executive direct of the Southwest Georgia Project for Community Education. Sherrod told lawmakers there has been some change in USDA's culture, "But not nearly enough to make up for what's been done," she said. A lot of Black farmers refuse to go to USDA for aid because they have been turned away so many times. "The culture there has been changing some -- because I have been at this for 50-some years -- but I haven't seen enough change."

Vilsack is setting up an equity commission to help address some of the systemic barriers at USDA. He also told lawmakers there is an opportunity for other federal departments to work on these challenges. He pointed to large amounts of land outside of U.S. military bases. "Where and who do they have farming that land? Can that be something that could potentially be made available to minority and socially disadvantaged and beginning farmers? That's one thing Congress could ask."

"Part of what you have done is create a better sense of balance in the COVID-relief efforts," he said.

Haynie noted smaller farmers, in general, were disadvantaged early in CFAP aid because it provided funds to farmers who had grain in storage from the 2019-20 crop year.

"The larger farmers had grain storage capacity that a lot of small farmers didn't have," Haynie said. "So, if you didn't have grain stored in your bins, you were unable to benefit. A lot of Black farmers had to sell their grain from the fall of the year and weren't privileged to the storage benefit."

Sherrod, Boyd, Haynie and others also stressed there is a need for more diversity within the USDA workforce at agencies such as the Natural Resources Conservation Service "who can relate to the constituents they serve. More African American and Latino representatives from NRCS who can go and relate to these communities," Haynie said.

Boyd also made a point that barriers need to be taken down in programs such as USDA beginning farmer aid. More effort is needed to get beginning farmers into aid programs. Boyd said one major barrier that should be removed is the requirement that farmers must have participated in the business of a farm for at least three years out of the last 10 years to apply for a direct farm ownership loan at FSA. Boyd said that three-year requirement should be removed.

Sedrick Rowe, a first-generation farmer from Albany, Georgia, testified he had been unable to apply for beginning farmer loans and micro-loan programs. Red flags at USDA continue to crop up. In his experience, little or nothing has changed.

"I'm giving them all of their information about my life just to tell me no again," Rowe said. He added, "They will tell you I qualify for it, but when I get there, it's a whole other story."

Yet some members of the committee countered that the new aid specifically for minority farmers is discriminatory itself. Rep. Scott DesJarlais, R-Tenn., said farmers of "every race, color, national origin, gender and religion" need aid to recover from the pandemic. He noted the FSA loan provision would provide debt relief to "foreign nationals" but not "white women."

DesJarlais added, "It's hard for me to tell them there's help on the way but only if you are of a certain skin color." 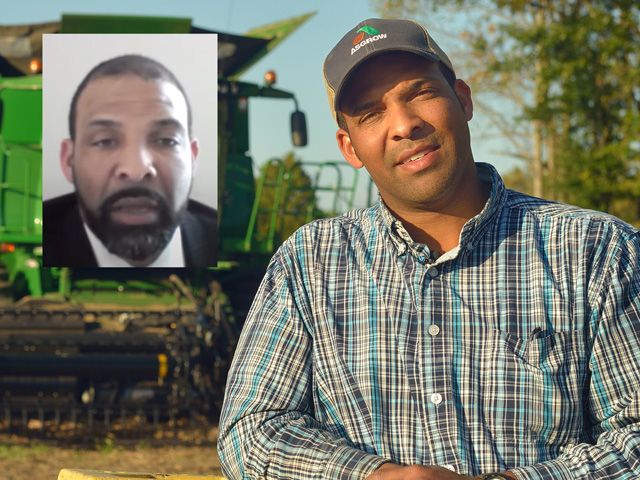