OMAHA (DTN) -- When the U.S. Bureau of Reclamation announced farmers would receive just a fraction of the water they normally do in the Klamath Irrigation Project in southern Oregon, Malin, Oregon, potato farmer Tricia Hill and her family began to scramble.

Like many farm families in the Klamath River Basin facing severe drought, the 15,000-acre J&W Walker Farms had many thousands of dollars of seed and other inputs already in the ground.

Surface water is a must for potatoes.

"Thought we could rely on surface water," she said.

"We had one field we were in the middle of farming and we stopped. Right now, one of our challenges is we have a lot of potatoes and no surface water. We're going to supplement with well water, but with no surface water it makes frost nights a lot higher risk for us."

With millions of dollars of seed and other inputs already in the ground across the Klamath Basin, farmers may face a mid-summer water shutoff as the bureau juggles the needs of farmers with those of three endangered fish species.

The Klamath River Basin comprises about 10 million acres, 200,000 of which are irrigated land in the Klamath project.

Water users in the project, including the Yurok Tribe and wildlife interests, need about 400,000-acre feet of water to meet all of the needs. This also includes protecting three endangered fish species.

"After they changed the allocation, we looked at how long we'll be able to last and the yields expected," Hill said.

"A lot of fields were deserted with $1,000 per acre in inputs. Some will carry over until next year. At this point in time we hope we have enough water and will lose a lot less money."

The project was developed by the bureau through the 1902 Reclamation Act and maintains some operational and oversight responsibilities for delivery of project water via irrigation districts to farmers.

Water supplies have been under threat by Endangered Species Act protection of the short-nosed and Lost River sucker fish, and the coho salmon in the Klamath River. The bureau is required to maintain adequate water flows for the species.

The U.S. District Court for the Northern District of California in San Francisco recently denied an emergency motion filed by the Yurok Tribe and environmental groups under the ESA. The groups asked the court for a temporary restraining order to prevent the bureau from cutting releases this year, for fear the endangered fish would suffer.

Both sides agreed to a stay in March 2020 after the bureau agreed to an interim operating plan for the project through September 2022.

"The resulting economic and personal ramifications for local farmers and the community could be worse than 2001," said Dan Keppen, executive director of the Family Farm Alliance in Klamath Falls, Oregon.

"The family farms and ranches in the Klamath project face unimaginable hardship. This year may be the worst ever for Klamath project producers. They are saddled with a severe lack of irrigation water, incredible uncertainty, and COVID-19 impacts on themselves, the workforce and markets."

In 2001, the bureau shut off irrigator access to the Upper Klamath Lake in the project. The lake is home to the sucker fish.

As a result of a court-ordered enforcement of the ESA, hundreds of farmers were left without water in a severe drought and helplessly watched their crops wither and die. Farmers lost money and farms, stress took its toll, and they rallied against a perception that agriculture is unwanted in the region.

USDA officials are aware of the current crisis.

In a May 5, 2020, memorandum sent to Under Secretary for Farm Production and Conservation Bill Northey from U.S. Department of Interior officials, the government said current programs are inadequate to address the scope of the problem.

"Based on this extensive collaborative analysis among local and regional USDA and DOI leads, it has been determined that drought conditions in the Klamath Basin are severe, falling outside the normal range of water supply," the memo said.

"While existing programs address many of the varying needs due to drought nationwide, neither current coverage nor availability are on scale for the degree of diversity and intensity of issues facing the Klamath Basin this year."

On May 29, farmers, ranchers and surrounding communities -- more than 2,200 tractors, semis, trucks and cars -- gathered for a convoy near Merrill, Oregon, at one point stretching 29 miles in solidarity with ag producers.

Organizers called it the "Shut Down and Fed Up Taking a Stand for Ag," which also included a rally designed to raise awareness among decision makers. https://shutdownfedup.org/…

"It is going to be a disaster this year," said Bob Gasser, co-founder of Basin Fertilizer and Chemical Company in Merrill, Oregon, and organizer of the event.

"A lot of crops won't get one drop of water. I know quite a few growers had inputs in the fields and walked away. If there's a cut it's never to the river or lake, always to refuges and farming. What's really frustrating to us is this is one of the most efficient projects in the world and for what reason? Is not just farming. You're hurting everybody here."

Farmers and ranchers in the region have a history of political activism.

On April 7, 2001, the bureau allocated all water to benefit endangered fish in the basin.

One month later, more than 20,000 farmers and ranchers rallied in Klamath Falls to protest the bureau's decision to shut off irrigation water.

"This has not gained one fish, but we keep adding water to the (Upper Klamath) lake," Gasser said.

"It is killing sucker fish and the farm economy. Every year it's a failure. They keep taking water from the project. They can't show us where it has saved one sucker fish or salmon. More water does not equal more fish."

All basin interests hammered out an agreement to secure agriculture's future while focusing on environmental restoration.

The agreement was abandoned in April 2016 as Congress didn't approve it.

"I believe many people would agree that it is desirable to get back to that kind of approach, but of course perspectives and incentives are not identical today to what they were when the previous settlement was negotiated," said Paul Simmons, an attorney and executive director of the Klamath Water Users Association.

"Looking at the Klamath project specifically, there is a big and too-familiar problem, which is that the regulatory approach to endangered species in the basin is dominated by reallocating Klamath project irrigation water. This has not helped the species, but it has damaged rural communities. We need a broader philosophy."

While producers and communities are likely to be hit hard this year, Simmons said there could be long-term ramifications.

"For example, if a grower loses a hard-earned contract to deliver potatoes or onions or any crop because he or she was not able to deliver, that contract may not ever come back," he said.

As a result of the failed agreement in 2016, Hill said some young farmers left the business and all interests in the basin have "retreated" to their corners.

"The saddest thing is everyone knows it's not working," she said.

"We need something different. I hope we'll get there someday. This year is tough. Emotions are pretty high. Probably the hardest thing is we are a small community. Local businesses depend on farmers spending money."

The Yurok Tribe and the U.S. Bureau of Reclamation did not respond to DTN's request for comment. 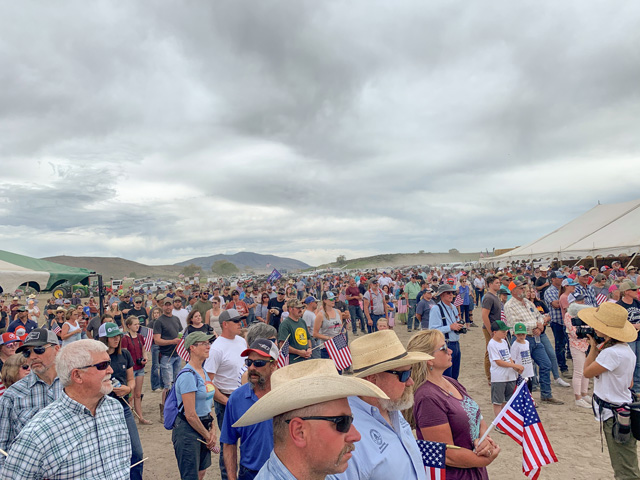