OMAHA (DTN) -- Southwest Minnesota cattle producer Peter Bakken has seen prices for his beef collapse under the weight of COVID-19.

The COVID-19 pain is being felt across all segments of the industry. From dairy farmers being forced to dump milk in fields, to ranchers taking big hits from falling beef prices, to corn, cotton and soybean futures tumbling, to ethanol plants being idled -- the industry is looking for help.

Reuters reported on Friday that biofuels industry groups have asked the Credit Commodity Corporation for a bailout.

The pain is being felt far and wide.

Bakken said he, like some others in the industry, is questioning the future of his farm.

"Where we're at right now -- four generations of work to keep the operation going -- and this is a management nightmare," he said during an American Farm Bureau Federation press call on Friday.

"We're looking at the potential of having to recover from a million-dollar loss."

The $2.2 trillion CARES Act stimulus law provides $9.5 billion to U.S. Secretary of Agriculture Sonny Perdue to provide financial support to farmers and ranchers, as well as $14 billion for the Commodity Credit Corporation.

Zippy Duvall, president of the American Farm Bureau, said on Friday's call that even though there is a combined $23.5 billion in the CARES Act for agriculture, "We're going to find out very quickly that amount of money is not going to sustain our farmers through this difficult time."

Duvall added that Secretary of Agriculture Sonny Perdue had asked for more aid than Congress approved.

Questions also remain about the Small Business Administration and whether the agency is following congressional intent regarding treatment of farmers and the SBA Economic Injury Disaster Loan (EIDL) program, which was modified in the CARES Act.

"We are not telling famers to go to their community banks," he said. "We're trying to get clarity from SBA on this. We don't have 100% clarity on this issue just yet."

In addition, Schlegel said AFBF is working with state organizations to figure out the best ways to help growers as much as possible when it comes to the available funds.

"There is an immediate need out there," he said. "This is a fluid situation, and we're learning as we go as to what the needs are."

Although beef retail prices have been rising and grocery store shelves emptying during the crisis from higher demand, AFBF said the price farmers receive has fallen 25%.

As ethanol plants across the country have been slowing and shutting down production, cattle producers continue to watch feed availability closely.

Bakken said several plants in his region have closed operations.

"The plant I get feed from is still operating," he said, but is concerned about having that supply of dried distillers grains shut off as well.

When it comes to dairy, Twitter has been replete with videos and photos of producers dumping milk in fields because of an oversupplied market.

COVID-19 disrupted supply chains and led to a drop in milk prices by 26% to 36%, according to AFBF.

In addition, Reed said his farm is seeing little customer traffic in its dairy stores.

"It's puzzling we have a product and no place to go with it," he said. "Hopefully, that will turn around at some point."

Florida vegetable farmer James Alderman said, because food services have closed down, it also has created an oversupply of some of his commodities.

Alderman operates a 1,200-acre mostly organic veggie farm in Palm Beach County. Though he said he continues to have a "decent" retail business, the loss of food services is forcing him to throw produce away.

For instance, in 85-degree temperatures, his farm is picking squash and leaving it on the ground because the price received is far below the costs of production.

"It looks a little bleak in that arena," he said. "We have no market for the product, prices are down 100% or more from a couple of weeks ago. We're in a bad situation. This is something that nobody has ever seen." 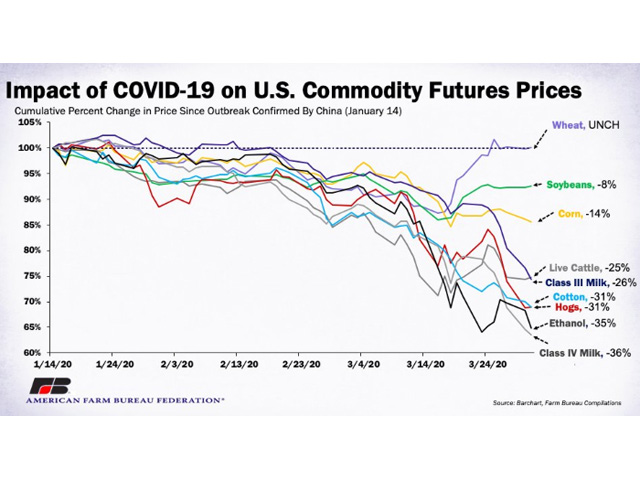