SAVANNAH, Ga. (DTN) -- A rule to implement the 2018 farm bill "heirs' property" provision to help farmers who have inherited land but don't have clear title or right to Agriculture Department and disaster programs is now at the White House Office of Management and Budget, a key Agriculture Department official said here this week.

The rule will probably be released later this year and will be subject to a 90-day comment period, Latrice Hill, national director for outreach at the USDA Farm Service Agency, said at a National Farmers Union session this week on the heirs' property issue.

Monica Rainge, director of land retention and advocacy at the Federation of Southern Cooperatives/Land Assistance Fund, said the problem arises when a farmer dies without a will or succession plan and his children inherit the land as tenants in common.

Land has often been passed down within black families like this for generations, adding more heirs to the ground over time. The owners can use the land together as long as they are in agreement, but no one has clear ownership rights, and the owners are hindered accessing USDA programs and face barriers raising capital, Rainge said.

"Every week, I talk to families who have land sitting idle," Rainge said. "At the end of the day, a farmer has to be able to leverage their land."

However, about 60% of African-American farmers operate on ground that has been passed down through generations as heirs' property. That is "both a blessing and a curse for many of these farmers," Rainge said. A major problem with heirs' ground is that since the title is not secure, those farmers cannot use the land as collateral for loans.

"For most farmers, land is the biggest asset on the balance sheet," Rainge said.

Rainge said the problem of heirs' property is most prominent among African-Americans because they are less likely to have a will or a succession plan or the money to pay for legal services. Across the South, there are 1.6 million acres in heirs' property "that potentially will be lost or underutilized," Rainge said.

The risk of heirs' property is that families have seen land sold out from under them. Under some state laws, a single heir can lead to the entire property being put up for a courthouse auction. In response to more attention being brought to bear, at least 13 states have passed legislation ensuring that all heirs are notified of a sale, property has to be appraised and heirs can have rights of first refusal to buy the land.

"That alone has been a game changer, and it has decelerated the number of forced farm sales we were seeing with heirs' property," Rainge said.

There are still states, however, where developers and speculators are still aggressively trying to take over heirs' property, Rainge said, including some Southern states such as Florida, Mississippi, North Carolina and Virginia with a high number of farmers that are on heirs property.

"Really, the swatch across the black belt is still the most vulnerable because that's where much of the land loss is occurring," she said.

Another significant problem for farmers on heirs' property is that they have historically been shut out of nearly every USDA program, including disaster assistance, Rainge said.

"When you can't show proof of clear title, you are not eligible for many of those programs," she said.

Hill noted that the problem of "land fractionation" is also an issue in Appalachia and on tribal lands. Hill also said the 2018 farm bill included a program under which FSA will provide money to intermediary organizations to make loans to people to get their titles cleared. She said the farm bill also included a provision to allow the owners of the land in heirs' property to be eligible for disaster payments.

Rainge and Hill both said that resolving heirs' property issues is vital to helping beginning farmers gain access to land. Rainge said the farm bill will help families that may have the right of first refusal to keep the land but don't have the resources to buy it without loan support through the farm bill. USDA has received a $5 million appropriation for such loans.

Cornelius Blanding, executive director of the Federation of Southern Cooperatives/Land Assistance Fund, pointed out that farm families must deal with state governments regarding land ownership issues. He also noted that black farmers had started co-ops early in the 20th century because they could not get proper services or even buy gas from white-owned businesses. Black farmers and landowners were also evicted from their homes in the 1960s simply because they registered to vote. The farmers formed cooperatives "out of necessity," Blanding said.

Blanding urged the National Farmers Union delegates to pay attention to the issues of black farmers. 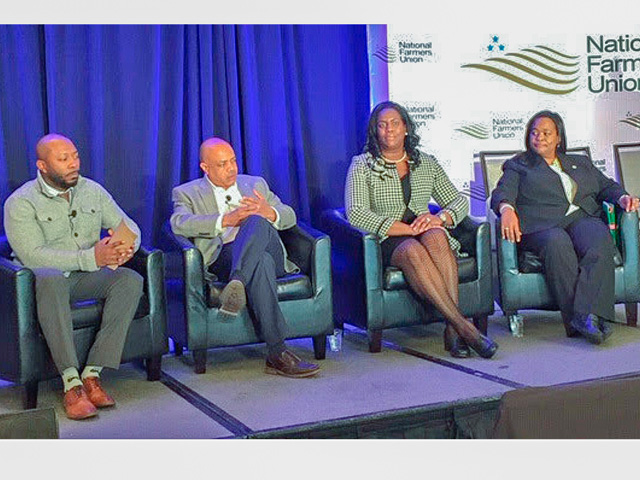