OMAHA (DTN) -- Painting himself as a president who has brought the country back from the brink of failure to unprecedented economic strength and respect, President Donald Trump in his State of the Union Speech Tuesday evening stressed that he has led the country into a new era of prosperity in his first term in office.

Knowing his impeachment trial is about to end with acquittal as early as Wednesday, Trump said the country has seen "the great American comeback" since he became president three years ago, and "the years of economic decay are over."

Trump added, "Our country is thriving and highly respected again."

The president said "the mentality of American decline" has been replaced. "We are moving forward at a pace that was unimaginable just a short time ago, and we are never, ever going back," he said.

ECONOMY 'BEST IT'S EVER BEEN'

The economy is the best it's ever been, Trump said, and he stressed, "The state of our union is stronger than ever before."

In the midst of an impeachment trial expected to end in the president's acquittal on Wednesday, congressional Republicans who have stood by the president ensured his statements over nearly 80 minutes garnered frequent and loud applause.

And, as his speech continued, the president sought to spotlight his economic and regulatory wins while criticizing Democratic policy agendas and policies. He highlighted the "radical left" on health care policy and criticized "radical politicians" who have provided sanctuary for "criminal illegal aliens."

Trump highlighted the replacement of the North American Free Trade Agreement. The president said other politicians had wanted to replace NAFTA, "only to do absolutely nothing. But unlike so many who came before me, I keep my promises. Six days ago, I replaced NAFTA and signed the brand new U.S.-Mexico-Canada Agreement into law."

Trump added USMCA will "massively boost exports for our farmers, ranchers and factory workers. It will also bring trade with Mexico and Canada to a much higher degree, but also to a much greater level of fairness and reciprocity."

The trade deal is projected to boost agricultural exports by about $2.2 billion, or about 1.6%. Dairy, poultry and wheat exports to Canada are all expected to rise.

Beyond USMCA, Trump also spotlighted the phase-one trade deal with China. The deal is expected to lead to at least $40 billion a year in agricultural exports to China, though analysts have questioned the practicality of that. Still, the president said the trade deal would "defend our workers, protect our intellectual property, bring billions of dollars into our treasury, and open vast new markets for products made and grown right here in the USA."

Trump said China now "respects what we have done because, quite frankly, they could never believe what they were able to get away with year after year, decade after decade, without someone in our country stepping up and saying, that's enough."

The president also highlighted his deregulatory agenda, tax cuts and "fair and reciprocal trade agreements." He said the U.S. has become the world's top producer of oil and natural gas.

The president also pointed to the country's 3.5% unemployment rate and more than 7 million jobs created. He also stressed the unemployment rates of Latinos, African Americans and women as among the lowest ever recorded. Trump also highlighted that fewer people are on food aid and 10 million had been removed from welfare.

Seeking to highlight that his agenda has helped lower-income Americans, Trump also emphasized that the bottom half of U.S. households had seen their net worth grow by 47% "more than three times faster than the top 1%," the president said.

"This is a blue-collar boom," Trump said.

Trump said his administration is building "the world's most prosperous and inclusive society -- one where every citizen can join in America's unparalleled success, and where every community can take part in America's extraordinary rise."

In laying out an agenda, Trump also called on Congress to pass a highway infrastructure bill introduced by Sen. John Barrasso, R-Wyo. Barrasso's bill would spend $287 billion over five years on roadways and help increase and speed up the construction of infrastructure projects. Trump said the bill was needed "to invest in new roads, bridges, and tunnels across the land." He added, "I am also committed to ensuring that every citizen can have access to high-speed internet, including, and especially in, rural America."

The president also talked in detail about expanding options for school choice, saying he wants Congress to pass a "freedom scholarships" bill that would allow 1 million students to go to a different school, other than a "failing government school."

The president also focused on health care, saying American families deserve "the most affordable, innovative, and high-quality health care system on earth." The president said his changes to insurance plans are 60% less expensive than insurance premiums that had doubled in the prior five years before he took office. The president added, "We will always protect patients with preexisting conditions."

Trump then took a shot at Democrats who are touting Medicare-for-all on the campaign trail, and he noted 132 members of Congress had endorsed such legislation. The president pushed back on that. "To those watching at home tonight, I want you to know, we will never let socialism destroy American healthcare," Trump said.

The president also hit Democrats on immigration, speaking about violent deaths caused by illegal immigrants who had been released in states such as California and New York. Trump called on Congress to pass a bill that would allow Americans to sue cities and states that have "sanctuary" policies for illegal immigrants. The United States of America should be a sanctuary for law-abiding Americans -- not criminal aliens, Trump said.

The White House put out brief details on the president's immigration policy to replace a "randomized system of legal immigration with one based on skill and merit."

He also touched briefly on the coronavirus hitting China, saying the U.S. is working closely with Chinese officials on the outbreak. "My administration will take all necessary steps to safeguard our citizens from this threat."

Trump sought to end his speech on a high note, saying the country was carved out of the frontier and settled, in a reference to the days of Manifest Destiny, and stressed American exceptionalism, which the president said is becoming, "greater than ever before."

Trump added, "Our spirit is still young; the sun is still rising; God's grace is still shining; and, my fellow Americans, the best is yet to come." 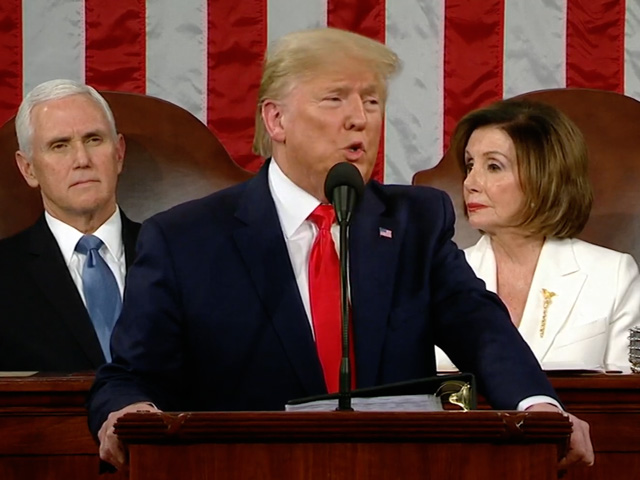