WASHINGTON (DTN) -- While Friday's announcement from China that it would suspend additional tariffs on U.S. pork is a good sign, China should remove the 60% punitive tariff it has placed on U.S. pork to ease its own rising pork prices and move along trade talks with the United States, National Pork Producers Council officials said.

If the Chinese government would do this, "It would help their citizens," who are experiencing rising pork prices due to African swine fever, NPPC President David Herring, a Lillington, North Carolina producer, said at a briefing for reporters Thursday following an NPPC fly-in to Washington.

Early Friday, China announced it will suspend "additional tariffs" on pork, soybeans and other farm goods, Xinhua News Agency reported. Yet it is unclear exactly what level of tariffs Chinese officials committed to suspend, and the Associated Press reported phone calls to Chinese government agencies were not answered Friday because of a national holiday.

"If media reports are accurate, this is a most welcome development," Herring said in a statement Friday.

Tariffs on U.S. pork increased another 10% on Sept. 1, making the retaliatory tariff 60%, tacked on to a traditional 12% duty already in place. That puts the full Chinese tariff on U.S. pork now at 72%. The inability of U.S. producers to export to China is costing pork producers $8 per animal sold, according to Dermot Hayes, an economist at Iowa State University.

With China forced to kill pigs to stop the spread of African swine fever and Chinese production down 50%, U.S. producers should benefit, but the tariffs make U.S. pork too expensive to import, said Nick Giordano, NPPC vice president and counsel for global government affairs.

U.S. pork producers are benefiting from rising world pork prices due to lower Chinese production, but the benefits would be so much greater if the U.S. industry could export to China, he said.

"Our sector is one of those most impacted by the trade disputes," Giordano said.

Removing the tariff on U.S. pork, "Would be viewed favorably by our industry but, more importantly, by the U.S. government," Giordano said.

Instead of exporting higher volumes in a period of Chinese shortages, American producers are watching their competitors in other countries make those sales, he added. Most U.S. competitors only pay a 12% duty selling into China.

China bought 237,800 metric tons of U.S. pork and variety meats from January through July of this year, according to USDA data, a 51% increase from low 2018 sales to China. In terms of volume, China is the second-largest market behind Mexico. Japan remains the top market for U.S. pork in terms of dollar value, while China is third behind Mexico.

Asked whether the fact that the Chinese tariffs are in retaliation for U.S. tariffs means that President Donald Trump should reduce American tariffs to encourage the Chinese to reduce theirs, Giordano said, "We don't always talk publicly about our discussions with the administration. The administration understands that this has taken quite a toll on the industry."

The trade aid package has been welcome but has not made up for producers' losses, the officials said.

Jen Sorenson, an Iowa producer who is a vice president of the council, said that the trade aid has been "positive" because people who have not been able to afford pork now have it.

The officials also called for approval of the U.S.-Mexico-Canada Agreement on trade, and Giordano said he believes Congress will vote on it. 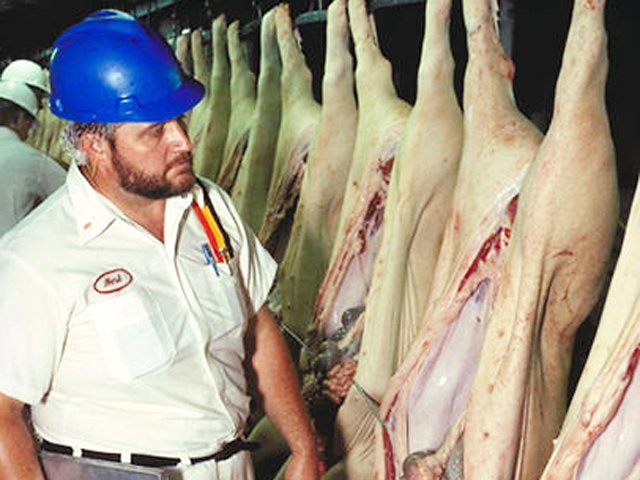