WASHINGTON (DTN) -- Agriculture leaders gathered Friday to celebrate conservation and communicate with consumers, but the differences among farm leaders over conventional and organic farming and the intensity of those feelings were evident at a conference before an exhibit showcasing agriculture was opened on the National Mall.

The conference was held at the Mandarin Oriental Hotel. Heather Hampton-Knodle, a farmer from Illinois serving on a panel, noted that the yogurt offered on the buffet for attendees was organic. She said she would have liked to find a hotel employee to report that she would have preferred to have nonorganic yogurt, and that it would have been cheaper and just as safe.

But Jon Doggett, CEO of the National Corn Growers Association said, "Let's not get wrapped around the axle of organic or nonorganic. It still comes from the farm."

Doggett said food consumers are not the only people who make irrational decisions when making purchases. He noted he had once worked for Allis-Chalmers, and that farmers sometimes said they would not buy the tractors because they were not the right color.

He also noted that his favorite ice cream, Brown Cow, is organic, and that he buys it even though his members grow genetically modified corn.

Hampton-Knodle responded that perhaps the farmers were thinking of resale value when they declined to buy Allis-Chalmers tractors.

Agriculture Undersecretary for Marketing and Regulatory Programs Greg Ibach also said he discourages criticism of some sectors of agriculture because, "We all lose when we create doubt in consumers' minds."

The panel also discussed consumers' interest in conservation and sustainability and communication about those issues.

Dana Bolden, the senior vice president for external affairs and sustainability at Corteva Agriscience, said he believes that consumer trust in food was damaged by "pigheaded" companies and their scientists when they rolled out biotechnology.

Instead of scientists talking to the public, Corteva now has "moms talking to moms," Bolden said.

Hampton-Knodle said farmers' increased specialization has made it harder to communicate even with other farmers. The solution, she said, is to be open and transparent and to encourage scientific literacy.

She also said farmers want to use cover crops to protect the land, but that some landowners object when they see "ungroomed" cover crops, and that dealing with landlords becomes more difficult as one generation dies off and the number of heirs increases.

In Illinois, where 60% of farm land is rented, how landlords regard the way the land is treated is important because "neighbors try to rent ground out from under us," she added.

Craig LeSchack, the interim chief conservation officer at Ducks Unlimited, said his organization works with both farmers and landlords to encourage habitat for wildlife.

Molly Phillips Fogarty, the senior vice president for corporate and government affairs at Nestle U.S., said it is easier for a start-up company to have conversations with consumers, but that big companies can be successful at it too.

"Consumers have a lot of questions," Fogarty said, noting that Nestle products are found in 97% American households. Consumers may not look for information, but they want to know it is available, she added.

Ibach, who was the final speaker, said it is "USDA's responsibility to build trust in food," and that he wanted to use the garden at USDA to show consumers that production agriculture is feeding people "through innovation and technology." He said it was Vroom's idea to use "farmer voices."

Ibach said that when he was director of agriculture in Nebraska, he learned on marketing trips to Europe and Asia that people think that American agriculture "is just big agriculture."

Ibach said Nebraskans had countered that image by, for example, encouraging ranchers on the overseas trips to wear their cowboy hats "to brand Nebraska agriculture." 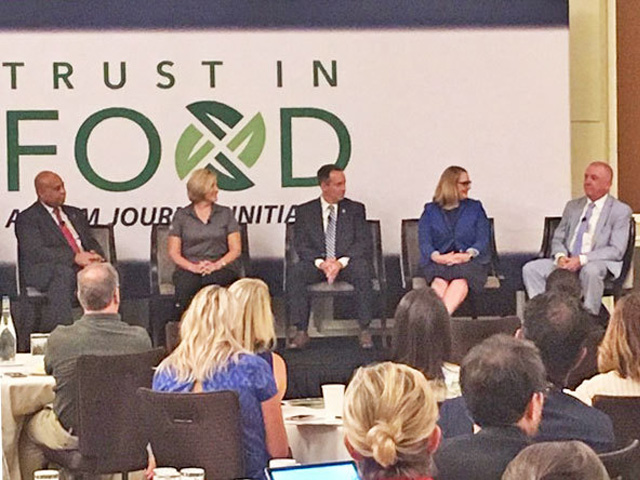