JOHNSTON, Iowa (DTN) -- U.S. Secretary of Agriculture Sonny Perdue said Monday he knows farmers are hurting, but there are no plans to offer additional aid to farmers affected by the trade dispute with China.

Instead, innovation and increased exports will turn around the financial fortunes of farmers, Perdue said.

According to several media reports, White House economic adviser Larry Kudlow told reporters Monday: "We have allocated $12 billion, some such, to farm assistance. And we stand ready to do more if necessary." But Perdue said in Iowa on Monday the administration has no plans to offer additional government payments to farmers to mitigate trade dispute losses beyond the Market Facilitation Program. USDA announced Monday the deadline to certify last year's production to qualify for MFP payments was extended to May 17, from May 1.

However, Perdue said research conducted by companies like Vermeer and Corteva, the agriculture division of DowDuPont, make U.S. farmers the most productive in the world. He added the Trump administration will continue to push for good trade deals to boost demand for farmers' products.

"Farming is tough right now. We can't deny that," Perdue said during a press conference at Corteva. "The president is playing the long game.

"I applaud the president for calling out China because we got biotech issues and non-tariff barriers," he continued. "It's not a level playing field and farmers understand that."

Perdue addressed ongoing China trade negotiations with Iowa political and ag business leaders, including Iowa Gov. Kim Reynolds, and the media. Both countries are reportedly in the final stages of hammering out a deal that would address U.S. concerns like quicker approval of biotech traits, intellectual property theft and force technology transfer as a condition of doing business in the country. An agreement would likely end the trade war and be a boon for U.S. ag exports like soybeans, pork and other products to China.

"They are resilient, tough and American patriots," Perdue said. "But I've told the president several times they can't pay bills with patriotism."

The U.S. Department of Agriculture March farm income forecast predicted net farm income, a broad measure of profits, to increase $6.3 billion from 2018 to $69.4 billion this year. This follows a $12 billion decline forecast for 2018.

May corn and soybeans opened Tuesday at $3.51 and $8.48 per bushel, respectively. Cash corn is just above five-month lows, and soybeans are at the lowest level since November.

Government officials said Congress needs to ratify the pending U.S.-Mexico-Canada Agreement (USMCA) to boost the farm economy, as well as strike new trade deals with China, Japan, the European Union and other nations.

"Gov. Reynolds and I talked about USMCA. We're anxiously awaiting word on it," Perdue said.

Reynolds added, "We need to provide some (trade) predictability and certainty for our farmers, and this would go a long way."

Iowa Secretary of Agriculture Mike Naig said there's no better place to talk about trade and work to remove non-trade barriers than Corteva. Its flagship seed brand is Pioneer.

Perdue and others visited the company's Johnston Global Business Center and Mendel Greenhouse Research Facilities. At about 6.5 acres under glass, it's one of the world's largest greenhouse complexes in the seed industry. Studies are conducted on multiple crops -- corn, soybeans, wheat, canola, etc.

"There's certainly a need to get to a better place with China, as it relates to Corteva with biotech approvals," Naig said. "It's important for the secretary to hear directly from farmers and businesses."

Tour participants heard about the latest seed treatment and gene editing research. For example, Corteva researchers explained how CRISPR technology is being used to make canola more digestible. The CRISPR system performs a specific search within the plant's own DNA -- an organism's complete set of instructions -- to delete, edit or move a gene to achieve a specific characteristic such as drought resistance, disease tolerance or improved nutrition.

"Trendline yields continue to go up because of the basic science that's done in research facilities right here," he added. "It's important to have (it) understood and approved." 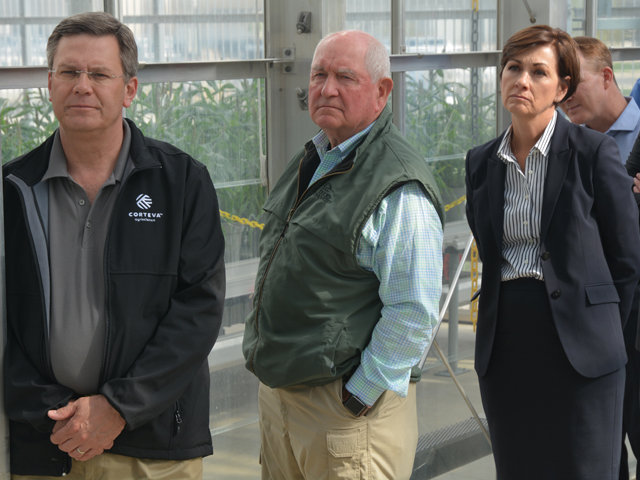