Trump walked away from his meeting with Kim in Vietnam because he decided the terms were not good enough, and the president "won't sign an agreement that can't be enforced," Perdue told reporters after a speech at Commodity Classic, the gathering of more than 4,000 corn, soybean, wheat and sorghum growers and their families here.

Perdue said he believes the agreement with China could double or triple exports for a wide range of U.S. products, including soybeans, rice, beef, ethanol and tree nuts. But he added that Trump wants China to agree to non-tariff items that will make big purchases possible.

Perdue did not get into specifics Friday, but in the past, U.S. officials have said that improvements in China's biotech approval process is a priority, but with agreements on intellectual property and technology transfer that affect all U.S. industry.

A meeting between Trump and Xi has not yet been announced, although there are widespread rumors it will take place at Trump's Mar-a-Lago Club resort in Florida in March.

Perdue also said he hopes that an agreement with China is "imminent," but he also told reporters that farmers may have to plant their crops while the negotiations continue.

Farmers will have to make their decisions "based on market signals," Perdue said, noting that they have always had to make decisions while dealing with uncertainty, and this year those uncertainties may include the relationship with China.

Greeting a crowd that is beset with low commodity prices, incomes that have fallen and questions from bankers as spring planting approaches, Perdue opened his speech by acknowledging that "farming is tough" and that farmers are "burning through" capital they built up during the 2008-to-2013 period when commodity prices were high.

Perdue also alluded to farmers' reputation for complaining even when times are good, as he noted that when he was governor of Georgia, a farmer said he used to "whine," but unfortunately the whine had come true.

Perdue quickly added that he did not want to make light of the situation.

Perdue acknowledged that some of those producers burning through capital are young farmers and said that his message to them is that their fathers and grandfathers had gone through tough times as well. He noted that USDA has direct and guaranteed loans that may be of help to them. The good years had attracted the children of farmers back to the farm, Perdue said, and if they can hang on, "I am bullish on agriculture."

Perdue also declared that the Environmental Protection Agency will issue a rule by June 1 for gas stations for year-round sale of E15, a type of gasoline that contains more ethanol than the E10 that is usually sold. Current rules do not allow its sale in the summer.

Perdue acknowledged that he had misspoken when he said earlier in the week that the rule would not be ready by June 1. Andrew Wheeler, then the acting EPA administrator, told him after the shutdown the agency couldn't get it done by the summer driving season, but with his confirmation pending, EPA found a way, Perdue said. Wheeler got confirmed this week. 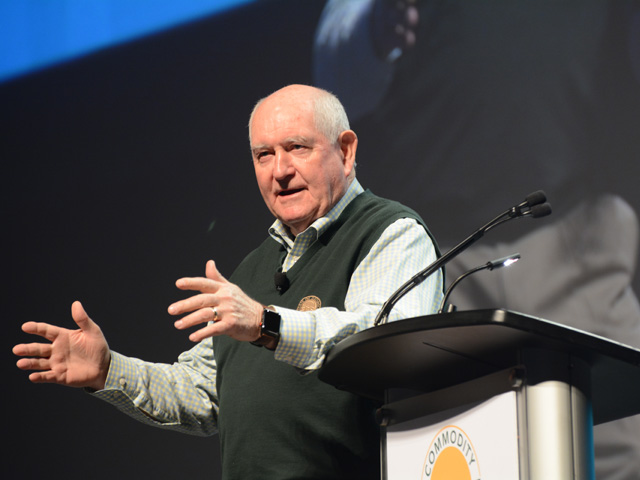