WASHINGTON (DTN) -- CEOs of the three Farm Credit banks and the Farm Credit Council on Wednesday called on Congress and the Trump administration to reopen the government so that farmers can get their financial affairs in order before spring planting.

The officials made their case in a briefing a day after Kansas City Federal Reserve President Esther George said in a speech that, in the Plains, "The farm sector is in a prolonged downturn as a result of declining agricultural prices, made worse by retaliatory tariffs on U.S. farm products."

George, a member of the Fed Open Market Committee, also said it is not "urgent" to raise interest rates further.

In the briefing on farm credit conditions for reporters, Farm Credit Council CEO Todd Van Hoose said that the three days that Farm Service Agency county offices will be open this week and next "will provide a bit of relief" but stressed that "this is the heavy renewal season for agricultural lending. It is important to get those FSA offices open permanently so we can get business done."

Agriculture Secretary Sonny Perdue announced Wednesday that about 2,500 Farm Service Agency workers were recalled to open offices for this Thursday, Friday and Tuesday, Jan. 22, for normal business hours. Offices will not be open Monday, Jan. 21, because of the Dr. Martin Luther King Jr. holiday. The offices will largely help farmers with existing farm loans and provide tax documents such as 1099 forms.

But FSA offices are also important for processing direct loans to farmers and guaranteeing loans made through banks and farm credit institutions.

Van Hoose also noted that the new farm bill increased the size limits on FSA loans, but that those limits can't be changed until USDA, now closed, conducts the rulemaking process.

The officials noted that agriculture operations cannot be closed like a factory because they are conducted outside and that, while planting begins in a couple of months, dairies operate every day of the year.

Farmers and others in agriculture are also not getting the federal reports on which business activity depends, they said.

The three regional officials all said that, while farmers in all parts of the country have been experiencing the impact of lower prices, the circumstances are different region-by-region.

In the Southeast, Heustess said, the major issue has been hurricanes and other problems. She said that farmers are waiting for Congress to pass disaster legislation and need some certainty about when the money will come.

Pecan orchards take seven years before they begin producing a crop, she noted.

In the Midwest, Jensen said, farmers have spent the last four or five years reconciling themselves to the environment of lower commodity prices.

Knisely noted that every farmer's situation is different and that Farm Credit counselors do more than just make bank loans. They also advise farmers on what other actions they must take to remain in business, he said.

All three regional officials said that the conditions are not as bad as they were in the 1980s because the level of debt to assets is not as high, and interest rates are much lower than they were then. The debt-to-asset ratio is only about 15%, and many farmers have long-term loans locked in at only 4%, 5% and 6% rates, one official said.

Van Hoose and the regional officials made the case that Farm Credit is there for farmers in good and bad times, an argument that goes back to the founding of the Farm Credit System in the early 1900s, when farmers often could not get loans from commercial banks.

Remarks by Esther George, president and CEO of the Federal Reserve Bank of Kansas City can be found here: https://www.kansascityfed.org/… 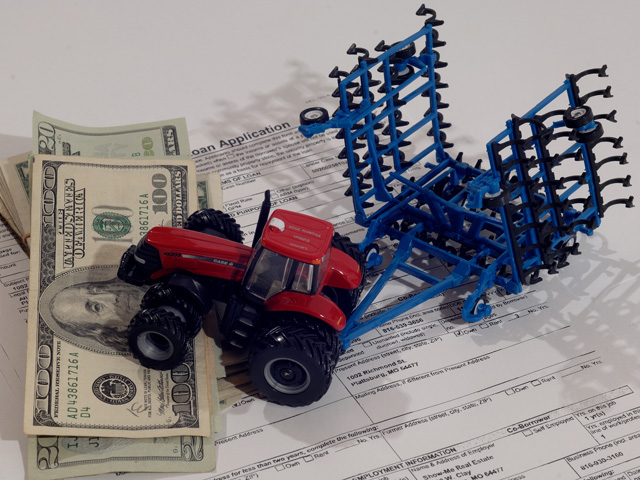