OMAHA (DTN) -- House Agriculture Committee Chairman Michael Conaway said Monday he and other main negotiators on the farm bill are still working through issues with commodity and conservation programs, but lawmakers are intent on getting a new farm bill done before the end of the year.

Conaway, R-Texas, was in Omaha with Rep. Don Bacon, R-Neb., a freshman member of the committee. The two toured an Omaha nonprofit, Whispering Roots, which is building a greenhouse and attached fish farm in northern Omaha as both a commercial enterprise and educational project for urban students.

Conaway, in an interview with DTN afterward, said most farmers he knows well are familiar with the history of delays on the farm bill and confident it will eventually be passed. But he said he recognizes there is a lot of anxiety right now among farmers even if there aren't rallies clamoring for Congress to get a farm bill done now.

"There is a quiet desperation, though, across the entire system," Conaway said, based on low commodity prices. "Farmers are eating up capital, they've borrowed more and bankruptcies are up."

The piece that bothers Conaway is rising suicide rates among local farmers because of financial circumstances.

"It helps drive me to say 'Let's get this done. Let's get this done.' I don't know how much of the anxiety load is trade, commodity prices, but I do know whatever piece of that is the farm bill, we should have gotten that off their backs, and we didn't. And I feel really badly about that. I really want to get it done."

Still, the farm bill remains a work in progress with congressional committee staffers working now to narrow the issues the four principal House and Senate Agriculture Committee leaders will need to negotiate amongst themselves.

"There's plenty of motivation for the four of us to get this farm bill done," Conaway said.

Conaway notes Peterson also has said he does not want to carry the farm bill into 2019 even if the House flips in the midterm elections.

"He is the one guy you would expect to benefit from a swap like that," Conaway said. "I don't think anyone realistically thinks the Senate will flip, but to Collin's credit, he's said publicly and acted and in his conversations said, 'Let's get this done now.'"

Among the sticking points in the talks remains an issue around base acres.

The House bill allows farmers to update base acres in some areas hit hardest by drought in the past decade, which would include a section of counties in Conaway's home state of Texas. To pay for the $577 million boost in base-acre payments that would cause over the next decade, the House bill drops base-acre program payments for acreage that has not been planted over the past decade. That affects farmers in several states.

Conaway argues, though, the only base acres that would be affected are those that did not have any crop production over the past 10 years, including alfalfa.

"They didn't need to plant program crops, but just plant something," Conaway said.

Under the House bill, the acreage would keep base-acre status, but not receive any program payments under the five-year scenario of this farm bill. Lawmakers working on the next farm bill can decide whether to restart base payments for those acres, Conaway said.

"We're just simply saying those acres that have not been planted over the past 10 years, they should not be in Title I (the commodity title) for this next farm bill," said.

Despite the political focus on work requirements in the House version of the farm bill for people on the Supplemental Nutrition Assistance Program (SNAP), Conaway said there has not been as much focus on the SNAP divisions in the two bills.

"SNAP is part of the problem, no doubt about it," Conaway said. "But it is not 'the' problem. If we fixed SNAP today, I still wouldn't have a farm bill."

House Democrats have set a pretty clear position resisting changes to SNAP that would require able-bodied single recipients to either work or enroll in a job-training program. The House bill also makes it harder for states to expand income eligibility for SNAP recipients.

Sen. Stabenow has taken the view that the Senate version of the farm bill, which got 86 votes, has strong bipartisan support because it does not include most of the House revisions on SNAP.

More attention has been on the commodity and conservation pieces in the farm bill, he said, as well as different pieces of the Rural Development title.

Typically, lame ducks last longer when funding for most of the federal government is hanging in the balance. Since Congress has completed and the president has signed most of the annual spending bills, the overall funding of the federal government shouldn't clog up the lame-duck session. The current Continuing Resolution for those remaining budget issues runs until Dec. 7. That potentially leaves more time for legislation such as the farm bill to pass.

Conaway notes leadership in both the House and the Senate want to see a farm bill completed. Senate Majority Leader Mitch McConnell, R-Ky., placed himself on the conference committee to complete a bill and protect some of his provisions allowing hemp production.

"It's pretty clear that Leader McConnell wants hemp in the farm bill," Conaway said. "I know whatever my Senate colleagues are doing, Sen. McConnell is saying let's get this thing done."

Before Conaway's event on Monday, groups opposed to the House version of the farm bill gathered in Washington, D.C., at the National Press Club to voice their support for the Senate version of the farm bill. Groups opposed to SNAP changes, such as the Food Research Action Center, were represented, as well environmental groups, including the Natural Resources Defense Council and Environmental Working Group, as well as the National Sustainable Agriculture Coalition and the Union of Concerned Scientists.

Ferd Hoefner, former policy director for the National Sustainable Agriculture Coalition, pointed to the 86 votes in the Senate and criticized the House version for as much as $5 billion in cuts to conservation programs at a time for high demand in conservation programs.

Hoefner, though, also added that the base-acre issue goes beyond regional politics. The 1996 farm bill provided payments to producers separate from production. That allowed farmers to put their most environmentally sensitive acres in grass. Dropping those acres from commodity programs would reverse course.

"It takes away the promise of the 1996 farm bill that you can do what's best for your land rather than farming the farm bill," Hoefner said. 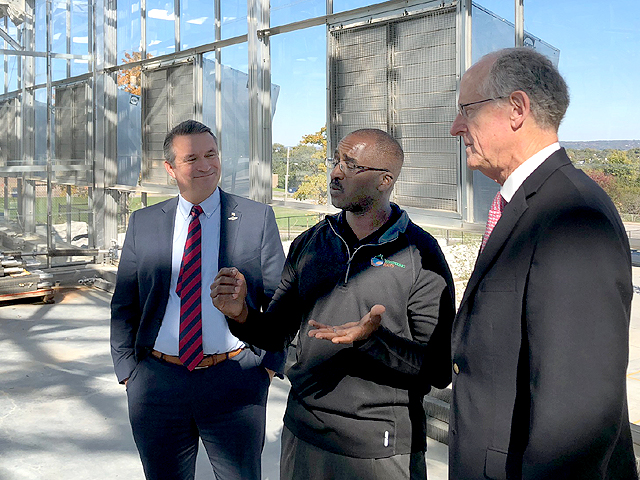