Agriculture Secretary Sonny Perdue on Tuesday announced the aid package, which will be available through three separate programs. Under the plan, farmers growing soybeans, corn, sorghum, wheat, cotton, milk and hogs will be able to apply for tariff aid payments sometime this fall to offset the impact of lost trade markets.

Perdue called the trade response "a short-term solution" that would give President Donald Trump time to work on long-term trade deals that would end the retaliatory tariffs.

Perdue said the $12 billion figure "is directly in line with the estimated $11 billion impact of illegal tariffs on agriculture." The funds will help farmers deal with the costs of lost markets due to retaliation by other countries.

While farm groups largely thanked the White House for the aid, at least some Senate Republicans were among the most vocal critics of the USDA aid plan. Sen. Ben Sasse, R-Neb., noting he represents one of the largest agricultural states in the country, jumped out by calling the USDA plan "trade-war bailouts."

"This trade war is cutting the legs out from under farmers and White House's 'plan' is to spend $12 billion on gold crutches," Sasse said in a statement. "America's farmers don't want to be paid to lose -- they want to win by feeding the world. This administration's tariffs and bailouts aren't going to make America great again, they're just going to make it 1929 again."

"This is becoming more and more like a Soviet-type of economy here: Commissars deciding who's going to be granted waivers, commissars in the administration figuring out how they're going to sprinkle around benefits."

The $12 billion price tag comes after the Trump administration's budget proposal in early February called for cutting several farm programs, including crop insurance. The White House also made no moves during farm bill work in Congress to increase funds for programs similar to those Agriculture Secretary Perdue and USDA will now craft on their own to increase direct aid to farmers, boost purchases for food-aid programs and increase funding for trade promotion. None of those areas get the kind of funding boosts in the House and Senate versions of farm bill that will come in a one-time emergency effort sometime this fall.

DTN's most recent online reader poll asked farmers for their opinions on the tariffs placed on soybeans and other agricultural products by China. The results, from two websites, had 374 total responses. Roughly 20%-22% of respondents agreed with the statement, "I'm concerned about the loss of exports; I expect the administration to compensate farmers for income lost due to lower commodity prices. Another 37%-39% of respondents agreed with that they are concerned about the loss of exports due to tariffs, but believe this is necessary to fix the trade imbalances with China.

"Given the low prices farmers have been facing, the tariff situation is making things worse for producers as we speak," Roberts said. "Trade remains the single best solution to the tough economy in farm country. I will look closely at the president's assistance proposal, but I hope that the administration is also working to quickly resolve the tariff situation and restore the export markets our farmers, ranchers, and growers rely on."

Rep. Steve King, R-Iowa, a member of the House Agriculture Committee, applauded the USDA aid. "President Trump personally promised me that agriculture would be held harmless as he worked on trade, and today's announcement of $12 billion in USDA assistance for disrupted markets confirms his intention to keep his promise to me," said King. "Importantly, the USDA intends to use a Trade Promotion Program to develop new export markets for American agricultural products. These new export markets will remain when the current disputes over trade are settled on terms more favorable to American producers. I applaud the Administration for taking this needed action, and I am confident that President Trump, Secretary Perdue, and Ambassador Branstad are all working diligently to open China's markets to greater trade in Iowa's agricultural products."

Senate Democratic Whip Dick Durbin, D-Ill., said, "Bailouts, tweets, and bragging won't save the lost crop value for our farmers and won't protect their reputations around the world as reliable sellers. The president's scorched-earth trade war has put a lot at stake for Illinois and our rural economy. Soybean farmers in Illinois tell me that since the start of the president's trade war, they've seen their crop value drop by 20 percent. Declaring a trade war on the world, instead of the truly bad actors, leaves a lot of collateral damage."

Sen. Heidi Heitkamp, D-N.D., serves on the Senate Agriculture Committee and is a GOP election target this fall. She said farmers in her state need trade policies that make sense and open up the market for farmers and ranchers. She had also joined in the introduction of legislation that would make farmers eligible for Trade Adjustment Assistance. Still, she was critical of the Trump administration plan and its costs.

"With this announcement, the administration is borrowing $12 billion from taxpayers -- which, given the enormous price tag, still barely compensates for the losses to farmers and ranchers as well as lost markets that will be difficult to just bring back as they took years to create," Heitkamp said, pointing to a study that "shows that corn, soybean and wheat farmers across the U.S. have lost $13 billion because of the administration's trade war."

Heitkamp's North Dakota counterpart, Republican Sen. John Hoeven said the goal of the administration is to gain greater access to markets for farmers and ranchers. Because agriculture has a positive trade balance, U.S. farmers are more heavily affected by retaliatory tariffs, Hoeven said. "That is why we are willing to work with USDA on a short-term program to provide our producers with temporary relief as the administration continues its trade negotiations," he said. "At the same time, however, we continue to press the administration to get better, more fair trade deals in place as soon as possible so that farmers can continue to do what they do best -- provide our country and the world with the highest-quality, lowest-cost food supply in the world."

Rep. Robert Aderholt, R-Ala., chairman of the House Agriculture Appropriations Subcommittee, said the administration took action to stand by farmers and Secretary Perdue had called Aderholt to discuss the details. Aderholt applauded the president for "standing up to China and other foreign governments' unfair trade practices."

"As chairman of the Agriculture Subcommittee of the House Appropriations Committee, I have worked to ensure that protective measures and funding would be available should our nation's agriculture producers be confronted with such abusive policies enacted by foreign leaders," Aderholt said. "Any funds spent will be temporary. This will ensure that our farmers are able to make ends meet while the Trump administration works out more fair deals for farmers, ranchers, and producers who want to sell their products overseas.

Outside of Congress, the Heritage Foundation, a conservative think tank, criticized the administration's trade policy and aid to offset the impacts.

"The Trump administration's plan to provide $12 billion in aid to farmers and ranchers is a misguided attempt to mitigate the harm caused by its tariffs at the expense of taxpayers. Bad policy doesn't justify more bad policy, yet this is exactly what is happening," said Heritage Foundation's trade economist Tori Whiting. "The administration's plan to throw money at a problem that it has created will not increase the freedom to trade in America. In fact, the harm to American businesses, farmers, ranchers, and workers will only worsen as more tariffs are levied. The best way to help American farmers and ranchers is not through wasteful spending, but to ditch the administration's harmful tariff policies and instead focus on increasing access to new markets for producers."

National Pork Producers Council President Jim Heimerl, a pork producer from Johnstown, Ohio, said, "President Trump has said he has the back of U.S. farmers and today demonstrated this commitment with an aid package to sustain American agriculture cutoff from critical export markets as his administration works to realign U.S. global trade policy.

"U.S. pork, which began the year in expansion mode to capitalize on unprecedented global demand, now faces punitive tariffs on 40% of its exports," Heimerl said. "The restrictions we face in critical markets such as Mexico and China -- our top two export markets by volume last year -- have placed American pig farmers and their families in dire financial straits. We thank the president for taking immediate action."

National Milk Producers Federation President (NMPF) and CEO Jim Mulhern said his group "appreciates the president following through on his pledge that America's farmers won't bear the brunt of the economic losses generated by the current trade conflicts. Today's announcement reflects requests that our organization has made of USDA to relieve some of the financial pain dairy farmers are feeling due to lost export opportunities." Mulhern added, "NMPF is also encouraging the administration to conclude the North American Free Trade Agreement (NAFTA) negotiations and pursue new trade opportunities, "which is the long-term solution to the current situation. We need this assistance for now, but we also need new trade deals that allow our farmers to reach customers in other nations."

U.S. Wheat Associates (USW) and the National Association of Wheat Growers (NAWG) said in a joint statement they are glad the administration recognizes farming is a risky business, which is facing additional risk because of trade policies. While saying "tariffs aren't the answer," the wheat groups said they appreciate the president's work to push back on China's unfair trade practices in the World Trade Organization. The wheat groups called for finalizing the NAFTA negotiations and rejoining the Trans-Pacific Partnership.

"We urge the administration to recognize this self-inflicted damage and to end the trade war immediately as well as to work within the rules-based trading system in partnership with like-minded countries to address serious problems in the global economy," the wheat groups stated.

Early Wednesday, President Trump tweeted, "China is targeting our farmers, who they know I love & respect, as a way of getting me to continue allowing them to take advantage of the U.S. They are being vicious in what will be their failed attempt. We were being nice - until now! China made $517 Billion on us last year." 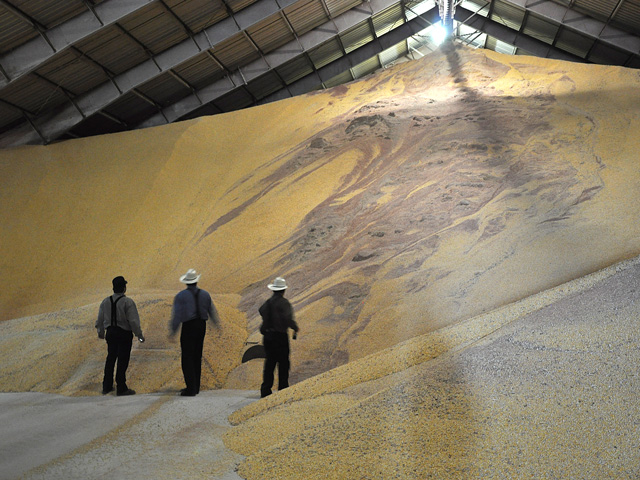