WASHINGTON (DTN) -- House Agriculture Committee Chairman Michael Conaway, R-Texas, said at a forum Tuesday that the House vote on going to conference with the Senate on the farm bill will be held Wednesday or Monday.

Conaway had earlier said he expected the vote would be Thursday, but at an event sponsored by Axios, he said the date has to be changed because House Agriculture ranking member Collin Peterson, D-Minn., cannot be present on Thursday.

He noted the vote is necessary because the Senate stripped the House language out of the bill numbered H.R. 2 and inserted its own bill. Through the motion, the House will object to that and ask for a conference.

Conaway said he does not understand why he is getting so much pushback against the SNAP provision that would require beneficiaries to work 20 hours per week. If he brings up the 20-hour work requirement with farmers and ranchers, they say they work three times that much.

Moderator Mike Allen asked Conaway to respond to a statement by House Minority Leader Nancy Pelosi, D-Calif., that the work requirement is "cruel and destructive," but Conaway said he could not "get myself into their head."

There are 10 million able-bodied adults between the ages of 18 and 59 who get SNAP benefits but do not report income, Conway said. The House bill, he said, would take the benefits that would not be sent to people who should not be getting SNAP benefits and send it to the states to be used for job search or job training programs to help people "get on the ladder of success."

Critics, including Peterson, have said the work requirements are impractical, particularly because many low-income people work at jobs with varying hours. Critics also say hungry people will drop out of the SNAP program because the reporting requirements will be so onerous.

Conaway said he can't understand why senators would oppose the provision when a poll has shown that 70% of Democrats and 90% of Republicans favor the requirements. Those statistics come from the Foundation for Government Accountability, a conservative group that last week praised a White House Council of Economic Advisers report that endorsed work requirements for SNAP and for housing subsidies.

Conaway said he has to get "the message" to senators and House Democrats that they will not want to be the candidates who go home and say they stopped the farm bill because work requirements for SNAP beneficiaries in the bill were too tough.

Conaway said he believes the farm bill will be passed by Sept. 30 when the current bill expires because he grew up in a desert and is an optimist. But he declined to give odds on finishing by that date.

The retaliatory tariffs that China plans to impose on U.S. farm products are "illegal," Conaway said, but he added that "folks back home have to live" with China's action.

Conaway said he has not been given any timeline about assistance to farmers to counter the effects of the trade disputes, but is going to a meeting at the White House this week and believes that the meeting will be about ways to protect farmers from the impact of the retaliatory tariffs. 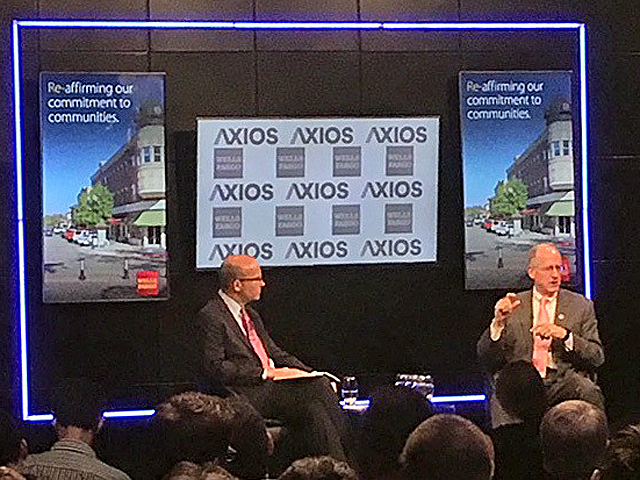