WASHINGTON (DTN) -- Lawrence Haddad and David Nabarro, United Kingdom scientists whose work has led to a reduction in child stunting, were named World Food Prize laureates Monday in a ceremony at the Agriculture Department headquarters.

The announcement was made by Kenneth Quinn, the president of the World Food Prize Foundation, who explained in his remarks that the World Food Prize "is like the World Cup of agriculture," a $250,000 award "given to the person who has scored the most goals in terms of reducing hunger and malnutrition around the world."

Considered a pioneer in food policy research, Haddad was head of the Institute of Development Studies in the United Kingdom before taking over as executive director of the Global Alliance for Improved Nutrition in 2016.

Nabarro has been a champion of public health in the United Nations and led a UF initiative in response to the 2008 food-price crisis with a task force on global food security. He then was responsible for uniting 54 countries under the Scaling Up Nutrition Movement.

Quinn cited Haddad and Nabarro for "their individual and complementary global leadership," who "elevated maternal and child undernutrition as a central issue within the food security and development agenda at national and international levels, with extraordinary results."

Quinn added, "Together, our 2018 Laureates' work significantly improved nutrition for mothers and children in the critical first 1,000 days of life -- the period from pregnancy to a child's second birthday. For it is during this period that without sufficient nutrition, mental and physical stunting occurs. And as the celebrated author Roger Thurow, who is with us today, has said, 'Stunting is a life sentence of underachievement and underperformance.'"

Quinn cited that Haddad and Nabarro's work helped reduce the number of stunted children by 10 million in the years between 2012 and 2017.

Haddad, the executive director of the Global Alliance for Improving Nutrition, was called a pioneer in food policy research "who brought the issue of nutrition to the forefront by using both economic and medical research to convince development leaders to make child nutrition an urgent priority in the global food security agenda."

Bill Gates, co-chair of the Bill and Melinda Gates Foundation said, "Like Dr. Norman Borlaug before them, Drs. Haddad and Nabarro have dedicated their careers to reducing hunger and malnutrition. Their work has deepened our understanding of nutrition's impact not only on individual health, but on human capital and economic growth -- compelling leaders in countries across the world to invest in evidence-based solutions."

Nabarro was called a champion of public health in the United Nations, who "was directly responsible for uniting 54 countries and one Indian state under the Scaling Up Nutrition Movement to join forces and implement evidence-based policies and programs."

The World Food Prize began in 1996 and since then has named 46 laureates.

Haddad and Nabarro will receive their prizes during the Borlaug Dialogues in Des Moines Oct. 17-19. 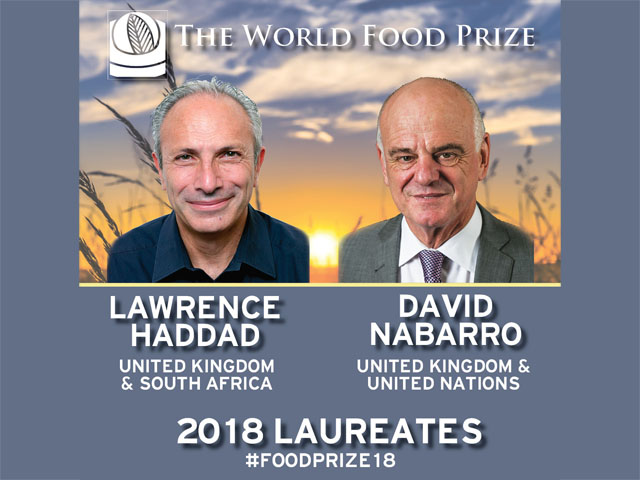