OMAHA (DTN) -- While President Donald Trump continues to express his undying love for the ethanol industry, Trump's EPA continues to march in a different direction.

A group of panelists representing the three major biofuel groups in the country -- Growth Energy, the Renewable Fuels Association and the American Coalition for Ethanol -- told an audience at the Fuel Ethanol Workshop and Expo in Omaha on Tuesday they are ready to continue fighting.

John Fuher, vice president of government affairs for Growth Energy, said Trump has brought something to the table the ethanol industry has never experienced.

"What has happened in the last six months is the communications with the White House is something we never had before," Fuher said. "The president is taking a personal interest. He sees this as something where he could be a dealmaker. This White House interest has been a new intrigue. We need to go through the legal process so we can impact this process. What EPA is doing is outright egregious."

Namely, a number of ethanol and agriculture groups filed two separate lawsuits in recent weeks in an attempt to challenge the EPA on an expanding number of small-refiner waivers to the Renewable Fuel Standard. In addition, the industry is pressing the EPA to uphold Trump's promise to allow year-round E15 sales.

As a result, there has been a flood of renewable identification numbers, or RINs, hitting the market. Obligated parties are required to either buy the biofuel credits or actually blend physical ethanol gallons.

"We have a huge stockpile of RINs available," Cooper said. "We're seeing suffering demand domestically. With 1.6 billion gallons, what is the impact? About $2.5 billion worth of ethanol and about 570 million bushels of corn. That is about a $5 billion loss to the people in this industry. There needs to be a stop to the exemptions right now. We need some repair for the damage that has already been done."

Brian Jennings, CEO of the American Coalition for Ethanol, said the ethanol industry doesn't know all that EPA Administrator Scott Pruitt has done on the RFS.

"The president has made a commitment, and he's (Pruitt) not fulfilling the promise the president made to the RFS," Jennings said. "Sixty days ago the president said he would allow year-round E15. It is now the RVP season and retailers are not supposed to offer E15. I hope this administration gets a little truth serum. We don't take the decision to litigate against the administration lightly. It is expensive and time-consuming. The value is making sure a precedent is not set. When you have the law on your side, we have to stand up for ourselves."

Trying to ease some industry concerns, Pruitt was in Kansas on Tuesday touring an ethanol plant and meeting with farmers about the RFS. Pruitt reportedly will be in South Dakota on Wednesday where the South Dakota Corn Growers is planning a rally to send a message to Pruitt to support E15.

Jennings said if the ethanol industry's future is in high-octane fuels and there is a policy mechanism where the industry can be undermined, it will set a bad precedent in the future.

"Fixing RVP (Reid vapor pressure) is not a question of good policy at EPA," he said. "Political appointees understand the law can be interpreted differently. RVP relief is held hostage by Scott Pruitt. E15, RVP relief in itself isn't going to be a silver bullet."

The EPA has the authority to conduct emergency rulemakings that could lift the year-round restriction on E15, he said.

"It could be fixed in a matter of weeks," Cooper said. "All indications are this EPA will undertake a rulemaking process that is conventional."

That means a rule allowing E15 year-round likely would require a minimum of 90 to 120 days to approve a final rule.

"That is far and away the largest barrier to expanded ethanol consumption in the U.S.," Cooper said. "The RVP restriction on E15 absolutely needs to be alleviated. It took 30 to 35 years for E10 saturation."

Last summer there was a bill introduced in Congress to grant RVP relief to ethanol blends E15 and higher.

"We want RVP to be applicable to other blends," he said. "We don't want this mess again."

Though the RFS has been an important economic driver for biofuels and rural America, the panelists said the wave of the future may be in low-carbon fuel standards.

Ten years ago when the state of California launched its LCFS, it was met with lawsuits by the ethanol industry because the policy excluded corn-based ethanol from the state's fuel pool.

"There were a lot of unknowns and fear from our industry," Cooper said.

As a result of a long legal battle, the California Air Resources Board made adjustments to the program to allow Midwest ethanol producers to demonstrate the carbon-reducing qualities of the fuel they produce. Cooper said the industry continues to battle the state's use of the theory of indirect land use change in their carbon calculations. The theory is the expanded demand for corn to produce ethanol, is leading farmers around the world to shift grasslands and other crops to corn production as a result.

"The program was vastly improved and turned into a value driver for the industry," he said.

Now, Midwest producers are seeing an expanded volume of ethanol exported to California and a growing interest in that state for higher ethanol blends such as E15 as well as ethanol produced using corn kernel fiber.

"As the curve gets steeper in California, CARB will need to allow more ethanol in the state," he said.

Jennings said he believes it is time for Midwestern states to consider setting low-carbon fuel standards that suit their economies.

In recent years, the ethanol industry has seen record exports, while producers at home struggle with inconsistency in federal biofuel policy.

The Trump administration's recent trade battles with China, Canada and others have caught the ethanol industry's attention. Although the administration recently rejected a proposal to attach RINs to exported ethanol, the industry panelists said they suspect the proposal will come up again as long as Pruitt heads the EPA.

"Attaching RINs to exports would ruin our exports," Jennings said.

Cooper said that long before Pruitt's EPA resurrected the RINs export idea, trading partners including Canada said they would file a trade challenge with the World Trade Organization if the proposal became a reality.

"I can't say we're at a 100% comfort level with our export market," Fuher said. "We need to pay attention to the rhetoric on trade. It will impact the industry." 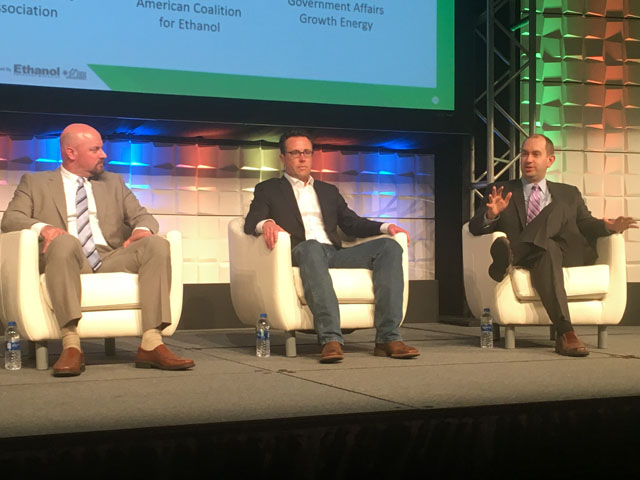