WASHINGTON (DTN) -- Republican and Democratic senators praised Agriculture Secretary Sonny Perdue on Tuesday for his advocacy on agriculture within the Trump administration, but urged him to be a stronger voice.

In an opening statement at a hearing entitled "The State of Rural America," Senate Agriculture Committee Chairman Pat Roberts, R-Kan., said, while it makes sense to "take a look" at the North American Free Trade Agreement and to hold trading partners such as China accountable to their World Trade Organization commitments, "trade actions like those we have seen on steel, aluminum, washing machines and solar panels also put the U.S. at risk of retaliatory measures that harm jobs, not only to agriculture but across all sectors."

"History has shown us that far too often it is agriculture that bears the brunt of that harm," Roberts said. "I hope that the United States and China can work aggressively to resolve these issues before we enter a full-blown trade war."

Senate Agriculture ranking member Debbie Stabenow, D-Mich., added, "I share Chairman Roberts' concern on this. I believe we need tough trade enforcement when countries break the rules -- but we must do everything we can do ensure there are no unintended consequences for our farmers.

"The impact of retaliatory tariffs would be felt by farmers directly and indirectly. It doesn't just impact Washington state when the state can no longer ship apples to China -- it makes it harder for Michigan farmers to market their apples at a price that keeps them in business."

But Stabenow added that "a flood of imports from Turkey is harming our cherry industry," and told Perdue that she has called on USDA "to protect our cherry growers from unfair imports by approving a bonus buy -- and I urge you to take action on their request."

Stabenow said she appreciates Perdue's advocacy within the administration, but she noted that the White House had proposed budget cuts Congress rejected and said, "maybe we need to get you a megaphone because not everyone in the administration seems to be getting the message that we need to do more to improve the quality of life in rural America -- not less."

(Sen. David Perdue, R-Ga., the secretary's cousin, said later in the hearing that the secretary does not need a megaphone.)

The Agriculture secretary limited his opening statement to acknowledging that times are bad in rural America and that he understands the anxiety of farmers about trade.

Roberts noted that in trade negotiations any remarks are sensitive. Kansas sorghum growers were in his office the day President Donald Trump announces the tariffs on solar panels and China retaliated with sorghum tariffs, and one grower told him that he had lost 80 cents on the dollar, Roberts said.

"In some cases we are using farmers, ranchers, growers as a pawn," Roberts said.

Perdue responded that Trump has a "unique" negotiating style that he hopes will work, but that in any case "I am not going to let them be the casualties."

When Stabenow asked about trade, Perdue reminded her that the Michigan auto industry has been a loser under trade liberalization, but Stabenow responded that, while the trade situation is complicated, negotiations need to be done "in a very thoughtful way."

Sen. John Thune, R-S.D., said he wanted to go on the record in opposition to the Trump administration's proposed "ad hoc" payments to farmers if they are hurt by trade policies.

In what might be considered a summary of statements she is likely to make in her campaign for re-election, Sen. Heidi Heitkamp, D-N.D., told Perdue that rural America faces the challenges of one of every three counties having "high poverty rates, lower farm and an aging population."

The administration's messages on trade policy, Heitkamp said, "are not appropriate in a world in which the United States has only 5% of the world population."

"We need a robust, pro-agricultural vision," Heitkamp said. "You present that. We don't hear that coming out of the White House."

Sen. Amy Klobuchar, D-Minn., led off the discussion of concerns about the Renewable Fuel Standard and the waivers from it that the Environmental Protection Agency has granted to some refiners.

Perdue acknowledged that he believes the waivers have led to a reduction in the legally mandated 15 billion gallon use of corn ethanol, but reminded the senators that his influence is limited to talking to the president and EPA Administrator Scott Pruitt.

Sen. Joni Ernst, R-Iowa, said that Pruitt had promised her that he would follow the law and its intent, but that she believes he is "trying to work his way around that."

Sen. Charles Grassley, R-Iowa, thanked Perdue for his help in convincing the Trump administration that E15 should be sold year-round. (E15 is gasoline blended with 15% ethanol.)

At the end of hearing, Roberts asked for and got a commitment from Perdue that he would support efforts to have the Agriculture Department run the National Bio and Agro-defense Facility (NBAF) under construction in Manhattan, Kan., to replace the facility on Plum Island, N.Y.

NBAF is being built by the Homeland Security Department but Perdue said his "vision" is that USDA's expertise makes it the right department to operate it while maintaining a partnership with Homeland Security. 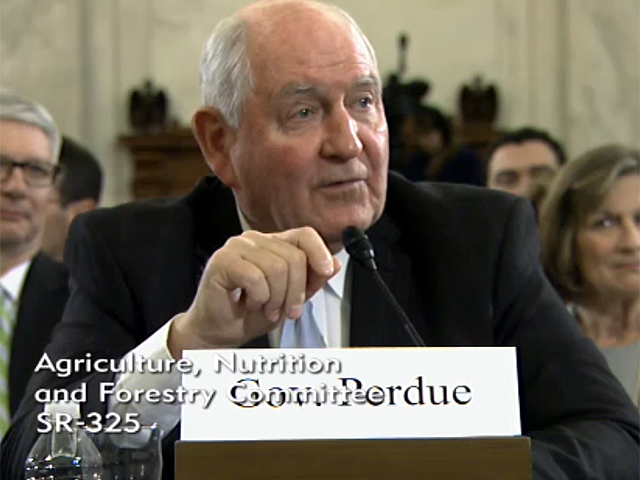