OMAHA (DTN) -- The U.S. Environmental Protection Agency continues to look at whether it can approve the use of E15 year-round, EPA's Administrator Scott Pruitt said on Tuesday during his first appearance before the U.S. Senate Environment and Public Works Committee.

As members of Congress continue to explore possible reform to the Renewable Fuel Standard and amid pressure from petroleum refiners to waive RFS requirements, the expansion of the E15 market continues to be a top priority for the ethanol industry.

Allowing year-round E15 sales would bolster demand for corn, and as a result, would boost markets for other feedstocks used for cellulosic ethanol and other advanced biofuels.

"This is not a policy issue," Pruitt told the committee, "it's about the determination of legal authority. The process of internal review continues. We are working to get an answer as soon as we can."

Federal law currently forbids the sale of E15 from June 1 to Sept. 15. The ethanol industry continues to push for EPA to extend the waiver for Reid Vapor Pressure, or RVP, to E15. Currently, E15 sales are restricted in nearly two-thirds of the country during the summer months because of ozone concerns.

In addition, Pruitt told the committee he understands ethanol's place in a high-octane future.

Brian Jennings, CEO of the American Coalition for Ethanol, said his group was encouraged by Pruitt's testimony.

"ACE members are grateful Administrator Pruitt is committed to completing the review of EPA's legal authority to provide RVP relief for E15 and higher blends and that he reiterated the agency's interest in how high-octane fuels can meet fuel efficiency standards," Jennings said in a statement.

"RVP relief is not only a common sense step EPA can take to provide regulatory relief to fuel marketers, it is also the quickest way to take pressure off RIN (renewable identification number) prices. E15 blending nationwide will increase ethanol blending, which will increase the supply of RIN credits and help bring down their price."

While a number of senators thanked Pruitt for work underway to replace the waters of the United States, or WOTUS, rule, the administrator also was grilled on a number of fronts.

"I anticipate the proposed substitute will be out by April," Pruitt said, and finalized by the end of 2018.

Pruitt faced questions about transparency involving the public sharing of his schedule, travel expenses, repeal of the Clean Power Plan, budget cuts to the agency that may affect a variety of programs, his agency's handling of scientists serving on agency boards, and other issues.

Sen. Tom Carper, D-Del., outlined a litany of concerns he has about Pruitt's EPA.

As part of repealing and rewriting the WOTUS rule, Carper said, the EPA has removed important information from its website.

"Mr. Pruitt, you say over and over again that, 'process matters,'" Carper said. "Do you really think that verbally directing career staff at EPA to delete the inconvenient economic benefits of the Clean Water Rule is a good rulemaking process, Mr. Pruitt? Do you think that ignoring the advice of EPA scientists helps us clean up our nation's water?"

"Similarly, EPA has moved to repeal the clean water rule, but again, with no new plan to protect the drinking water sources on which 117 million Americans rely," Carper said.

Pruitt testified that much of the work his agency is doing is to create more regulatory certainty for the broader economy.

Carper said the record shows the agency has moved on repealing, reconsidering or delaying at least 25 environmental regulations in the past year.

"Those aren't achievements, Mr. Pruitt," he said. "Those are the exact opposite -- clear failures to act. The state of our environment is also fundamentally linked to the state of our climate. And what did we see in 2017 alone? The second-hottest year on record."

In his written testimony, Pruitt outlined the EPA's three primary goals. That is to refocus the agency back to its core mission, restore power to the states, and "adhere strictly" to the rule of law.

In addition, Pruitt said the agency will continue to expand the work it does with the states.

"Cooperation and shared responsibility between states, tribes, and federal government is a bedrock in the environmental laws that Congress enacted," he said.

"States have assumed more than 96% of the delegable authorities under existing federal law. This administration will undertake a series of initiatives to rethink and assess where we are and where we want to be with respect to joint governance. EPA needs to be a better partner to the states, which all have unique challenges and needs when it comes to meeting environmental goals." 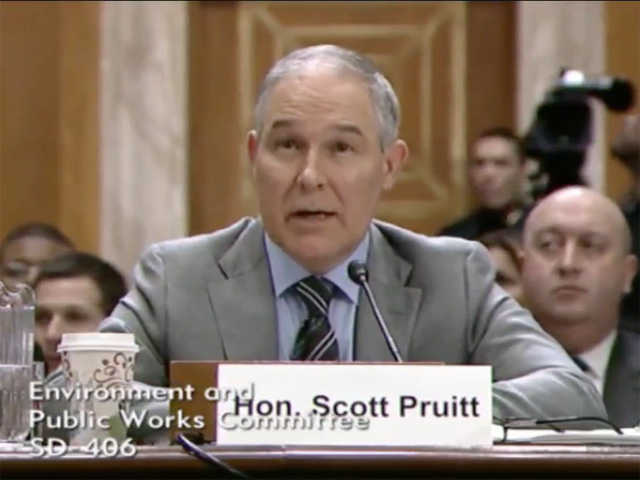