However, he declined to comment on consideration of a controversial proposal to provide relief to Florida tomato growers who have said imports of Mexican tomatoes are damaging their businesses.

"We will not go backwards ... on my watch," Doud said in response to questions during a confirmation hearing at the Senate Finance Committee Thursday. But he added that he has "not been briefed" on the details of "perishable product" negotiations.

Florida growers have asked the Trump administration to put forward a proposal that would allow them to use trade remedy laws to address imports from Mexico that come in during the season that Florida produces tomatoes. But other sectors of agriculture have expressed alarm that Mexico might demand similar treatment for certain products, particularly apples because the Mexican apple industry has also complained about competition from imports.

Sen. Maria Cantwell, D-Wash., noted that Washington state apple exports to Mexico have skyrocketed under NAFTA, and said she is worried about "seasonal provisions."

Doud said it is hard to overstate the importance of NAFTA, but that "there are things we can upgrade" including U.S. dairy access to the Canadian market.

In his opening statement, Doud said the United States needs to be on the offensive in Asia.

"One area where work is needed is Japan," Doud said.

"We are at a particularly critical juncture in terms of our competitiveness for U.S. meat exports into Japan. Failure to address this situation immediately does not bode well for our fiercely competitive and rapidly expanding production of beef, pork and poultry. In fact, this is not only true for Japan but for all Southeast Asia as well."

Under questioning, he also said that the issue of European Union demands for geographical indicators for cheese, meat and wine are "a top priority."

In his statement, Doud recalled, "Growing up on the farm in Kansas, I have vivid memories of the economic difficulties that followed the decision to embargo U.S. sales of wheat to the Soviet Union.

"After graduate school, I jumped at the opportunity to work for US Wheat Associates, which immediately exposed me to the multitude and complexity of challenges that we face in selling our wheat overseas," Doud said.

"As chief economist of the National Cattlemen's Beef Association I spent each day for over seven years coordinating industry efforts with USTR, USDA and even our State Department as we slowly rebuilt our beef exports, from virtually scratch, in the aftermath of the single BSE [mad cow disease] cow that stole the Christmas of 2003."

Doud also noted that he had served as a "cleared adviser" and later chairman of the USDA/USTR Animal and Animal Products Agricultural Trade Advisory Committee when trade agreements with Australia, Bahrain, Colombia, CAFTA, South Korea, Morocco, Panama and Peru were negotiated.

But despite Roberts' enthusiastic endorsement, the chairman pressed Doud hard to promise to "do no harm" in trade negotiations and to try to bring stability to the Trump administration's trade policy, which he described as more "ideological" than most.

The committee also heard testimony from nominees Jeffrey Gerrish to be deputy U.S. trade representative, and Jason Kearns, a Democrat nominated to be a commissioner on the International Trade Commission.

Gerrish faced intense questioning over his decision to vote in Virginia in the 2016 presidential election even though he had moved to Maryland more than four months earlier. Gerrish said he believed he was within Virginia's grace period for voting after moving, but that in fact lasted only 30 days.

"Mr. Gerrish voted where he shouldn't have. It's that simple," Senate Finance Committee Chairman Orrin Hatch, R-Utah, said in an opening statement.

Kearns, a former employee of the House Ways and Means Committee and the Office of the U.S. Trade Representative, noted that he grew up in a small town in Colorado "where I learned to enjoy hard work, whether it was the midnight feedings of my 4-H lambs or being the first kid at my high school in the morning to work on my jump shot."

Jerry Hagstrom can be reached at talk@dtn.com 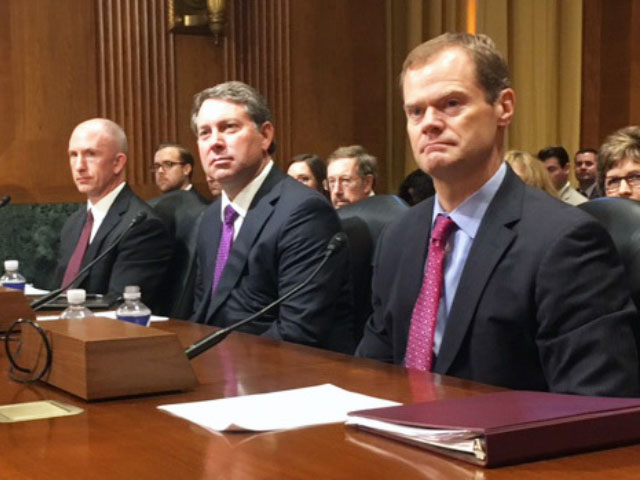