OMAHA (DTN) -- A group challenging the administration of checkoff programs in agriculture has asked U.S. Secretary of Agriculture Sonny Perdue for a meeting to make its case for transparency and more federal control of those programs.

In a letter to Perdue on Wednesday, Mike Weaver, president of the Organization for Competitive Markets, said the group has uncovered a number of issues with the programs.

OCM filed a lawsuit in 2014 demanding the release of some 9,300 pages of documents related to the USDA's Office of the Inspector General investigation into the beef checkoff program. The documents stem from two OIG audits of the beef checkoff and its contractors, including the National Cattlemen's Beef Association.

For years, questions have been raised by groups such as OCM about whether millions in checkoff dollars are used properly by industry representatives.

The OIG's first audit report did find contractors to be in compliance with laws that protect checkoff funds. Then OIG issued a corrected final report that withdrew that finding.

In the letter to Perdue, Weaver said his group has found additional problems with another checkoff program.

"OCM, working with other organizations, has uncovered the most recent issue within the dairy checkoff program," the letter said.

"According to federal law (7 US CODE §4514), the program is required to submit an annual report to Congress outlining the expenditures, activities and effectiveness of the program. This report has not been drafted nor filed for five years, keeping dairy producers in the dark about how their hundreds of millions of tax dollars have been spent over this time period. This is just one example of the lack of transparency and accountability of the checkoff programs."

Weaver said checkoff programs collect nearly $750 million in taxes from farmers and ranchers and "yet the government - their government - fails to provide the basic safeguards for these tax dollars as it does for other taxes collected."

OCM has requested the release of USDA documents related to a 2012 audit of the beef checkoff.

"Unfortunately, USDA refused to do so, leaving OCM with no other option but to bring a FOIA (Freedom of Information Act) complaint in an effort to force transparency," Weaver said.

"It is important to note that these mandatory checkoff fees are collected by agencies of the USDA and are the responsibility of the Agricultural Marketing Service (AMS) to oversee as clearly outlined on AMS's own website: 'AMS provides oversight, ensuring fiscal responsibility, program efficiency and fair treatment of participating stakeholders.'"

Weaver said in the letter that checkoff funds are not producer funds, "but are government funds derived from farmers and ranchers paying a mandatory fee to the government," meaning USDA "has the responsibility to ensure the checkoff programs are accountable, transparent and without conflicts of interest.

"Yet, the previous administration failed to do so," the letter said.

"Mr. Secretary, OCM and the family farmers and ranchers who pay into these government programs respectfully request a meeting with you. We believe you have a unique opportunity. It was the previous administration that failed the farmers and you now have a chance to make these programs work for those who are paying these taxes."

The group has requested the meeting prior to USDA turning over administration of the Grain Inspection, Packers and Stockyards Administration, or GIPSA, to the AMS.

"Further, we request you delay your final decision to move the administration of GIPSA to AMS until the conclusion of this meeting," Weaver said in the letter.

"This will allow America's family farmers, ranchers and dairy producers a chance to be heard."

The USDA initially conducted an audit of the beef checkoff program in 2013. The OCM filed a FOIA request and the OIG withdrew the audit and re-released it in 2014.

The initial audit included a statement saying The National Cattlemen's Beef Association was in full compliance. When the audit was re-released in 2014, the statement was removed.

NCBA has questioned OCM's motives because it receives funding from the Humane Society of the United States. 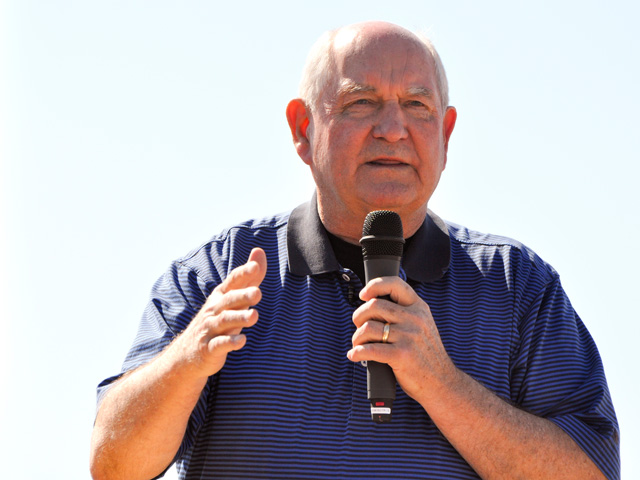