OMAHA (DTN) -- Though United States agriculture soon would like to see a bilateral trade agreement reached with Japan, Sen. Charles Grassley, R-Iowa, told reporters Tuesday he doesn't see that happening in the near future because of ongoing efforts to renegotiate the North American Free Trade Agreement, or NAFTA.

The urgency to secure such an agreement with the Japanese came about as a result of President Donald Trump's administration backing out of the Trans-Pacific Partnership earlier this year.

What's more, that urgency may have heightened a bit as a result of Japan and the European Union signing an economic partnership agreement in July.

According to press reports, Japanese duties on processed pork are expected to be phased out in the next five years. This is similar to what the U.S. was negotiating with Japan through the TPP.

Grassley told agriculture journalists that he's not aware of any similar bilateral negotiations taking place between the U.S. and Japan at this point.

"The NAFTA timetable is aggressive," he said, "with two more rounds before the end of September. It's more important to negotiate a good deal. The Trump administration must negotiate a deal that Canada and Mexico can agree to and that Congress can pass. There are many aspects of the economy that NAFTA touches.

"Trump now has the opportunity to set new standards on trade agreements."

As for a bilateral agreement with Japan, Grassley said having the U.S. trade negotiator tied up with NAFTA makes it difficult to achieve.

"It has to be negotiated at the lower levels," he said, "because the trade negotiator is spending his time on NAFTA, and once Great Britain leaves the EU then we need to pursue a bilateral agreement. I haven't heard of any negotiations moving forward (on Japan, Great Britain). I don't think any trade agreement can be accomplished real easily."

Because of the 2018 presidential elections in Mexico, Grassley said the U.S. needs to move quickly on NAFTA.

In addition, the U.S. dairy industry has expressed concern about access to Canada's markets. For starters, Canada over-quota tariffs on U.S. imports stand at 24% for fluid milk, 201% for skim milk powder, 298% for butter and 245% for cheese.

Tom Vilsack, former U.S. secretary of agriculture and current president and CEO of the U.S. Dairy Export Council, told a congressional committee in July that U.S. negotiators need to move fast to resolve problems with dairy access to Canada's markets.

Earlier this year Canada set a new pricing scheme that he said "essentially wiped out" an export market for ultra-filtered milk.

"Canada argues that they import large quantities of U.S. dairy product," Vilsack told Congress. "However, what Canada is not transparent about is how these imports are coming under a report program that forces the equivalent amount of dairy coming into Canada to be re-exported in many cases back to the United States."

According to the U.S. Dairy Export Council, U.S. dairy exports to Canada totaled $631.6 million in 2016, an increase of 14% from the previous year.

Grassley said it may not be necessary to take care of the dairy issues prior to passing a new NAFTA.

Grassley said a number of closed-door meetings have been held by staffers for a variety of committees, in the event that Congress will move forward with tax reform yet this year.

"The necessity, as well as the failure on health care, makes it important to get something done as a victory for this Congress and for greater economic growth," Grassley said. "I look forward to the opportunity to have real tax debate in regards to tax cuts and tax reform."

Most of these credits are aimed at developing advanced biofuel technologies, including cellulosic ethanol. A number of companies have launched commercial production at a handful of plants across the country.

Grassley said if Congress is unable to achieve broader tax reform, there likely would need to be a separate bill by year's end to extend the biofuels tax provisions. 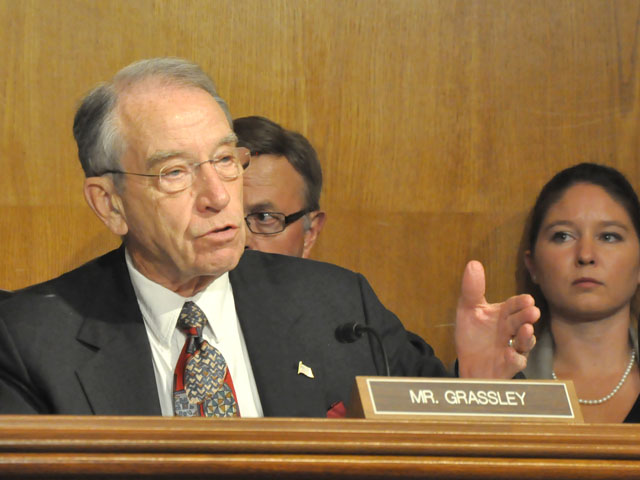