WASHINGTON (DTN) -- The Senate Appropriations Committee on Thursday passed a fiscal year 2018 Agriculture appropriations bill that would provide new aid to both cotton and dairy producers.

The bill would designate cotton seed as eligible for the Price Loss Coverage program while also propping up the Margin Protection Program for dairy farmers.

A summary of the bill's highlights distributed by Senate Appropriations Committee Chairman Thad Cochran, R-Miss., noted that "The bill includes a provision which seeks to address the ongoing economic challenges facing U.S. cotton producers, and the entire U.S. industry, by designating cotton as an 'other oilseed' under Title I of the 2014 farm bill. This would allow cotton producers to participate in the Price Loss Coverage (PLC) program just like all other major U.S. commodity producers."

Cotton producers have urged both former Agriculture Secretary Tom Vilsack and current Secretary Sonny Perdue to declare cotton seed an oilseed, but each has said that the USDA general's counsel office has advised that the secretary does not have the authority.

National Cotton Council Chairman Ronnie Lee, a Georgia producer and ginner, thanked Cochran "for his strong leadership on this issue" and said the policy, if enacted, "would apply beginning with the 2018 cotton crop, the last year of the current farm bill, and would help address the significant economic challenges currently facing America's cotton farming families."

"Both policy initiatives are needed to help U.S. cotton farmers deal with the ongoing financial stress and bridge the policy gap for cotton until the new farm bill is implemented," Lee said.

Senate Appropriations ranking member Patrick Leahy, D-Vt., said in a news release that the bill includes provisions to improve the effectiveness of the Margin Protection Program and offer greater incentives for farmers to participate in the program.

Making these changes now rather than waiting for the farm bill next year allows USDA to implement these changes for a portion of the 2018 calendar year, Leahy said. If dairy farmers are forced to wait until the farm bill expiration next fall, it is unlikely that USDA would be able to implement any of these greatly needed changes until 2020, he added.

"These are crucial investments for dairy farmers who should not have to suffer through yet another year of a risk management program that falls short of providing an effective farm safety net," Leahy said. "I am hopeful that we can move forward from this starting point and first step, to reach a final bipartisan agreement that delivers an effective farm safety net to our nation's dairy farmers and cotton producers."

The House funding bill does not have similar provisions for cotton or dairy. These funding bills will have to eventually be reconciled before USDA is funded for fiscal-year 2018, which begins in October.

1. "Moves the Margin Protection Program (MPP) calculations and potential payments to a monthly basis (currently bimonthly) to improve the program's accuracy and timeliness in responding to market conditions.

2. Dramatically reduces the premium costs for Tier I enrollment to incentivize producer participation at meaningful coverage levels of protection.

3. Adjusts the Tier I threshold level corresponding to substantially lower premium costs, to the first 5 million pounds of production, up from the current level of 4 million pounds of production (equivalent to 185 cows). This will better align the program with the median U.S. dairy farm size, 223 cows, and encourage more farms to participate and secure meaningful levels of protection to offer an effective farm safety net.

4. Waives $100 administrative fees for underserved producers, bringing the program in line with other USDA programs with similar service fee waiver, such as the Noninsured Crop Disaster Assistance Program (NAP).

5. Continues the program's current regulation offering farmers a one-time election to participate in the program for the length of the farm bill."

The manager's amendment offered by Senate Agriculture Appropriations Subcommittee Chairman John Hoeven, R-N.D., included $896,000 to operate the Office of the Undersecretary for Rural Development and added language amending the 1994 Agriculture Reorganization Act to say that the secretary "shall" establish that office, even though the Trump administration has already moved to abolish that position.

Sen. Jon Tester, D-Mont., said during the markup that even though he is pleased with the job that Perdue is doing, "one of the problems is that you have a president who has only known urban America."

Tester said, "I look forward to the president putting up a nominee and I hope he does."

Perdue told DTN on Thursday that he considers the provision to be a matter of "nomenclature." Noting that he has established the position of assistant for rural development in his office and named Anne Hazlett, a former Senate Agriculture Committee aide, to that position, he said Hazlett will do a good job whether she is an assistant to him or an undersecretary.

Perdue said he still considers that having an assistant in his office reporting directly to him to be an "elevation" of the post, while senators have said they believe an undersecretary has more authority.

The committee also adopted by voice vote an amendment offered by Sen. Lisa Murkowski, R-Alaska, to require labeling of genetically modified salmon, and one offered by Sen. Tom Udall, D-N.M., to forbid USDA from inspecting horses under the Federal Meat Inspection Act.

Sen. Jean Shaheen, D-N.H., offered, but then withdrew an amendment to end nonrecourse loans for cane and beet sugar to any entity that makes more than $300 million.

Shaheen said she realized that she was "tilting at windmills here" because she did not have the votes to get the measure through the committee.

"Like you I fight for my constituents," she said, noting she wanted to "put folks on notice ... [that] this is a program we need to look at" because she believes the higher prices for sugar have led to job losses in the sugar-containing products industry.

Hoeven said, however, that the program is needed because Mexico and other countries can "dump" sugar into the U.S. market with the European Union remains closed off to imports.

The major provisions of the bill are listed in a summary on the Senate Appropriations Committee website. http://dld.bz/… 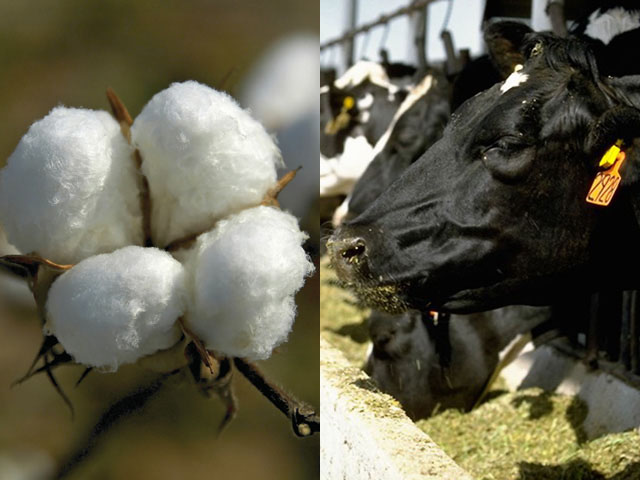